Rob:  This might not be a quirk so much as an affliction, but I call it the 100-word rule. If I can get 100 words down before I’m fully awake, before I do anything else, then I can keep coming back and writing all day. But if I miss that window, sometimes I can’t write at all.

Rob:  Some writers I love, and from whom I hope I’ve been able to take some cues...Cormac McCarthy. His novels feel like narrative poems, and I wish I could steal that lyricism for my own. His feel for the west, and for landscapes, amazes me. Dennis Johnson, also a very lyrical writer, and he writes with a lot of heart. He has this talent for imbuing even his vilest characters with enough humanity that you empathize with them. William Gibson...his precision and ability to nail a big idea with a single detail. Also his affinity for using subaltern characters as windows into big social constructs. Kerouac, Ginsberg, Bukowski, too. And Borges and Marquez. And Fitzgerald. I don’t know if I claim all these as influences exactly, but I remember specific moments with all of them when I thought, I want to do THAT. I want to write.

Rob:  Well, both. I spend a lot of time plotting and taking notes when I’m not sitting at my desk writing. And then when I do sit down and start writing, I veer off the rails and head off in directions I hadn’t planned. Which is really inefficient, because a lot of those directions don’t work out. It means a lot of rewriting, but I don’t really know how else to do it. Whatever I plot, though, is basically guaranteed not to wind up in the book.

TQ:  What inspired you to write Seed?

Rob:  I grew up loving sci fi, so that’s what I wanted to write. But I wanted to build a world framed by real and pressing issues. I also had Brood and Hondo in mind from a short story I’d written. I love those two. I wanted to write about them, and they inhabit a very specific kind of world. They were my point of departure.

TQ:  What sort of research did you do for the novel?

Rob:  Most of the research centered on climate change and biotech. I wasn’t particularly concerned with putting technical details in the story (in fact I found that the places where I did delve too much into the technical it broke the rhythm of the story telling, so I took a lot out), but I wanted the look and feel of the world, no matter how weird or extreme, to fall within the range of what’s possible. There was also a lot of random research, like platoon-level combat tactics, military terminology, Chicano slang, MexiAmerican history. Things like that.

TQ:  Why did you set Satori in Denver, Colorado?

Rob:  I grew up in Colorado, and my feelings about Denver are deeply ambivalent. I’ve lived there several times. Sometimes I love the place, sometimes I hate it. But I know it well, and it definitely gave me a perverse thrill to envision downtown subsumed by this giant, living, sweating amoeba-like thing. It also makes sense in terms of the story. Satori needs lots of water, and Denver has good access to water, even in drought conditions, from snow runoff. Satori also gets a lot of her energy from photosynthesis, and Denver is nothing if not sunny. It’s also central, on the edge of the planes, so it made sense to think of Denver as an efficient place from which to distribute seed.

Rob:  Brood and Hondo Loco were a blast to write. They’re really funny when they banter, which was fun to hang out with. Doss was fun, too, because she basically kicks ass every time she’s on the page. When I came to her chapters, the question was always, “who’s she going to fuck up this time?” Sumedha was difficult, because he’s not exactly human, so I had to really work to sink into his mind. His thinking is perfectly linear, which limited the prose in his POV. I couldn’t use analogies, or if I did I had to be sneaky about it.

Rob:  Maybe the scene when Doss is in the Corn Mother’s oasis. Or when she goes to battle at the end. Any time she and her troops jump from the Flylights, fun stuff goes down. Also any scene where Brood and Hondo are together. Also the scene where Brood does ceremony with Anna’s crew. That’s probably the moment closest to the emotional heart of the book. Or his scene at the end. I guess I like a lot of the scenes. I can’t pick just one.

Rob:  I’m working on a book tentatively title Angel City. It’s about a kid, Louis, growing up in a weird future LA where media is beamed straight into peoples’ minds through neural implants called Angels. Louis is a drug dealer of sorts, but instead of a drug he sells a technique he’s discovered for tapping the Angel straight into our pleasure center. He runs afoul of a corrupt cop, and hijinx ensue

Rob:  My pleasure. Thanks for having me. 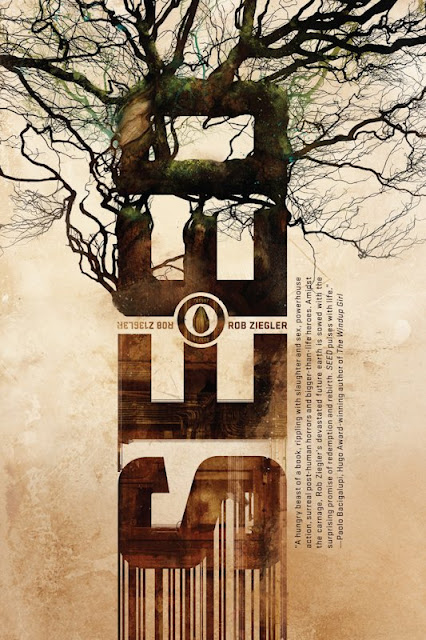 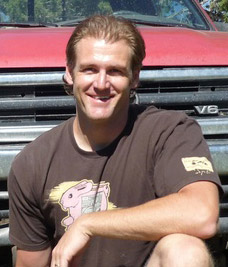 Rob lives with his wife in western Colorado. He writes speculative fiction. Seed is his debut novel.

What:  One commenter will win a copy of Seed generously provided by Night Shade Books.

Which post-apocalyptic or dystopian novel would you recommend?
Please remember - if you don't answer the question your entry will not be counted.

Who and When:  The contest is open to all humans on the planet earth with a mailing address. Contest ends at 11:59pm US Eastern Time on Thursday, November 24, 2011. Void where prohibited by law. No purchase necessary. You must be 18 years old or older to enter.

27 Comments on The Qwillery: Interview with Rob Ziegler and Giveaway - November 17, 2011