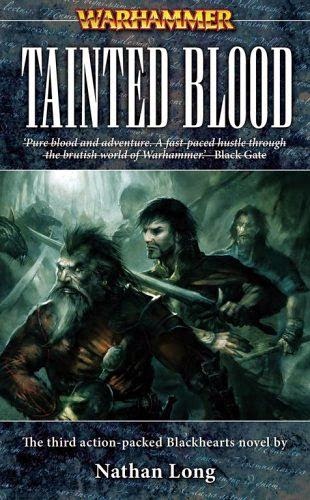 Nathan Long started writing at the age of 12 and spent several years writing screenplays for TV and films. He's written 15 novels in the Warhammer shared world so far, and Valnir's Bane was his first book published in 2004. His first original world book is Jane Carver of Waar, a parody/ode to Edgar Rice Burroughs. He's also written a few video games.

The Black Hearts series is a reflection of Long's love of the old classic film heroes, everyday men who went through incredible events, and, just as often as they were heroic, they also showed their fear or weaknesses.

Still shocked by the death of their comrade Abel, Reiner and his cut-throat companions, the Blackhearts, are horrified to learn that there may be a spy amongst them. Imprisoned and forced into dangerous missions under threat of death, they are press ganged into working as bodyguards for their "employer", Count Manfred, as he journeys to Talabheim, where the forces of magic are running wild. With enemies all around and a traitor within, can the Blackhearts solve the mystery and save the city from destruction?

I'm sad to see this series come to an end. I found it by mistake and count myself lucky. Tainted Blood the last book in The Black Hearts series takes you out with a bang.

Tainted Blood starts out with the Black Hearts at their worst with a traitor among them. Who it is and how not knowing the identity of the traitor worms its way into all the Black Hearts and nearly destroys them. I enjoyed the intrigue and guessing and was honestly surprised with the reveal. Long continues to shine with his characters, we see several continue to grow and meet new ones along the way. It amazes me that he has been able to kill off so many members of the Black Hearts and add more with each book. So many authors are unable to find the right balance in killing their darlings, but Long is one of the few that does it right.

The main storyline is a lot of fun as the Black Hearts are once again forced into service and find an impossible path out trouble. Long continues to raise the stakes without turning the whole thing into a gross misuse of the fantasy genre. I love it when an author brings things back from past books without making corny mistakes. It gives the series as a whole a united feel and also helps bring the story to a satisfying ending.

My only complaint with the book or the series as a whole is that it's over. I wish I had another book to read of the Black Hearts. Thankfully, I bought the omnibus, so I have a couple of short stories to enjoy. Nathan Long is now an author I will be keeping my eyes on for future releases. I hope he continues to write in the sword and sorcery genre that he does so well. I'd also love to see him write in his own world. I think he could bring us something new an interesting in world building.

Tainted Blood is sadly the final book is the series, but I'm happy with how it ended, which is more important than how it all began, because now it'll be a series I'll reread for years to come—a testament to Long's skill and the characters he created. There are a few minor moments of descriptive violence and implied sexual activities, but I have no problem recommending this book to teens or adults. It's a go-to series for me to recommend to anyone who enjoys cheering on reluctant heroes without having to be disgusted by them. It's got it all folks. Go buy all three books or get your hands on the omnibus. You'll thank me later.
Source: qwillery.blogspot.com
+ Sharelabels (7)Flag
AllBlack HeartsBook ReviewsBranniganNathan LongRetro ReviewsTainted Bloodreview