Interview with Patrick S. Tomlinson, author of The Ark

Interview with Patrick S. Tomlinson, author of The Ark

Published:
Please welcome Patrick S. Tomlinson to The Qwillery as part of the 2015 Debut Author Challenge Interviews. The Ark was published on November 3rd by Angry Robot Books. 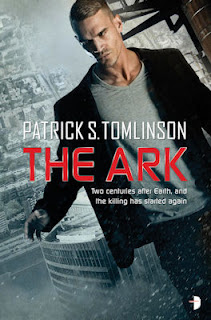 Patrick:  I wish to say upfront that I’m only answering these questions because unnamed persons at The Qwillery are holding my dachshund hostage. I started writing in 2009 when I was horrified to discover just how much time each day I was spending not being rich and famous.

Patrick:  We really need another word for a writer who doesn’t use an outline. “Pantser” sounds just a little too indecent exposure-y. Anyway, I started out writing on instinct, but as I’ve come along, an outline has become an increasingly important tool for me. A good outline gives me direction, lets me spot problems in the plot before they force a big rewrite, and drastically increases my daily word count. But at the same time, I’m not a slave to them. Typically, my outlines run about ten chapters ahead of wherever I’m at in the WIP at any given time. Fewer than that and I pause to push it out a few more chapters to keep the story on course. THE ARK is the first book I wrote this way, and I finished the rough draft in six months, which was months faster than the other two novel length works I’d completed previously.

Patrick:  Watching the success of my friends and colleagues. Gods, how I loathe them.

Patrick:  It’s a long list. Douglas Adams is why I started writing. My first novel began life as Hitchhiker’s Guide fanfic, because I was so upset over how the last book ended that I sat down to write a sixth. That one has since been massively rewritten and is now in the hands of my agent. Additionally, the satirical brilliance of Terry Pratchett has provided a nice warm little home for my sense of humor for many years. I can’t stop reading David Weber’s Honorverse books for military sci-fi. I think that Walter John Williams’ Praxis trilogy is the best space opera written in the last twenty years, with apologies to Ann Leckie’s excellent Ancillary cycle. Ramez Naam’s Nexus trilogy has been hugely impactful on the way I think about near-term futurism. I’m also a big fan of John Scalzi’s breezy character building and his plot pacing. I eat those books up.

TQ:  Describe The Ark in 140 characters or less.

Patrick:  THE ARK is a murder mystery set on a generation ship one month from reaching its destination. A “Sealed Airlock” thriller, to coin a phrase.

TQ:  Tell us something about The Ark that is not found in the book description.

Patrick:  The people living onboard are part of the most invasive and controlling surveillance state ever conceived. Their every movement is logged and tracked. Everything they consume and recycle is relentlessly monitored. Yet inside the modules, they are self-governing. The surveillance state exists with their full knowledge and consent, and is generally viewed as critical for both survival and basic fairness. Which, in a very real sense inside the delicate balance of an artificial environment, it is.

TQ:  What inspired you to write The Ark?  What appeals to you about writing Science Fiction?

Patrick:  I’ve always been fascinated by the idea and the promise of generation ships. Realistically, if we’re going to send actual meat-bag humans to other star systems, generation ships are how we’ll do it. I was watching a show on Discovery channel, (I’m pretty sure) about all the hurdles to building one. But then I started thinking about what could motivate mankind to actually do it. Then what happens during the trip to change the nature of the society aboard. Then what happened on the other side. A story emerged quickly after that. Then I started making doodles of what the ship would look like and it was all over.

Science Fiction holds a special appeal for me because it requires so many different disciplines of story-telling. Not only do you have to create believable characters, but the entire world and society that they inhabit. And unlike pure fantasy, it has to have a level of internal consistency and scientific plausibility, which requires a whole other base of knowledge. Writing sci-fi forces us to walk on this weird tightrope of imaginative freedom and scientific constrictions. It’s fun finding the balance and trying to do it with narrative flare.

TQ:  What sort of research did you do for The Ark?

Patrick:  All kinds. From a plausible propulsion system based on existing technology, to acreage requirements for food production, to a safe number of people to ensure genetic diversity. The size and design of the Ark itself was entirely driven by the scientific requirements of moving fifty-thousand people twelve lightyears. The story and characters were then placed inside that artificial environment and allowed to develop organically.

Patrick:  There’s one character in particular, the museum curator, Devorah Feynman. She’s this tiny old lady, but is an absolute holy terror with a one-track mind and a sharp wit. I loved writing her. She’s just the star of every scene she’s in.

The hardest was definitely the main character’s love interest, Theresa Alexopoulos. I had real trouble trying to balance her role as Bryan Benson’s secret girlfriend and subordinate, while making her the strong and independent character I’d envisioned her to be. However, she’s promoted to a POV character in the next book in the series, TRIDENT’S FORGE, and I feel like she gets the attention and development there she deserves.

TQ:  Which question about The Ark do you wish someone would ask? Ask it and answer it!

Q) Could we really make a giant starship that moves by pooping out atomic bombs?

A) Yes! We really could! Indeed, the idea has existed since the 1950’s. A variety of different organizations pursued the technology under the label Project Orion, including the U.S. Air Force, NASA, and even the British. We even built a technology demonstrator that used conventional explosives. You can find the clip on YouTube. We only abandoned the concept as a result of the Nuclear Test Ban Treaty, which was some hippie crap about not detonating thermonuclear weapons in the atmosphere. Boo, hippies, boooooo!

Indeed, the reason the Ark was designed as a Project Orion ship is because it’s the only proposal to facilitate interstellar travel we have that could realistically be scaled up with existing or near term technology. Since the disaster that convinces humankind to build the ship is discovered less than a hundred years from now, I didn’t want it using some far-future tech like an Alcubierre drive that might be possible someday. I wanted something that, if our backs were against the wall, we could start building today. And we have all these nukes lying around not doing anything…

TQ:  Give us one or two of your favorite non-spoilery lines/paragraph from The Ark.

Patrick:  Well, next up immediately is another round of rewrites for the second book in the series, TRIDENT’S FORGE. It’s a very different book from THE ARK, less murder mystery and more action- adventure with some frontier survival thrown in for good measure. I’m already happy with it, but there are some spots that need to be fleshed out so readers have an easier time accessing what was in my head while it was being written.

But after that, the real fun starts. In addition to writing sci-fi full time, I’m also busy developing my career as a stand-up comedian. The very first novel I wrote, which I mentioned earlier, was a sci-fi comedy in the tradition of Adams and Pratchett. I’ve just finished rewriting it after four years away and have submitted it to my agent. If that thing gets the green light, look out. I’ve got synopses ready for the next five books in that series.

Patrick:  Whatever. I did your damned interview. Now give me back my dog, you monsters.

Note from unnamed persons at The Qwillery: No dog or author was harmed in the making of this interview though it was touch and go about the author for a while. 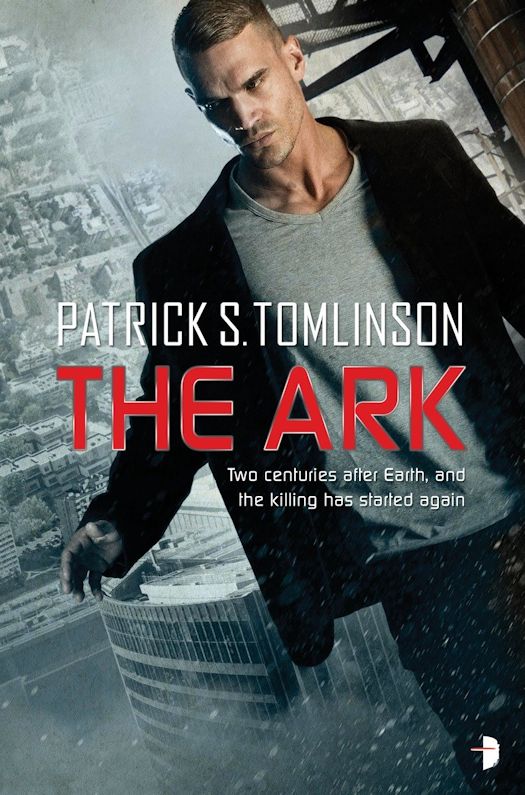 Humankind has escaped a dying Earth and set out to find a new home among the stars aboard an immense generation spaceship, affectionately named the Ark. Bryan Benson is the Ark’s greatest living sports hero, enjoying retirement working as a detective in Avalon, his home module. The hours are good, the work is easy, and the perks can’t be beat.

But when a crew member goes missing, Benson is thrust into the centre of an ever-expanding web of deception, secrets, and violence that overturns everything he knows about living on the Ark and threatens everyone aboard. As the last remnants of humanity hurtle towards their salvation, Benson finds himself in a desperate race to unravel the conspiracy before a madman turns mankind’s home into its tomb.

File Under: Science Fiction [ Last Gun in the Universe / We’re Not Alone / Poison and Nukes / Race to the End ] 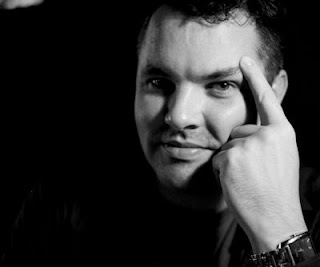 Patrick S. Tomlinson is the son of an ex-hippie psychologist and an ex-cowboy electrician. He lives in Milwaukee, Wisconsin with a menagerie of houseplants in varying levels of health, a Ford Mustang, and a Triumph motorcycle bought specifically to embarrass and infuriate Harley riders.


When not writing sci-fi and fantasy novels and short stories, Patrick is busy developing his other passion for performing stand-up comedy.

Report "Interview with Patrick S. Tomlinson, author of The Ark"