Published:
I am a tremendous fan of kaiju eiga (Japanese monster films). While there are many kaiju (strange beasts or monsters), even nonfans will recognize Gojira. Gojira is Godzilla. 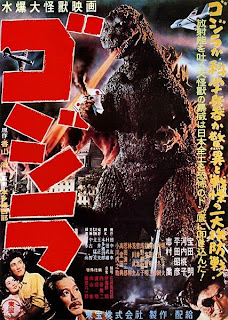 The film Gojira was originally released in Japan in 1954 and won a Japanese academy award for special effects. The film is clearly an Atom Age film. Gojira was created by a nuclear radiation. The film deals with the fallout of nuclear weaponry in the form of a giant monster. Many scenes were cut from the US version of the film, most of them dealing with the perils of atom bomb. Raymond Burr was (badly) added to the cut up version of the film with approximately 40 minutes of the original removed. While I enjoy his acting as Perry Mason, his character adds nothing to this film Fortunately the original version is available. This is the version that I recommend.  It has a much different feel than the American version, which is campy and choppy.  The original Gojira is really a somber film that warns about the perils of nuclear testing and the unbridled use of dangerous weapons. It alludes, of course, to Hiroshima and Nagasaki, but also to the fallout caused by an American nuclear test in the Pacific that resulted in radiation poisoning of the crew of a Japanese fishing boat, Fukuryu Maru (Lucky Dragon). In any event, the orginal film is simply a better film. If you have the chance you should watch it.

The Japanese Trailer for Gojira (1954)


The United States Trailer for Godzilla, King of the Monsters(1956)

A really nice montage to part of the iconic Gojira theme written by Akira Ifukube :