Blake:  If a passage is really giving me trouble, I will get up brush my teeth and then come back and try it again. Strangely, it often works.

Blake:  More plotter than pantser. For a ~130,000 word novel, I compose a ~15,000 word outline. I start writing, trying to stick to my outline but always going with what I feel is best working for my characters and story. When I’ve wondered off of my outline, I stop and rewrite the outline before venturing forth again.

TQ:  What inspired you to write The Spellwright Trilogy?

Blake:  Severe dyslexia kept me from reading fluently until I was 13 years old, when I discovered fantasy literature. I began sneaking paperbacks into special ed study hall and reading them under my desk. Fantasy literature changed my life; it inspired me to learn to read and write. My goal was to one day write something as inspiring as those novels. I worked hard as I could, catching up to the non-disabled kids. After college I attended Yale University. While there, in one particularly dull lecture the central idea of the trilogy came to me. I’ve written up a narrative of the inspiration and posted a few pictures of how Yale’s architecture inspired the setting of Starhaven.

TQ:  What sort of research did you do to create the world in The Spellwright Trilogy?

Blake:  Very little, surprisingly. The trilogy is built from a mixture of classic epic fantasy, linguistics, medical science, and personal struggles with disability—all of which my life’s course made me intimately acquainted with. However, each book did present specific questions I had to do some background reading to answer. For Spellbound, I had to find out how soon after an emergency craniotomy one could safely have sex. The answer may surprise you.

TQ:  Please briefly describe the system of magic in The Spellwright Trilogy world.

Blake:  So…imagine a world in which you could peel written words off a page and make them physically real. You might pick your teeth with a sentence fragment, protect yourself with defensive paragraphs, or thrust a sharply-worded sentence at an enemy’s throat. This is the world of the Spellwright Trilogy. In the first book, Spellwright, we meet Nicodemus Weal, an apprentice at the wizardly academy of Starhaven. Because of how fast he can forge the magical runes that create spells, Nicodemus was thought to be the Halcyon, a powerful spellwright prophesied to prevent an event called the War of Disjunction, which would destroy all human language.

There was only one problem: Nicodemus couldn’t spell.

Runes must be placed in the correct order to create a spell. Deviation results in a “misspell”—a flawed text that behaves in an erratic, sometimes lethal, manner. And Nicodemus has a disability, called cacography, that causes him to misspell texts simply by touching them. Now twenty-five, Nicodemus lives in the aftermath of failing to fulfill prophecy. He finds solace only in reading knightly romances and in the teachings of Magister Shannon, an old blind wizard who’s left academic politics to care for Starhaven’s disabled students. But when a powerful wizard is murdered with a misspell, Shannon and Nicodemus become the primary suspects. Proving their innocence becomes harder when the murderer begins killing male cacographers one by one…and all evidence suggests that Nicodemus will be next. Hunted by both investigators and a hidden killer, Shannon and Nicodemus race to discover the truth about the murders, the nature of magic, and themselves.

Blake:  Francesca DeVega is a healer in the city of Avel, composing magical sentences that close wounds and disspell curses, but her life is thrown into chaos when a newly dead patient sits up and tells her that she must flee the infirmary or face a fate worse than death. Now Francesca is in the middle of a game she doesn’t understand—one that ties her to the notorious rogue wizard Nicodemus Weal and brings her face-to-face with demons, demigods, and a man she hoped never to see again.

TQ:  Without giving anything away, what is/are your favorite scene(s) in Spellbound?

TQ:  In Spellbound, who was the most difficult character to write and why? The easiest and why?

Blake:  I found all of my major protagonists and antagonists very easy to write. Francesca being the easiest because I had so much fun dreaming up way she could be snarky. The most difficult character to write for both books has been Deirdre. Much of her life occurs before the books begin. Further complicating matters, there’s a great deal about why Deirdre makes the decisions she does that no one knows. She is herself ignorant about major forces shaping her life; however, through her actions, she causes much of the story to develop. Balancing how much she should know with how much the reader might surmise about her was a difficult game.

TQ:  Spellbreaker is the title of the 3rd book in the Trilogy. Will the series continue beyond a trilogy? Will there be any novellas?

Blake:  As of right now, I have no plans for more Spellwright books; however, I’m not against the possibility. My situation is complicated a bit by medical training—after I turn in book three I will start my residency, which will keep me very _very_ busy for about three years. I simply can’t produce a ~130,000 novel during that time.

TQ:  The Spellwright Trilogy is Fantasy. Are there any other genres in which you would like to write in addition to Fantasy?

Blake:  I am fascinated by authors of multiple dimensions and so try to make my career as weird diverse as possible. I have already published a hard science fiction novelette (Text Audio), a website on the medical physical exam (cited by the New York Times), and a few articles in academic medical journals.

Blake:  Right now I’m trying to focus on finishing the trilogy; however, like many authors, I have several possible projects cooking: a Magic Realism / New Weird novel inspired by the time I spent in special ed and by my experiences taking care of disabled children in the hospital; a humorous novel about the foibles of the American medical system (and they are legion); a Tim Powers-ish secret history novel about Thomas Lodge, a playwright who competed with Shakespeare but then became a physician. These are the things I daydream about when studying for exams, recovering from an overnight call, or cranking away at book three. I’m not sure which one will rise to the front…or how I’m going to survive residency, for that matter…but it will be interesting to see how all the pieces come together.

Blake:  My pleasure. Thank you kindly for having me.


About The Spellwright Trilogy 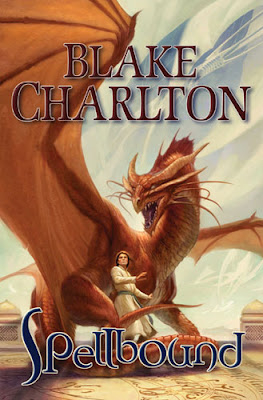 In a world where one’s magical prowess is determined by one’s skill with words and ability to spell, Nicodemus is a wizardly apprentice afflicted by a curse that causes him to misspell magical texts. Now, the demon who cursed him has hatched a conspiracy to force Nicodemus to change language and ultimately use it to destroy all human life. As Nico tries to thwart the demon’s plan, he faces challenges from all sides. But his biggest challenge is his own disability, which causes him to create chaos wherever he goes. And the chaos surrounding Nico is affecting the world so profoundly that the kingdom to which he has fled to gather strength is on the brink of civil war, and he suspects that his closest allies—even Francesca, whom he loves more than life itself—may be subject to the demon’s vast powers. As Nico tries to forestall the apocalypse, he realizes that he doesn’t know if he can fully trust anyone, not even the woman he loves. And if he makes one wrong move, not only will his life be forfeit, he may end up destroying all mortal life as well.

Introducing new twists to the unique magical system of Spellwright, and exploring issues that will bring readers a deeper appreciation of a fascinating world, Spellbound is sure to please Blake Charlton's fans and increase their number. 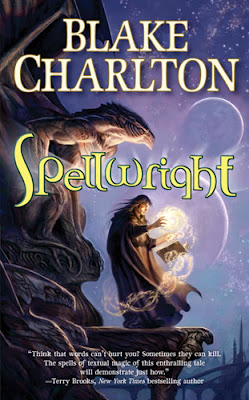 Nicodemus is a young, gifted wizard with a problem. Magic in his world requires the caster to create spells by writing out the text . . . but he has always been dyslexic, and thus has trouble casting even the simplest of spells. And his misspells could prove dangerous, even deadly, should he make a mistake in an important incantation.

Yet he has always felt that he is destined to be something more than a failed wizard. When a powerful, ancient evil begins a campaign of murder and disruption, Nicodemus starts to have disturbing dreams that lead him to believe that his misspelling could be the result of a curse. But before he can discover the truth about himself, he is attacked by an evil which has already claimed the lives of fellow wizards and has cast suspicion on his mentor. He must flee for his own life if he’s to find the true villain.

But more is at stake than his abilities. For the evil that has awakened is a power so dread and vast that if unleashed it will destroy Nicodemus... and the world. 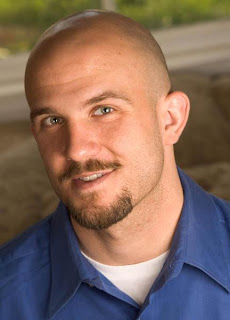 Blake Charlton’s severe dyslexia kept him from reading fluently until he began sneaking fantasy novels into special-ed study hall in the seventh grade. He has been an English teacher, a biomedical technical writer, a learning- disability tutor, and a junior varsity football coach. He currently attends Stanford University School of Medicine. Spellbound, the sequel to Spellwright, is his second novel and the second book in the Spellwright Trilogy. You can visit him at blakecharlton.com.

What:  Blake is giving away 2 signed copies of the Mass Market Paperback of Spellwright (US mailing addresses only). Two commenters will each win 1 book.

Fantasy, Urban Fantasy, Epic Fantasy or all three?
Please remember - if you don't answer the question your entry will not be counted.

Who and When: The contest is open to all humans on the planet earth with a United States of America mailing address. Contest ends at 11:59pm US Eastern Time on Thursday, September 29, 2011. Void where prohibited by law. You must be 18 years old or older to enter.

22 Comments on The Qwillery: Interview with Blake Charlton and Giveaway - September 22, 2011