Published:
Please welcome Nancy Northcott to The Qwillery as part of the 2012 Debut Author Challenge Guest Blogs. Renegade (The Protectors 1) was published on November 6th (eBook) and was published on December 18th in Trade Paperback. Read an interview with Nancy here. 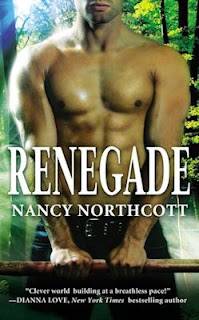 Anticipation
Sally, thank you for having me here today!

Reading often fills me with anticipation. As I turn the pages, I look forward to the triumph of the good characters and the happy conclusion to any romantic arc in the book. I expect serious problems, even danger and disaster, along the way, but I figure the ending will leave me satisfied.

As I writer, I try to deliver what I like to read. This means anticipating what readers might want. Renegade, my debut novel is labeled paranormal romance. I think of it as a combination of dark fantasy and romantic suspense, a label that won’t fit a vendor’s marketing niche. To make it satisfying to readers, I had to look at the components of those genres.

First, I needed characters who had appealing goals but would not be natural allies. A sheriff and a fugitive wouldn’t join forces immediately. They might eventually, though, if the fugitive is wrongly accused. So Renegade is about the mages’ shire reeve, or sheriff, Valeria Banning, and the mage world’s most wanted criminal, former shire reeve Griffin Dare. Trying to clear his name and unmask the real threat force them into dangerous situations that also draw them closer to each other.

I also needed a world and a magic system with rules and consistency. For those, I drew on Wicca, New Age concepts, and folklore. My mages’ power is nature-based, and they can draw only so much of it at any time, or they can burn themselves out with an overload. I set that limit because I felt it was more realistic and more challenging. Unless the characters face significant, believable challenges, the plot has no conflict. It’s the Superman problem of finding an adversary who poses a real threat.

I wanted a place with abundant life energy for my mages to draw. Based on vague childhood memory, I chose the Okefenokee Swamp. It’s actually a peat bog, not a swamp, so it doesn’t smell and isn’t muddy, but its 700 or so square miles in southeast Georgia teem with various forms of wildlife.

Every genre novel hero or heroine needs an adversary, and my mages have the ghouls. Corrupted by dark magic, they can’t breed among themselves, so they kidnap mages or Mundanes (normal humans) for that purpose. They also have talons that extend from beneath their fingernails to drain magical energy or inject potentially lethal venom into their prey. Unable to digest anything not freshly killed, they keep animals for that purpose. They also engage in chaos magic, which not only violates the natural order but feeds on terror, pain, and the ritual sacrifices of souls.

I read pretty much every type of genre fiction as well as a range of nonfiction. I can enjoy a novel that doesn’t have a romantic arc, but I prefer those that do. Renegade is basically a romantic suspense novel set in a contemporary fantasy world, so the romance has to be the primary story arc to deliver what romantic suspense readers most anticipate. Griff’s and Val’s battles against ghouls and mage intrigue provide the provide the danger and suspense elements and fuel the romantic conflict.

I always enjoy reading, but now anticipation, for me, is also about building the mages’ world, driving them toward a final confrontation with their greatest foes. I’m enjoying the process and hope readers will enjoy the end result.

Thanks again for having me, Sally. I’d like to wish all your readers a happy holiday season and a wonderful 2013! 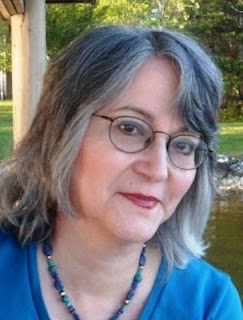 Nancy Northcott’s childhood ambition was to grow up and become Wonder Woman. Around fourth grade, she realized it was too late to acquire Amazon genes, but she still loved comic books, science fiction, fantasy and YA romance. A sucker for fast action and wrenching emotion, Nancy combines the romance and high stakes she loves in her new contemporary mage series.

Married since 1987, she considers herself lucky to have found a man doesn’t mind carrying home a suitcase full of research books. Nancy and her husband have one son, a bossy dog, and a house full of books.