Kasey:  Hmm, I’m not sure how interesting it is, but I often write longhand in notebooks with teal or turquoise pens whenever I get stuck. For some reason, that always helps me get past whatever mental block I have going on. The fact the pens have to be teal or turquoise would be the “quirky” part and is probably a result of my OCD.

Kasey:  Most definitely more of a pantser.

TQ:  What inspired you to write the Shades of Fury series?

Kasey:  As much as I love good vampire and werewolf stories, I wanted to write about a lesser-used supernatural creature. I’ve always been fascinated by mythology of all types, especially Greek and Roman, so it only seemed natural to turn to those myths to find inspiration. I actually struck upon the idea of writing about Furies for an online query-writing contest. I sat down and whipped out a pretty cool query for a story I hadn’t yet written—the kicker is that it wasn’t for Marissa’s story, but rather, Cori’s. I actually got to the second or third round in that contest, and had to write the first chapter for the second round, but I found my interest kept wandering from Cori and her story to her Aunt, Riss, and the story that happened chronologically before—the story of how Riss tracked down the person responsible for abducting Cori’s other aunt, Vanessa. I’m so glad I listened to my muse because that is obviously the story that won over my agent and editor. Cori’s story is still kicking around in the back of my brain and I definitely plan to write it down someday.

TQ:  Why did you set the series in Boston?

Kasey:  One can write stories set in the same setting so many times before one goes slightly batty. At least, that’s been my experience. While I was born and raised in St. Louis and am back in that area now, I lived and worked in Boston for a year in my early 20’s. At the time I sat down to write Red Hot Fury, Boston hadn’t been used in many urban fantasies and it seemed to me like the perfect setting for mine. Boston is an awesome city and will always hold a special place in my heart. In fact, I make it a point to get back there whenever I can.

TQ:  What sort of research did you do to create the world in the Shades of Fury series?

Kasey:  I refreshed my memory on several Greek and Roman myths, especially those dealing with Furies, Harpies, Nike, Nemesis, and Orpheus (just to name a few). I have researched other cultures and mythologies as well, including Ancient Egypt, Celtic myths, Norse myths, Hindu culture, African history, culture, and religion, and too many others for me to think of off the top of my head. I’ve done more mundane forms of research like refreshing my memory on Boston neighborhoods and the MBTA (subway/commuter rail line in Boston), learning how the Boston Police Department operates in general, deciding which type of gun seemed a good fit for Riss to carry, and figuring out which cars suited certain characters’ personalities. This is by no means an exhaustive list, of course.

Kasey:  140 characters? You’re killing me here! Haha, okay, how about, “Modern-day Fury Riss Holloway goes undercover to stop a serial killer before the killer’s green-eyed gaze turns to her lover, Scott Murphy.” Woo, did it!

TQ:  Without giving anything away, what is/are your favorite scene(s) in Green-Eyed Envy?

Kasey:  I have a couple favorite scenes in Green-Eyed Envy. One is when we see just how much like her aunt Riss Cori Holloway can be. Another is when Riss finally figures out for sure who the killer is, and proceeds to go all Fury on that person.

TQ:  In Green-Eyed Envy, who was the most difficult character to write and why? The easiest and why?

Kasey:  I’ll reverse the order because Riss is far and away the easiest character for me to write because she has such a strong and distinctive voice. Love her or hate her, she definitely doesn’t just fade into the background. I also have to say that none of the characters are particularly difficult for me to write—I even enjoy writing about the villains because I try to make them fully-fleshed characters in their own right. Now, specific scenes can be extremely hard for me to write, but not usually particular characters.

TQ:  Who should play Marissa ‘Riss’ Holloway if the books become movies?

Kasey:  In mortal form, I always envisioned Riss as a taller, curvier version of Kristin Bell. Her face and honey blonde hair are spot on.

TQ:  Is there a playlist for Green-Eyed Envy and what is it?

Kasey:  I always listen to music when writing but have very eclectic musical tastes and rarely make up a specific playlist for any particular book. I listen to everything from country music to Celtic music to rock, alternative rock, pop, dance music, R&B, movie soundtracks, and some hip hop.

TQ:  How many books are planned for the Shades of Fury series?

Kasey:  I don’t have a specific number in mind. So far the publisher has contracted for three books but I hope they buy more. I try to keep each book a self-contained standalone that has overarching themes that can be continued on from book to book. Eventually, I would love to do tie-in novels such as a YA telling Cori’s story and novels from Trinity’s or Harper’s POV. I really love what Jeaniene Frost is doing with her Cat and Bones series tied in to the standalones telling the stories of other characters in her world. I also love how Kelley Armstrong’s stories are set in the same world but tell the stories of many of the characters, and how we often get to circle back around to the POVs of favorite characters we haven’t heard from in awhile.

Kasey:  My agent is currently shopping a YA urban fantasy featuring djinn (genies) and I have a few other projects in various stages of completion, ranging from urban fantasy to post-apocalyptic YA and steampunk. 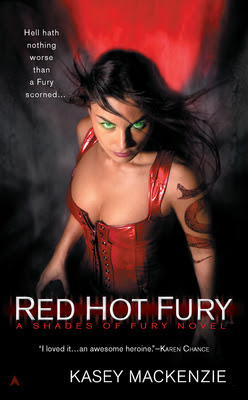 Introducing a sizzling new urban fantasy series featuring Marissa Holloway, an immortal Fury who doesn't just get mad...she gets even.

As a Fury, Marissa Holloway belongs to an Arcane race that has avenged wrongdoing since time immemorial. As Boston's chief magical investigator for the past five years, she's doing what she was born to do: solve supernatural crimes.

But Riss's investigation into a dead sister Fury leads to her being inexplicably suspended from her job. And to uncover the truth behind this cover-up, she'll have to turn to her shape-shifting Warhound ex for help. 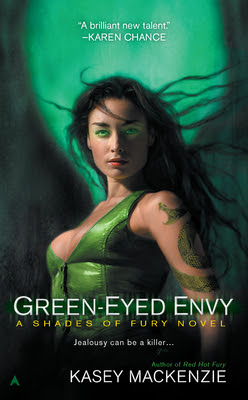 When the bodies of cat shape-shifters start piling up in Boston's magical underbelly, Chief Magical Investigator Marissa Holloway finds one common thread that ties the victims together: all were old flames of FBI Agent Harper Cruz. And since Marissa's lover Scott Murphey once enjoyed a one-night stand with Harper, the Fury has twice the incentive to crack the case wide open before the killer's green-eyed gaze turns in Scott's direction. 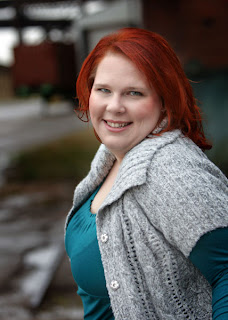 Kasey Mackenzie is the author of the Shades of Fury urban fantasy series from Ace Books. Red Hot Fury debuted last year and Green-Eyed Envy releases on June 28, 2011. Kasey lives with her husband and son in St. Louis, Missouri; home of the Gateway Arch, the baseball Cardinals, and the world’s greatest thin-crust pizza. Kasey was one of those students who always had her nose in a book—so no big surprise when she was voted “Teacher’s Pet” in her high school yearbook. Today, she is a voracious reader of fantasy, romance, suspense, and “soft” science fiction.

What:   One commenter will win signed copies of Red Hot Fury (Shades of Fury 1) and Green-Eyed Envy (Shades of Fury 2) from Kasey. Please note the giveaway is limited to mailing addresses in North America (US/Canada).

Who or what is your favorite 'person' or creature from Greek mythology?
Please remember - if you don't answer the question your entry will not be counted.

Who and When:  The contest is open to all humans with a North American (US/Canada) mailing address. Contest ends at 11:59pm US Eastern Time on Friday, July 8, 2011. Void where prohibited by law.

24 Comments on The Qwillery: Interview with Kasey Mackenzie & Giveaway - July 1, 2011