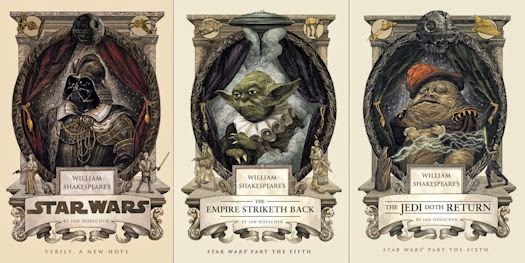 William Shakespeare’s Star Wars Trilogy: The Royal Imperial Boxed Set by Ian Doescher is my top choice for humor. The gorgeous set, which was released this October, includes Verily a New Hope,  The Empire Striketh Back, and The Jedi Doth Return. This series delivers laughs along with a few tugs on your heartstrings. Who would have thought iambic pentameter combined with Star Wars would be the books you’re looking for? (See TrintyTwo's reviews of the Star Wars Trilogy here.)

My favorite sci fi for 2014 is The Enceladus Crisis by Michael J. Martinez. Why is it a standout? It’s smart and exciting with the added bonus that Martinez created characters I care about. I really enjoyed its unique historical fiction meets sci fi element. (See TrinityTwo's review of The Enceladus Crisis here.)

I’d like to give honorable mentions to three more books that I really enjoyed this year: White Heart of Justice by Jill Archer (review), Night Owls by Lauren M. Roy (review) and Phoenix Island by John Dixon (review) . I think I am bending Sally’s rules a bit but I read a lot of really good books. If you haven’t done so already, get out there and buy a book! You deserve it.