The Qwillery | category: A Company of Angels

Published:
The Qwillery is delighted to announce that Stephanie Chong has joined the 2011 Debut Author Challenge. Stephanie's debut novel, When Demons Fear to Tread (A Company of Angels 1), will be published in late August in by Harlequin's MIRA Books. 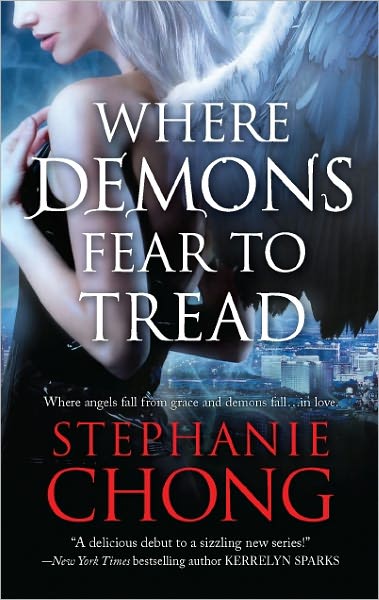 Where angels fall from grace and demons fall…in love.

The arch demon’s voice was low and deep. His fingers caressed her through the fabric of her dress. “Your soul—or his, Serena. Choose.”

Fledging guardian angel and yoga teacher Serena St. Clair dares to enter Devil’s Paradise nightclub on a mission—to retrieve the wayward Hollywood “It Boy” she’s assigned to protect. But she’s ambushed by the club’s owner, arch demon Julian Ascher. The most powerful demonic entity in Los Angeles, Julian is handsome as sin, a master of temptation who loves nothing more than corrupting pleasure-seeking humans. He won’t release the lost soul Serena is supposed to guard. Unless she accepts his dangerous wager.…

After the disastrous way his human life ended, Julian vowed that no woman would get the better of him again.
Yet this sexy-sweet angel, smelling of fresh ocean air and happiness, triggers centuries-old feelings. Now, their high-stakes game of seduction, where angels fall from grace and where demons fear to tread, will lead them either to an eternity in hell…or a deliciously hot heaven.