The Qwillery | category: Alien vs Alien 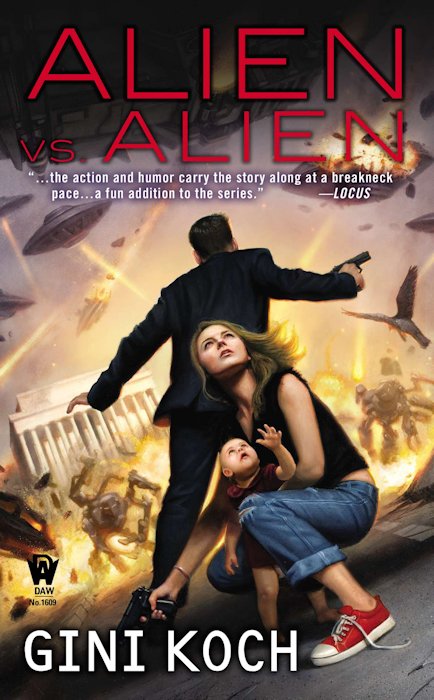 Jeff and Kitty Katt-Martini and the rest of the American Centaurion Diplomatic Corps are still recovering from their introduction to Washington D.C. politics, parties, and conspiracies. So when compromising pictures arrive, no one’s too surprised. They’re also the least of anyone’s worries. Evil androids running amok, birds of all kinds and from all places creating havoc, a Senator trapped in an ever-tightening web of intrigue, and escalating international tensions all seem tough but manageable. But the disappearance of Jeff Martini and Charles Reynolds during the International One World Festival signals more than the usual nastiness—and it looks like even ACE can’t help them. Then new trouble arrives in old packages and even with the best hackers in the world, beings from near and far, the full might of Earth’s military, and the Wonder Twins on their side, Centaurion Division’s outmanned and outgunned. Now Kitty’s racing against the clock to find not only Jeff and Chuckie, but to keep the peace between Middle Eastern countries, all while searching for the bases of super-soldier operations—to stop them or die trying.

The Alien (or Katherine "Kitty" Katt) series is one of those series that gets better and better with each novel. This is in part due to the fact Ms. Koch keeps the main characters fresh (personal growth, expanding powers, etc.) and always provides an entertaining and intricate plot. In addition, there is a wonderful ensemble of returning and new characters in each novel. On top of this, there is a humor ... in between things blowing up, people being kidnapped, and alien and domestic threats being handled.

Once again Kitty is thrust into the middle of a crisis. Kitty uses both her prodigious brains and her impressive array of abilities to protect those she loves and try to get to the root of the problems they are facing. I adore Kitty. She's intelligent, clever, funny, and can kick butt when necessary. She also loves her husband and daughter, her close friends/family in the  American Centaurion (A-C) community as well as her parents. While many of her talents are "unreal" her personality is thoroughly believable. Kitty really shines in this novel.  She also has excellent taste in music.

Many of the returning characters in the series are as terrific as Kitty, which only adds to the fun of reading Alien vs. Alien. This ensemble of characters is very strong. I love finding out new things about them and Ms. Koch never disappoints.

I am always surprised by Ms. Koch's inventiveness.  Alien vs. Alien has an intricate conspiracy and some very complex and twisted bad guys. The bad guys have excellent (if thoroughly despicable) motivations for their evil-doings.  They are not cardboard cutout bad guys.

Alien vs. Alien is quite simply a wonderful novel from the pitch perfect pacing to the lovable characters to the out of this world conspiracy.  The Alien series is firmly on my keeper shelf and I can't wait for the upcoming Alien in the House.


Alien vs. Alien may be read as a standalone, but you'd be missing out if you didn't read the other books in the series.

Prior books in the series: 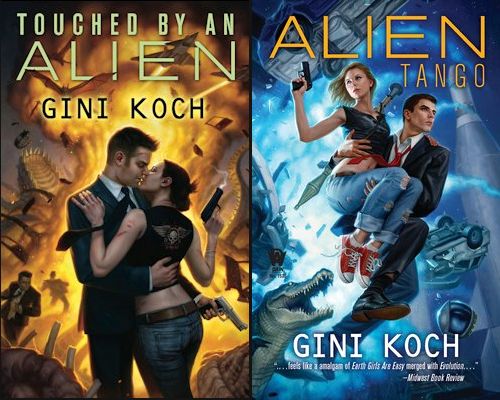 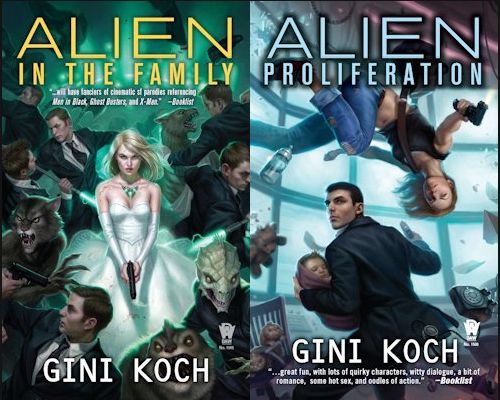 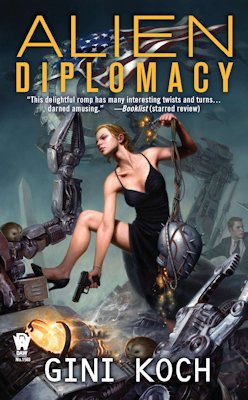 What:  One commenter will win Mass Market Paperback copies of Touched by an Alien (Alien 1), Alien Tango (Alien 2) and Alien in the Family (Alien 3) from The Qwillery. The novels have been signed by Gini Koch and Dan Dos Santos (the cover artist).

Who and When:  The contest is open to all humans on the planet earth with a mailing address. Contest ends at 11:59pm US Eastern Time on Tuesday, December 23, 2012. Void where prohibited by law. No purchase necessary. You must be 18 years old or older to enter.