Published:
Please welcome Duncan McGeary to The Qwillery. Tuskers II: Day of the Long Pig was published on May 25th by Angelic Knight Press, an imprint of Ragnarok Publications. 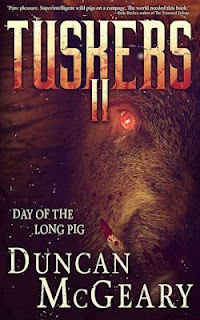 Horror… Happily.
Duncan McGeary
I was surprised that when I came back to writing, I chose to write horror. Even more, that I continued to write horror. Happily.
It seems to me that horror is an open genre. There are no required formulas to the horror, as least as far as I can tell. Anything can be turned into horror -- any subject, any setting, any format; any other genre or no genre at all. The only expectation is that it has something scary in it. The fright can be physical, psychological, or spiritual, or any combination thereof.
To me, it's a very freeing genre to write in. I just need to dig down into my own malaise of concerns and sure enough, there is always a twinge to be explore, which can be turned into something frightening.
So far, I've delved into historical events, trying my best to be authentic and accurate about what happened to the Donner Party, and using werewolves as both real and symbolic elements.
I've written a vampire trilogy that asked whether redemption could be achieved by anyone. An exploration of the religious and the spiritual.
I've written a story about hyper-intelligent wild pigs on the rampage called Tuskers, who represent nature's revenge against mankind's neglect and arrogance.
I've just finished two stories, one that include elements of Noir, with a gangster Golem, and another that is a sexual thriller involving Succubae.
I love fantasy and mysteries, but it seems to me that they are trapped by convention, if not formula. That to break from these conventions, the form has to be stretched so much that it bends and sometimes breaks -- or at the very least, calls attention to the effort. Whereas horror can be bent in any direction and it won't surprise the reader.
There are, of course, sub-genres within horror where the reader has expectations of certain conventions, but I don't have to go there; and even if I break from expectations, it seems to me that the horror readers are more open to such twists.
I have yet to have an idea for a story that I didn't think could be improved by exploring the horror elements of that story.
Or maybe I'm just twisted. Happily. 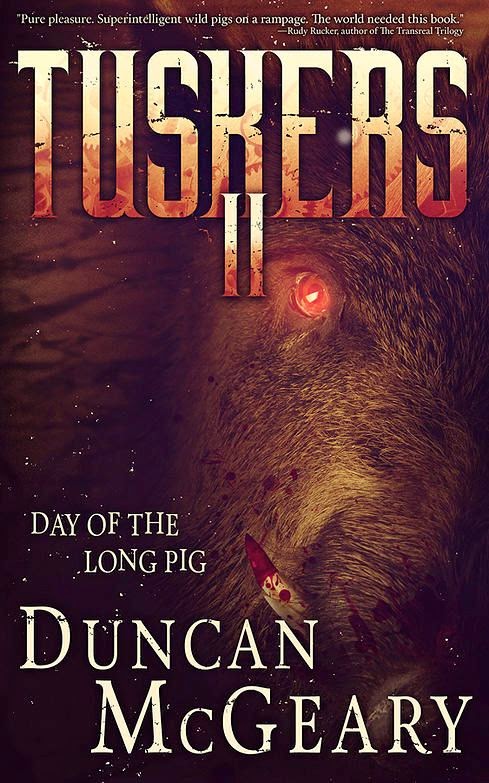 Barry and Jenny inherited a fortune, with a single stipulation: that they hunt down and eradicate the Tuskers. They can only hope the Tuskers are gone. They aren't sure they can follow through on the genocide of an entire new species.

Genghis, the smartest and most ruthless of the Tuskers, survives. Deep in the desert, he breeds with the wild pig population. These mutants learn from humans, and quickly surpass them. 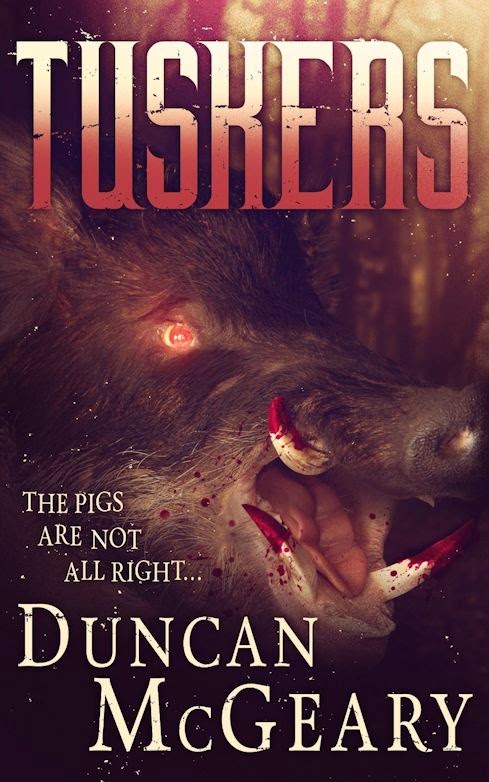 Barry had created a little piece of paradise in his southern Arizona backyard—until the javelinas came.

His battle to rid his property of the wild pigs soon escalated into war. Too late, he realized these weren't ordinary animals. They were something new, something meaner and smarter. These pigs weren't just at war with him; they were at war with the human race.

And the humans were losing. 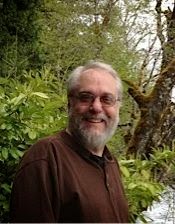 I've lived in Bend, OR, my whole life (which is becoming increasingly rare in this boom town.) After graduating from the U of O in the '80s, I wrote the fantasy novels Star Axe, Snowcastles and Icetowers. While trying to write full time, I started filling in at a local book/comic book store called Pegasus Books and eventually became manager—then 30 years ago, I bought the store from Mike Richardson, who is now the publisher of Dark Horse Comics.

In the last few years, Pegasus Books has become stable and I've returned to writing like crazy. I sold a four book deal to Books of the Dead Press, followed by another trilogy, "The Vampire Evolution," which consists of Death of An Immortal, Rule of Vampire, and Blood of Gold.

I've been very busy with several other books in the works, and I'm proud to have sold my Wild Pig Apocalypse, Tuskers, to Ragnarok via their Angelic Knight Press Imprint. I hope you guys will check out all my books, as I try to make them entertaining, fast reads. 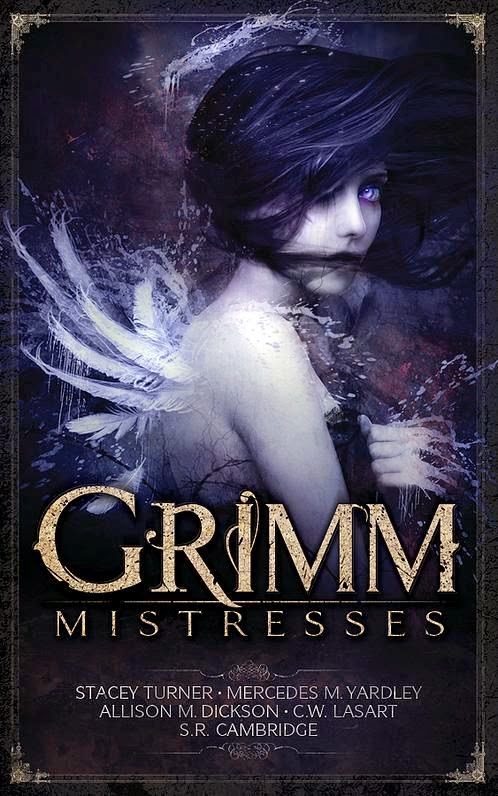 Remember the Grimm Brothers? Those dark fairy tales that made you leave the light on long before Disney went and sanitized them? Well, we do! Now the MISTRESSES GRIMM take back the night, five female authors who will leave you shuddering deliciously. Get ready to leave the lights on again with four pieces of short fiction bringing the Grimm Brother’s tales into the present. Be advised: these aren’t your children’s fairy tales!

STACEY TURNER is the former owner of Angelic Knight Press, now the Supernatural Horror Imprint for Ragnarok, and she remains its Managing Editor. She loves reading and writing horror and dark fantasy, but does not love scarecrows, creepy dolls, birds (of any sort), snakes, clowns or garden gnomes. She blogs at The Author Spot.

MERCEDES M. YARDLEY is a dark fantasist who wears stilettos and poisonous flowers in her hair. Her short story collection, Beautiful Sorrows, came out in 2012, and her novella Apocalyptic Montessa and Nuclear Lulu: A Tale of Atomic Love won the 2013 Stabby Award for "Best Short Fiction." Her debut novel, Nameless: The Darkness Comes, the first book of "The Bone Angel Trilogy," also released in 2013. Her latest title is Pretty Little Dead Girls: A Novel of Murder and Whimsy (September, 2014).

ALLISON M. DICKSON is the author of two published novels: horror-thriller Strings, and the dystopian epic, The Last Supper. She has nearly two dozen short stories in publications such as Apex Magazine. Her "Colt Coltrane" indie series features a detective and his robot sidekick in 1940s Los Angeles.

C.W. LASART is the author of Ad Nauseam: 13 Tales of Extreme Horror, her debut story collection, as well as multiple other stories in publications such as Shock Totem Magazine, Nightscape, Dark Moon Presents, and Fifty Shades of Decay. She is also one of three winners of the "Cemetery Dance" Amateur Writing Contest in 2011, and a card-carrying member of the Horror Writers' Association.

S.R. CAMBRIDGE is a fancy cocktail enthusiast, aspiring nerd writer, avid napper, trivia dork, pedant, and human encyclopedia of Simpsons quotes. Her career as an author is just getting started with stories in Grimm Mistresses by Angelic Knight Press and Blackguards: Tales of Assassins, Mercenaries, and Rogues from Ragnarok Publications.