Published:
Please welcome R.E. Stearns to The Qwillery as part of the of the 2017 Debut Author Challenge Interviews. Barbary Station is published on October 31st by Saga Press. 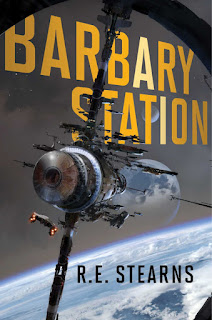 R.E.:  I've been writing short stories for as long as I can remember. I write to think, and because I have a terrible memory. When I discovered NaNoWrimo in 2008, I started writing novels.

R.E.:  Emotional scenes are challenging, because I am not an emotional person. I have to set my writing mood with music and pictures, and it's stressful and melodramatic. Then my agent or editor reads those supposedly melodramatic scenes and says "That's a pretty chill reaction for what just happened," and I do it all over again.

R.E.:  Two join a pirate crew, two engineers take on a security AI which has trapped the crew, and our heroines, on an abandoned space station.

TQ:  Tell us something about Barbary Station that is not found in the book description.

Adda and Iridian are romantic partners, not just professional ones.

TQ:  What inspired you to write Barbary Station? What appeals to you about writing Science Fiction?

R.E.:  SpaceX was just beginning to have success with its Grasshopper rocket when I was writing up ideas for Barbary Station. That got me thinking about what it would be like if modern corporations were given absolute freedom in scientific development and resource exploitation simultaneously, perhaps in the aftermath of a colonial war for independence. That's all a solid sci fi setting, but it wasn't anything like a novel until Iridian and Adda came together as characters. Sci fi is appealing because our present is always changing, which means the future is always changing in big ways. There are fewer locked-in expectations in sci fi than in fantasy.

TQ:  What sort of research did you do for Barbary Station?

R.E.:  I am conveniently married to a computer engineer, so I pestered him with questions like "Does this sound plausible?" and "Is this how you'd say that?" I also spent a lot of time reading on the NASA website, and downloading articles in college libraries. Packing for Mars by Mary Roach (2010) was a great resource, too. It's full of expert observations on the logistics of life in space, and it was so funny and disturbing that I kept having to remind myself to take notes.

TQ:  Please tell us about the cover for Barbary Station?

R.E.:  That cover is amazing, isn't it? That is Martin Deschambault's beautiful rendering of Barbary Station itself. I love that you can see the station's ring shape on the edges. The planets were necessary for lighting purposes but aren't present in the narrative, so in story terms, this is what Adda might see if she put the station exterior into her hallucinographic workspace.

TQ:  In Barbary Station who was the easiest character to write and why? The hardest and why?

R.E.:  Adda and I have a lot in common, so she was the easiest. We're about the same size, we obsess over projects we're working on, and we are similarly disconnected from most people around us. The main antagonist, the security AI, was toughest. It's hard for experts (which I am not) to predict what will go right and wrong with the learning algorithms we have today, let alone the monstrously complex stuff I'd expect to be developed 400 years from now. I had to make, and then keep track of, a lot of assumptions.

TQ:  Give us one or two of your favorite non-spoilery quotes from Barbary Station.

R.E.:  That was Earther thinking, as if air, light, humidity, temperature, pressure, and gravity were unrelated forces outside human control. It would’ve been enough to say the enviro wasn’t healthy.

R.E.:  I'm working on the sequel to Barbary Station! 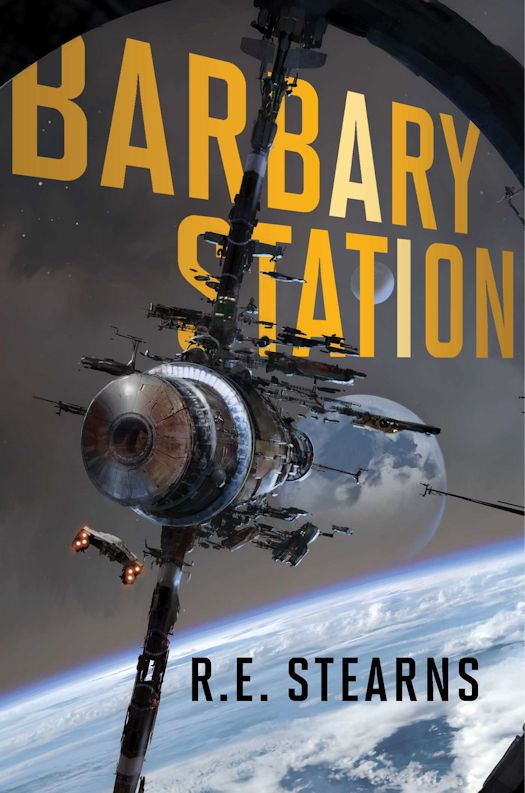 Two engineers hijack a spaceship to join some space pirates—only to discover the pirates are hiding from a malevolent AI. Now they have to outwit the AI if they want to join the pirate crew—and survive long enough to enjoy it.

Adda and Iridian are newly minted engineers, but aren’t able to find any work in a solar system ruined by economic collapse after an interplanetary war. Desperate for employment, they hijack a colony ship and plan to join a famed pirate crew living in luxury at Barbary Station, an abandoned shipbreaking station in deep space.

But when they arrive there, nothing is as expected. The pirates aren’t living in luxury—they’re hiding in a makeshift base welded onto the station’s exterior hull. The artificial intelligence controlling the station’s security system has gone mad, trying to kill all station residents and shooting down any ship that attempts to leave—so there’s no way out.

Adda and Iridian have one chance to earn a place on the pirate crew: destroy the artificial intelligence. The last engineer who went up against the AI met an untimely end, and the pirates are taking bets on how the newcomers will die. But Adda and Iridian plan to beat the odds.

There’s a glorious future in piracy…if only they can survive long enough.

R.E. Stearns wrote her first story on an Apple IIe computer and still kind of misses green text on a black screen. She went on to annoy all of her teachers by reading books while they lectured. Eventually she read and wrote enough to earn a master's degree in curriculum and instruction from the University of Central Florida. She is hoping for an honorary doctorate. When not writing or working, R.E. Stearns reads, plays PC games, and references Internet memes in meatspace. She lives near Orlando, FL with her husband/computer engineer and a cat.