Guest Blog by Linda Reilly and Review and Giveaway of Fillet of Murder - May 4, 2015 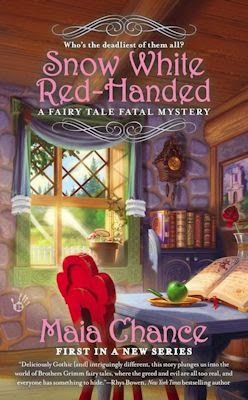 Maia:  Thanks so much for having me as a guest on your wonderful blog! I wrote my first book at age five, a thrilling adventure involving giraffes (spelled “drafs”), and have been at it ever since. I’ve always written mostly to amuse myself, writing those stories that I wish I could read, but haven’t been written yet.

Maia:  Well, I used to be a pantser, but now I’m a reformed pantser, mainly in the interest of saving time. But whenever I’m plotting a book in advance I feel like a kid staring out the window at all the other kids playing and having fun while I’m basically “grounded” with my plotting.

Maia:  I struggle with the uncertainty and lack of control in the first draft stage of a book. I love editing; editing is where the fun starts for me.

TQ:  Tell us something about Snow White Red-Handed that is not in the book description.

Maia:  Many of the book’s scenes are set in a castle and in the forest, as the book description mentions, but another important piece of the setting is the fascinating (I think, anyway!) town of Baden-Baden. In particular, roulette games at the Baden-Baden casino play a pivotal role in the plot.

Maia:  I was inspired to write this book while I was teaching a writing course based on fairy tales while simultaneously reading 19th-century American literature in preparation for my PhD exams. And rewriting fairy tales? Well, we all live with fairy tales, and they belong to all of us, and I think they have themes that resonate deeply with us as readers, even when—especially when?—they are framed in fresh, new ways.

My favorite fairy tale is “Beauty and the Beast”—which I’m starting to work on now for the third book in the Fairy Tale Fatal series!

TQ:  What sort of research did you do for Snow White Red-Handed?

Maia:  I had read quite a lot of academic fairy tale criticism going into the project, because of the writing course I’d taught. That certainly shaped some of Professor Penrose’s views on fairy tales. And then there was all the period research—clothes, transportation, and so on—that was incredibly fun. I also drew upon my travel experiences in that part of Germany, and I used historical travelogues and travelogues, too.

TQ:  In Snow White Red-Handed, who was the easiest character to write and why? The hardest and why?

Maia:  Prue, Ophelia’s young friend, was somehow the easiest character for me to write. Prue is kind of a hapless waif, the classic fairy tale heroine who has stuff just happen to her. Ophelia was tougher for me to write because she’s very practical-minded. Although Ophelia is, deep-down, susceptible to love, she doesn’t allow herself to cry or act too sentimental. Great traits in a heroine and sleuth, but traits that I personally, um, well, I’m working on them! Also, writing a strong and resourceful heroine in a book set in 1867 turned out to be a bit challenging, since so many things are stacked against her—I mean, she has to wear a corset through the whole thing!

TQ:  Give us one or two of your favorite non-spoilery lines from Snow White Red-Handed.

“Ophelia was suddenly afflicted with unfamiliar—and shockingly impractical—notions creeping into the back of her mind. Unwelcome, these notions were, like tiny intruders sneaking in through a rusted trap-door. Maybe Professor Penrose was right. Maybe fairy tales were real.”

“Just like a pastry, you had to make the most of a man’s lovesickness when it was fresh and hot.”

“‘Come on! Throw me that key!’ Prue struck her wistful Juliet’s pose in the tower window frame. Assuming Juliet ever had a pimple brewing on her left nostril.
Hansel scratched his head. ‘Oh, all right.’”

Maia:  Cinderella Six Feet Under, the second book in the Fairy Tale Fatal series, will be released next fall. And next fall Come Hell or Highball, the first book in my new series, The Discreet Retrieval Agency, will also be released. It’s going to be an exciting and busy year. 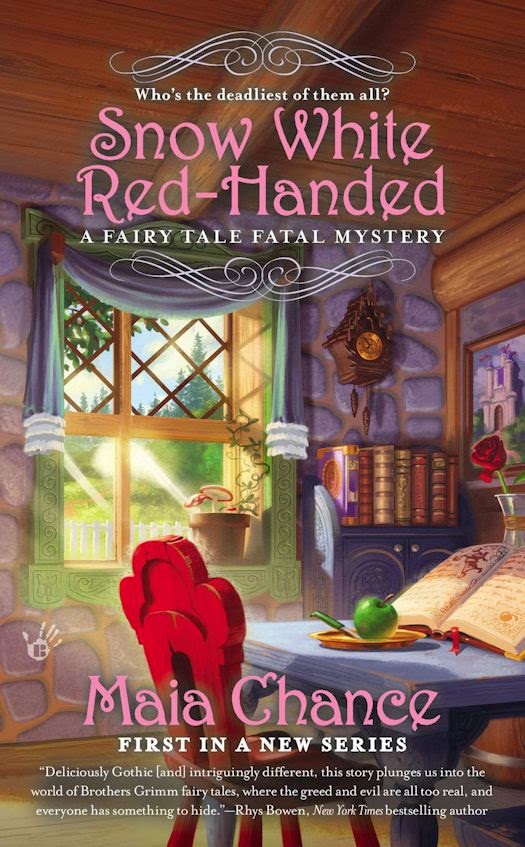 Miss Ophelia Flax is a Victorian actress who knows all about making quick changes and even quicker exits. But to solve a fairy-tale crime in the haunted Black Forest, she’ll need more than a bit of charm…

1867: After being fired from her latest variety hall engagement, Ophelia acts her way into a lady’s maid position for a crass American millionaire. But when her new job whisks her off to a foreboding castle straight out of a Grimm tale, she begins to wonder if her fast-talking ways might have been too hasty. The vast grounds contain the suspected remains of Snow White’s cottage, along with a disturbing dwarf skeleton. And when her millionaire boss turns up dead—poisoned by an apple—the fantastic setting turns into a once upon a crime scene.

To keep from rising to the top of the suspect list, Ophelia fights through a bramble of elegant lies, sinister folklore, and priceless treasure, with only a dashing but mysterious scholar as her ally. And as the clock ticks towards midnight, she’ll have to break a cunning killer’s spell before her own time runs out…

This delightful mystery that spans the genres of cozy and historical mysteries is set in the Victorian Era circa 1867. Snow White Red-Handed is the first in a new series that follows two American actresses, Ophelia and Prue, who find themselves unemployed while on a transatlantic trip. Ophelia uses her talents for subterfuge to obtain jobs for both her and her friend as maids to an American millionaire and his new bride. After they arrive at a fairy tale like castle in a German forest Ophelia and Prue quickly find themselves in the midst of a murder.

Ophelia and Prue are very well drawn characters. Ophelia comes across as very strong and able to adapt to whatever situations she finds herself in, while Prue is depicted as a bit of a ninny, albeit a very sweet natured one. I loved the vernacular the author uses for these two ladies. Their slang provides for humorous exchanges, not only with themselves, but with the highbrow sophisticates they come into contact with. The auxiliary characters are varied. The most memorable include a sinister gambling house owner, a mysterious princess, a well-spoken and handsome golden-haired young gardener aptly named Hansel, a meal-obsessed fairy tale expert hired to determine the authenticity of a tiny cottage purported to belong to Snow White’s dwarf friends, and his colleague, the attractive but aloof Gabriel Penrose. There is also great potential for romantic entanglements against the backdrop of the deep fairy tale forest.

The author does a wonderful job of keeping the reader’s attention with seamless and swift transitions in the action and point of view. The scenery was depicted in simple detail so it did not intrude upon the story, but did give the reader a good sense of place and time. The dialogue between the characters is realistic and delivered in snappy and refreshing style. There are many little twists in the plot that kept me interested. The characters are likeable enough to make me want to know what happens to them.

My only complaint with this book is minor and involves the ending. While the murder mystery is tied up in a satisfactory way, as one would expect of a cozy mystery, the interpersonal relationships between Ophelia and Prue and the dashing young men they met at the castle are left completely unresolved. This is done in a way that will lead into the second installment in the Fairy Tale Fatal series which takes place immediately after the events of Snow White Red-Handed. It is simply a personal preference of mine that I tend to prefer books in a series to have more definitive endings regarding both the mystery and the subplots. That being said, I think the ending left quite a bit for the author to pick up on in subsequent books in the series, and because she wrote such engaging characters in this first installment, I am already looking forward to seeing where she takes Ophelia and Prue.

Overall, I greatly enjoyed this novel. The concept of a murder mystery encompassing fairy tale elements is clever and well executed and the characters are drawn in such a refreshing way as to leave a great deal to build on in the future. Snow White Red-Handed is a fun and quick read that never felt boring or flat. I will definitely be looking for the next installment entitled Cinderella Six Feet Under (January 2015).

********
You may have noticed a new name as reviewer. Please kindly welcome Jennifer Dean to The Qwillery family! We are thrilled that Jennifer has joined us. You may read about Jennifer on the About Us page. 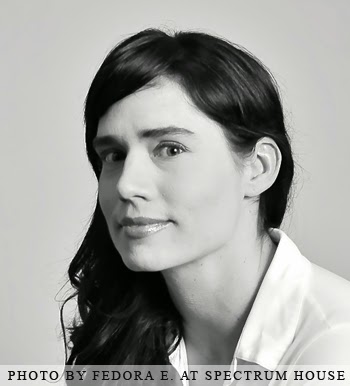 Maia Chance writes historical mystery novels that are rife with absurd predicaments and romantic adventure. She is the author of the Fairy Tale Fatal and The Discreet Retrieval Agency series, and her first mystery, Snow White Red-Handed, will be released in November 2014 by Berkley Prime Crime.

Maia is a candidate for the Ph.D. in English at the University of Washington. This means that the exploits of Fairy Tale Fatal’s heroine, variety hall actress Ophelia Flax, were dreamt up while Maia was purportedly researching 19th-century American literature and fairy tale criticism. The Discreet Retrieval Agency series was born of Maia’s fascination with vintage shoes, automobiles, and cocktails combined with an adoration of P. G. Wodehouse and chocolate.

Upcoming titles include Come Hell or Highball (St. Martin’s Press, 2015) and Cinderella Six Feet Under (Berkley Prime Crime, 2015). Maia lives in Seattle, where she shakes a killer martini, grows a mean radish, and bakes mocha bundts to die for.