The Qwillery | category: Books of Blood and Iron 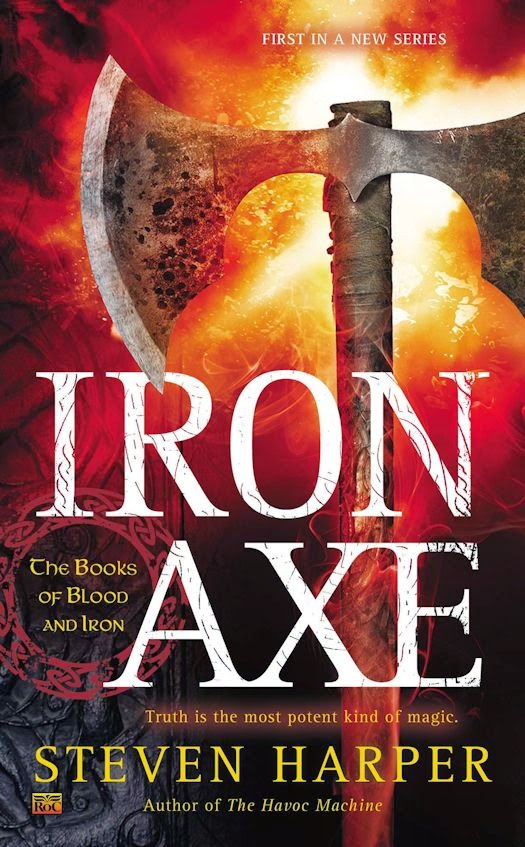 In this brand new series from the author of the Clockwork Empire series, a hopeless outcast must answer Death’s call and embark on an epic adventure....

Although Danr’s mother was human, his father was one of the hated Stane, a troll from the mountains. Now Danr has nothing to look forward to but a life of disapproval and mistrust, answering to “Trollboy” and condemned to hard labor on a farm.

Until, without warning, strange creatures come down from the mountains to attack the village. Spirits walk the land, terrifying the living. Trolls creep out from under the mountain, provoking war with the elves. And Death herself calls upon Danr to set things right.

At Death’s insistence, Danr heads out to find the Iron Axe, the weapon that sundered the continent a thousand years ago. Together with unlikely companions, Danr will brave fantastic and dangerous creatures to find a weapon that could save the world—or destroy it.

Iron Axe brought back fond memories of a classic fantasy book while still offering a wonderfully unique take on the genre. The story follows the basic quest formula, but the characters and their inner struggles are the stars of the book. Each of the struggles are strong enough to contain their own novels and are broad enough to interest almost anyone. Steven Harper created a world that I never got tired of exploring. He takes very well-known monsters and races and gives them interesting twists that requires the reader to look at these different races in a new light.

Harper's protagonist, Danr, is a half-human, half-troll, giving him a fascinating inner struggle throughout the book. Ever since Danr's mother died, he's struggled to find a place in his world among the human race, and when that fails he attempts to find one with the trolls. Danr's struggle to understand what he is—man or monster—and where he belongs, sends him all over the world looking for answers. On his journey, he also tries to find a way to stop a war that's threatening to spread over the whole continent and involve several different races.

Truth is another theme that runs throughout the book and, at times, nearly destroys Danr's friendship with both Aisa and Talfi. It begs the question: Is the truth always worth knowing or sharing? Should those we love be honest with us all of the time or is that too destructive?

My one issue with the book was Harper's choice to negate some of the results of the characters' choices at the end of the book. However, I understand why he did it, and I'm sure there will be some readers that will enjoy his decision. I, for one, enjoy seeing my characters have to make the hard choices and then live with the consequences no matter how hard or destructive. I feel like that's where a story truly becomes interesting—when we see how characters pull through.

Iron Axe is an enjoyable first book to a new series. It has plenty to offer to long-time fantasy readers as Harper twists the races and offers interesting struggles. There are acts of violence, language, and adult situations, so I would recommend it to older teens and adults. I would also recommend this book to anyone who loves interesting characters and character struggles. I'd also recommend it to anyone looking for a new take on familiar monsters and races.
Source: qwillery.blogspot.com
0 Comments+ Sharelabels (7)Flag
AllBook ReviewsBooks of Blood and IronBranniganIron AxeRocSteven Harperreview