Published:
Happy Penultimate Monday in July. I spent yesterday at Brass City Comic Con. It's a small one day con, but a great deal of fun. I took many photos. It's given me an idea for a series on Comics in Connecticut featuring some of the comic book writers, artists, pencilers, etc. that live in the state.  So look for that soon and a post about Brass City Comic Con sometime this week.

Monday - Interview with Ben H. Winters. His most recent novel is The Last Policeman, a mystery set in pre-apocalyptic New Hampshire. It's the first novel in a trilogy. The Last Policeman was published on July 10, 2012.


There are not many books out this week. Watch out for the 31st of July though!!

Casey:  Hmmm...thinking about this one. Not sure I have any writing quirks. At least nothing I think of as a quirk! I write all day, 5 days a week, on weekends, too, if I've got a deadline breathing down my neck. One of the things I do that might be unusual is that I set a clock for 45 minutes. In that time, all I do is write. At the end of the 45 minutes, I get a 15 minute break to do whatever I like (check email, empty the dishwasher, etc.). Not sure that qualifies as a quirk, but I do know it helps keep me on task and that since I started doing it, I get more done each day.

Casey:  Oh my, there are so many challenging things! I suppose one of the biggest is just to stay focused. Life gets in the way too often.

TQ:  What inspired you to write the Pepper Martin Mystery series?

Casey:  I love cemeteries! I love exploring them and taking photos in them. The Pepper Martin idea grew out of that. It gave me the chance to play with a character who works in a cemetery. I'm also interested in the paranormal, so having her investigate mysteries for ghosts is a natural!

Casey:  Pepper travels to New Mexico to ransom a friend who's been kidnapped. Has to take along the bones of a long dead Wild West star to do it.
I have no idea if that's 140 characters or less. Don't Tweet. Don't want to learn!

TQ:  Without giving anything away, what is/are your favorite scene(s) in Wild Wild Death?

Casey:  I'm quite fond of the opening scene, with Pepper heading to the cemetery to dig up a body. The scene is especially meaningful to me because I never wrote the opening words (It's tough to decide what to wear to a body snatching) until I was about 75 pages into writing the book. Revelation time! I knew I had to go back to the beginning and start right there.

TQ:  In Wild Wild Death, who was the most difficult character to write and why? The easiest and why?

Casey:  Pepper is always easy for me because at this point, in book #8, I know her pretty well. I suppose her friend, Dan Callaghan, was the hard to write because Dan is kind of a hard guy to pin down. Always has been since book #1.

TQ:  Pepper aside, do you have a favorite character from Pepper Martin Mystery series?

Casey:  I love Ella, Pepper's boss. And of course, there's Quinn, Pepper's hotter than a firecracker on again/off again boyfriend. There's a new man in her life in this book, too, and he was great fun to get to know.

TQ:  Do you and Pepper Martin have anything in common?

Casey:  Not much. I love cemeteries. Pepper, not so much. She's way too into fashion for my taste. And she has no respect or interest in history. That's probably why she's so much fun to write, we're nothing alike!

Casey:  Pepper #9 is written and will be out in September. It's called "Supernatural Born Killers," and a whole lot of questions about Pepper and her life and her relationships will be answered. It's great fun, because I got to play with the whole Superman mythos. He was created in Cleveland, you know. Pepper is getting the chance to find out a whole lot about super heroes.


About the Pepper Martin Mysteries 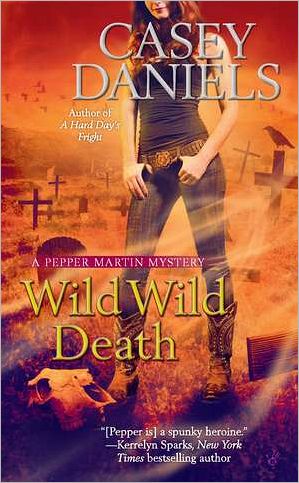 Her job has been cut, she's low on cash, and her detective sometime- boyfriend refuses to even talk about her ability to see the dead and solve their murders. So Pepper is most certainly down for a vacation to get her spirits up. But when her cute scientist friend Dan is kidnapped, Pepper soon stumbles upon another deadly mystery that brings her to New Mexico. And she's after a clever murderer-one whose idea of Boot Hill has nothing to do with Jimmy Choo. 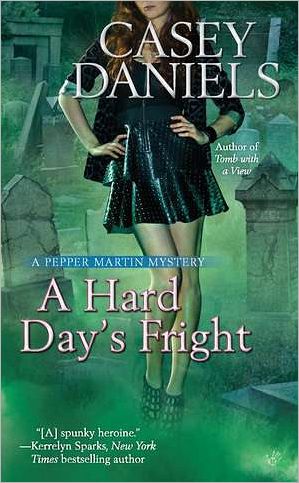 What happened to a teenager named Lucy one night in 1966 after a Beatles concert? She rushed the stage, kissed Paul, started home with her friends, and was never seen again-until cemetery guide and unintentional PI to the dead Pepper Martin sees her as a ghost. Lucy's spirit can't rest in peace until her body is found and buried. But how will Pepper track down a missing corpse after forty-five years? 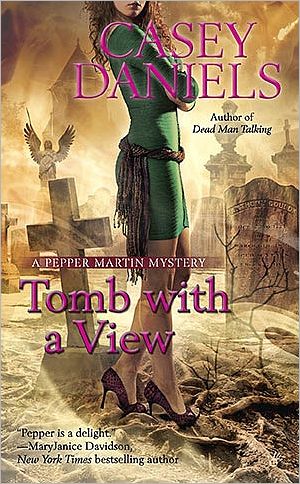 Cleveland's Garden View Cemetery is hosting a James A. Garfield commemoration. For tour guide and reluctant medium Pepper Martin this means that's he'll surely be hearing from the dead president himself. And when she's assigned to help plan the event with know-it-all volunteer and Garfield fanatic Marjorie Klinker, she'll wish Marjorie were dead...too bad someone beats Pepper to it. 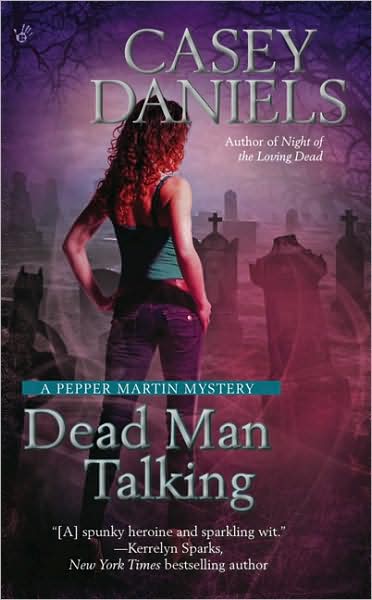 Heiress-turned-cemetery-tour-guide Pepper Martin is not happy to discover that a local reality TV show, Cemetery Survivor, will be filmed at Cleveland’s Monroe Street Cemetery—and she has to be a part of it. To make matters worse, the ghost of a wrongly convicted killer needs Pepper’s help to clear his name. But digging for the truth could put her in grave danger. 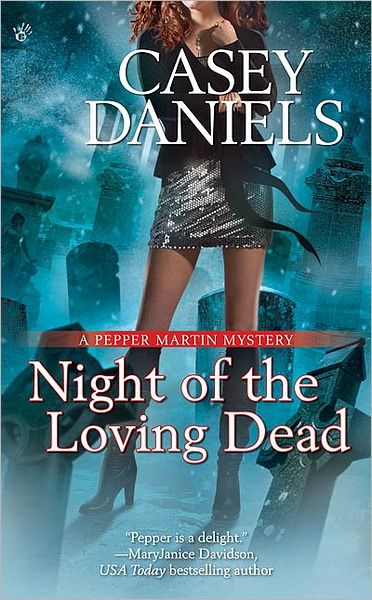 And now, in her fourth hip, quirky mystery, she's all ours.

Pepper Martin, heiress-turnedcemetery- tour-guide, often has her hands full with two hotties and the ghosts who won't let her rest—or work, or shop—in peace.

Now the specter of a young woman in a lab coat wants Pepper's help. Before the woman died, she worked with a sexy, mysterious doctor who coincidentally once saved Pepper's life—and who the woman claims is now in danger. But Pepper doesn't know that there's more to the story, including a devious doctor—and an obsessive, crazy love. 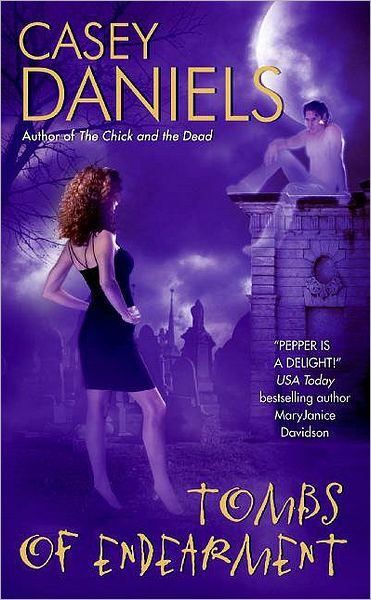 Cemetery tour guide Pepper Martin never imagined she’d get to meet rock legend Damon Curtis, the bad boy poet who made millions of teenage girls scream. After all, he kicked the bucket years before she was born. But thanks to her newfound ability to chat up the dead, Pepper’s got a front row seat perfect for swooning over the still-sexy Damon’s latest lyrics. He’s convinced that his former bandmate Vinnie Pallucci murdered him back in ‘71, and he’s promised Pepper she won’t get any rest or peace until she helps him prove it.

But when Pepper goes behind the music, she finds Vinnie with a knife in his heart and the rest of the band members running for their lives. And if Pepper doesn’t snare the killer soon, Damon’s next hit from the great beyond might be her swan song. 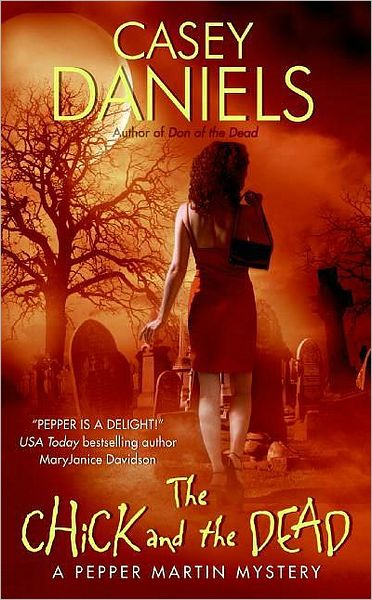 Ever since the former rich girl-turned-Cleveland cemetery tour guide banged her head on a headstone, she sees dead people. Worse still, she hears them—and they won’t shut up! Now it’s Didi Bowman, a poodle-skirted relic from the Great Beyond, who’s bending Pepper’s ear, complaining that her famous author sister, Merilee, has done her wrong. Trouble is, if Pepper proves it, she’ll break the hearts of millions of Merilee’s fans. And if she doesn’t, Didi’s ghost may never go away.

Pepper needs peace and quiet (and rent money), so the cash-strapped ex-heiress agrees to take a job as Merilee’s secretary and dig around the family tree. But when she unearths more than she bargained for—like an illegitimate daughter, a bunch of illicit love affairs, and a possible murder—suddenly a very poisoned pen is all set to write Pepper out of the story permanently. 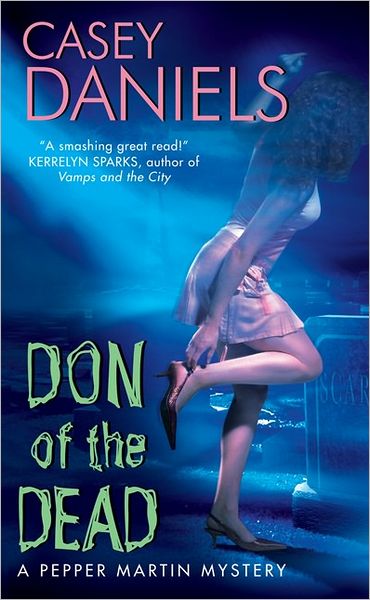 She sees dead people, Beautiful, smart, and chic, Pepper Martin never had to work a day in her life — until her surgeon daddy was convicted of fraud, her wealthy fiancé took a powder, and the family fortune ran bone dry.

Suddenly desperate, the inexperienced ex-rich girl was forced to take the only job she could get: as a tour guide in a cemetery. But a grave situation took a turn for the worse when a head-on collision with a headstone left her with an unwanted ability to communicate with the disgruntled deceased . . . and now Pepper has a whacked Mafia don demanding that she hunt down his killers — and threatening to haunt her until she does. Casey Daniels once applied for a job as a cemetery tour guide. She didn't get the job, but she did get the idea for the Pepper Martin mystery series. Casey learned to love mysteries early thanks to her dad, a Cleveland Police detective, who on his days off went looking for stolen cars--with Casey along for the ride. Casey began her career writing romance. These days, she write the Pepper Martin series, and the Button Box mysteries as Kylie Logan. Next year, she'll have a new series premiering. She lives in northeast Ohio.

Casey blogs on Wednesdays at:

The Little Blog of Murder

What:  One commenter will win a copy of Wild Wild Death (Pepper Martin Mysteries 8) from Casey! US ONLY.

Who and When:  The contest is open to all humans on the planet earth with a United States mailing address. Contest ends at 11:59pm US Eastern Time on Wednesday,January 11, 2012. Void where prohibited by law. No purchase necessary. You must be 18 years old or older to enter.