Welcome to August. I can't believe July is over the year is more than halfway gone. I have been looking at my Goodreads reading challenge and I need to pick up the pace if I am going to read as many books as last year. So how did I do this week? 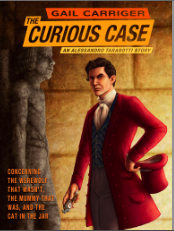 Even though am still reading The Dark Defiles by Richard K. Morgan I was tempted by a book that Qwill sent me - Havoc by Ann Aguirre. This is the second installment of the Dred Chronicles and I couldn't resist to find out what happened to Dred and Jael on the prison ship. I will be writing a full review of this book so keep your eye out for it to find out more. I got halfway through and left it in my desk at work (I have desks in 2 different buildings miles apart) and had to make a special trip 3 days later to pick it up. I knew I shouldn't have been reading Havoc before I finished Morgan's book so I got in a big panic that I would have nothing to tell you about.  I was soon searching Amazon for a book I could read in a day or two and came across a short story from Gail Carriger's Parasol Protectorate series The Curious Case of the Werewolf That Wasn't, the Mummy That Was, and the Cat in the Jar. I thought this tiny short story would be perfect to give me a feeling of accomplishment. When Carriger writes a short story she certainly makes it short. I feel like the story was finished before I even started it. I really enjoyed The Parasol Protectorate series but I think that Carriger could have left this series alone as The Curious Case... fell a bit flat for me. I am not a big fan of short stories as I always feel like that they stop too soon and this is definitely the case here.

Back I went to Amazon as I still needed a another book. I came across Copperhead by Tina Connolly which is the second novel in the Ironskin series. I had been waiting for the price of this book to drop a bit before I bought it and discovered it had so I was quick to download it. Copperhead tells the story of Helen who is the sister of the heroine, Jane, from book 1 and is set a few months after the events of that book. Helen is leading a cloistered life as the wife of her controlling, aristocratic husband Alistair. A sinister group called Copperhead are trying to rid the world of the fey and all the women with fey enhanced faces are at risk. Helen and her sister Jane are in the midst of helping these women when Jane goes missing. Despite her fears and feelings of inadequacies Helen risks herself and her new friends to find Jane.

Copperhead is a solid second instalment of a engaging series. I wish I had gone back and re-read the ending of Ironskin as there were a few re-caps that I couldn't remember. I also couldn't figure out why Jane and her fiance, Rochart, weren't together and it wasn't really explained either. I think that Connolly does a good job of creating empathy for the near perfect Helen. She isn't a character I especially like or perhaps you aren't supposed to like so I think that Connolly was especially clever to make Helen as engaging as she is. I do wonder where Connolly will take these characters in Silverblind (Ironskin 3), which is out in October.

I finished my week by reading Unclean Spirits by Chuck Wendig. This is the first book of Gods and Monsters shared world series. It tells the story of Cason who has become embroiled with the gods and is on the run trying to rescue his wife and son. The story is told from a few different POVs including Cason, his wife Alison and the goddess Psyche. The gods are malevolent with a capital 'M' and Cason risks all to save his family.

This isn't an easy read as the gods aren't the only dis-likeable characters. Cason himself isn't the easiest character to empathize with. Cason reminded me a bit of a Mookie Pearl from Wendig's The Blue Blazes - a bit conflicted but trying to do the right thing for his family in the end. Nearly every religious and mythical god/goddess is mentioned in Unclean Spirits and it seems there was a competition who could be more horrid. I don't know who won but I think Aphrodite made a sterling effort! I am not planning to continue with this series as the first book is a relentlessly violent read without even a glimmer of something good happening. While the Miriam Black and Mookie Pearl books are equally violent there is more of a sense of good vs evil in those stories than there is in this first instalment of the Gods and Monsters series. If you like a story that is told at a frenetic pace, lots of violence and malevolent goddesses out for revenge then this is the book for you. Note that Wendig kicked off the series and that different authors will be writing books for this ongoing series. Next up is Mythbreakers by Stephen Blackmoore (December).

That's all for me this week. I am looking forward to some new releases I hope to buy so until next week Happy Reading.
Source: qwillery.blogspot.com
0 Comments+ Sharelabels (8)Flag
AllChuck WendigCopperheadGail CarrigerGods and MonstersIronskinMelanie's Week in ReviewTina ConnollyUnclean Spirits