Guest Blog by Max Gladstone - Place as character in the Craft Sequence - July 22, 2014

Published:
Please welcome Max Gladstone to The Qwillery. Full Fathom Five, the 3rd novel in the Craft Sequence, was published by Tor on July 15, 2014. 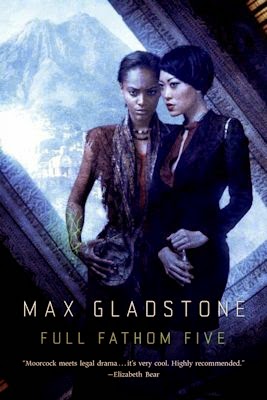 Place as character in the Craft Sequence
A dragon lived in the woods near the school where I grew up.

A tall thin tree, maybe a cedar, had grown somehow bent into a V: its trunk curved down sharp ten feet above the ground and descended. Then it died, but stayed standing. Insects and rain chewed most of the down-angled slope to a thin rail. Above, where mandibles had not yet reached, the rail seemed to protrude from a long smiling mouth. A thick red knot above the mouth formed an eye. So: dragon.

I paid the dragon respects each time I passed on my way to the bluff. He seemed to appreciate it.

The magic of my adolescence was the magic of middle Tennessee, which is to say of trees and stone and hidden pools without obvious source. Every quarry had a body in it somewhere. Having moved south from Ohio, I could only remember the magic I'd left, of horizon-spanning Lakes and strange coolant towers, of freezing wind and freshwater hurricanes that tore the roofs off local high schools. Tennessee magic was softer and subtler, magic of shadows and green smells, of living things and unrestrained wild, of copses beyond which you'd find only deeper woods. In middle Tennessee, as in much of America, the door through the hedge leads to more hedge. The plateaus of my youth crossed state lines. Below them stretched horizons of patchwork farm country. Local magic was deep and squirrely, by turns vicious or oppressive as the heat, or liberating, terrifying: an orb weaver with a body the size of my fist suspended in the center of a clearing on a jeweled web anchored to trees ten yards apart.

All magic has its place, I guess is what I'm trying to say, and every place has its magic. Each person's relationship to and sense of that magic may differ, but the magic remains.

Writing fantasy, I try to understand the contours of a place's magic. If I don't, no system I create, no strange creatures I invite into a story, will feel at home within. Ted Chiang describes a magical worldview as one that supposes the world's in relationship with you—and in that sense place-magic absolutely exists, even if we don't want to give my experience of a place's magic any more reality than a sort of Feuerbachian projection of my own feelings about the place's feelings about me. But the sensation's real, and if we want to investigate definitions and layers of reality we'll be here through a philosophy thesis and into next year, so let's just assume that Achilles eventually crosses the finish line and magic—or a sort of it—exists.

When I create a setting, though—or knock a real setting over the back of the head and drag it off into fantasyland—I need to think carefully about the kind of magic the place I'm writing would possess. Dresediel Lex, the setting of my book TWO SERPENTS RISE, was a kind of LA / Beijing hybrid city, dry and dusty and hot and crystal, defined by its lack of water. It was afraid of fire and poison and moving earth. It loved the sun, and color, and dancing, and the ocean. It glanced hastily over its shoulder toward the seat of government. That shaped the magic—and the perspective appropriate to the book. Basically, my main character needed to be someone more at the mercy of his place's magic than in control of it.

In FULL FATHOM FIVE, my new book, I needed new magic—less desert and more island. I was lucky enough to be able to travel, and draw on old kayaking experience and a few years of working near a port, so beaches and forest and sea air were fresh to my memory. My island of Kavekana is a sort of financial services hub for the global magical economy, and does a brisk tourist trade to boot, which leaves the society sharply stratified and torn away from itself—and also shapes the magic of the place and characters' responses to it.

For more inspiration I studied millennialist "cargo cults," which make more sense the more you learn about them—as far as an observant Pacific Islander in the 19th century could tell, colonists received finished goods from their ancestors over the sea. Missionaries certainly weren't making those rifles themselves! (If we read "established capital" for "ancestors," which there's no reason we shouldn't because they're basically the same thing, the locals were 100% correct in their interpretation of observed phenomena!) Why weren't locals receiving cargo from their ancestors? Because their ancestors' shipments were being blocked, or even stolen! Perfectly logical. Not precisely right for the political situation on Kavekana, or the metaphysical background of the Craft Sequence in general, but a good reminder that local beliefs which seem silly to folks from an imperial culture often aren't silly at all. Also the history suggested a number of symbolic parallels with offshore banking, a subject I wanted to investigate anyway…

So we have Kai, a freelance priestess whose job is to build lifeless idols that mimic the effects of gods, and Izza, a storyteller and leader of a band of kids who have built their own street mythology outside the supervision and control of the island's sanctioned priesthood. Local horrors are built of freedom and control, and the illusion of each in which the other hides. Characters' anxieties revolve around telling the truth or having their true face seen, accepting lies told and identities provided or rejecting both, around telling and hearing stories. The nation hovers on the blade of a knife, trying to chart an independent existence in a complicated and dangerous world.

I don't mean by all this to suggest that one must start with place first—I don't even mean that I always, or even ever, start with place alone. An idea or a character or a setting or a cool turn of phrase or whatever gets me writing is just the first stone on a multidimensional Go board, and as I continue the game (against who? I don't know her name exactly, but my adversary's patient and always grinning…) the walls and structures build and reinforce one another. But place-magic is an important corner of the board, and if I don't understand how it connects to everything else, I've at best lost myself territory, at worst created a group doomed to strangling death.

And on top of that, it's fun. Because when you ask places about their magic, you get to meet their dragons. 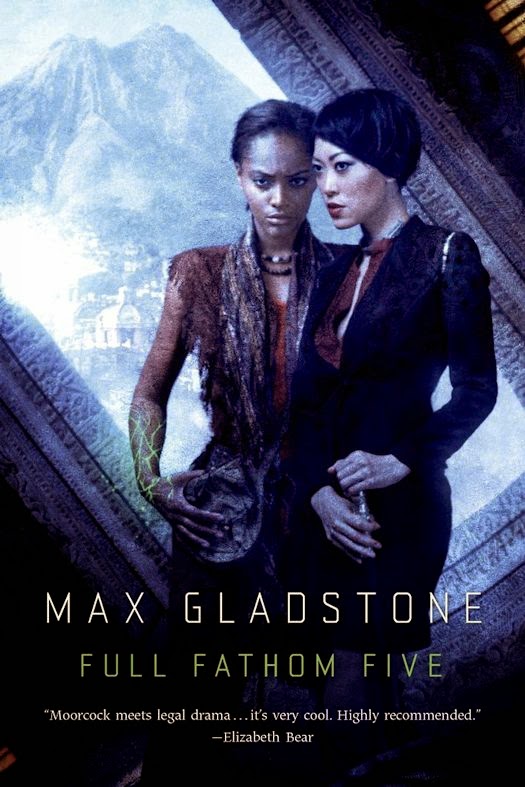 
Previously in the Craft Sequence 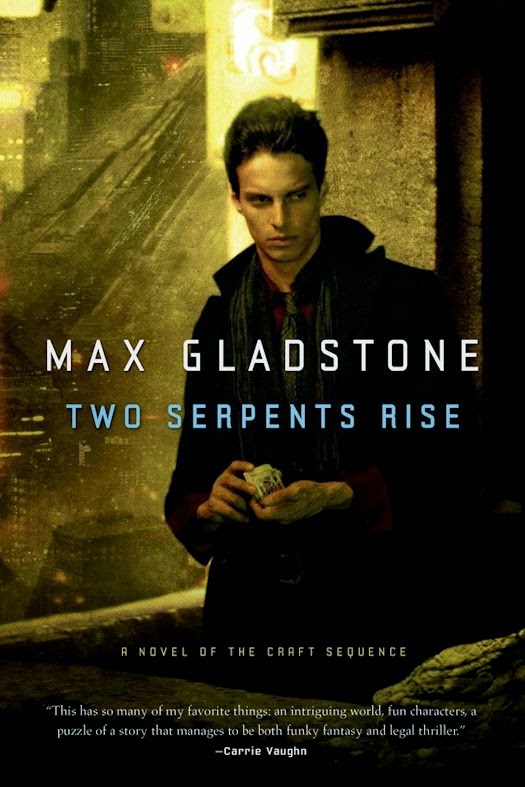 In Two Serpents Rise by Max Gladstone, shadow demons plague the city reservoir, and Red King Consolidated has sent in Caleb Altemoc—casual gambler and professional risk manager—to cleanse the water for the sixteen million people of Dresediel Lex. At the scene of the crime, Caleb finds an alluring and clever cliff runner, Crazy Mal, who easily outpaces him.

From the beginning, Caleb and Mal are bound by lust, Craft, and chance, as both play a dangerous game where gods and people are pawns. They sleep on water, they dance in fire...and all the while the Twin Serpents slumbering beneath the earth are stirring, and they are hungry. 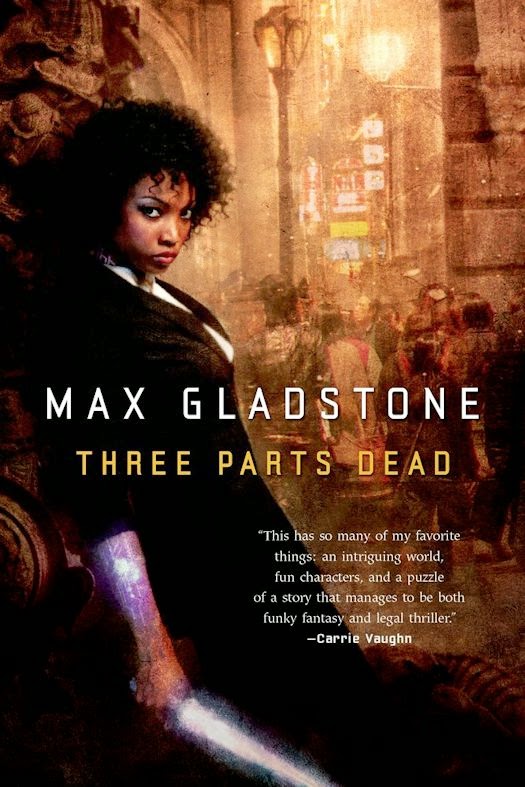 Set in a phenomenally built world in which justice is a collective force bestowed on a few, craftsmen fly on lightning bolts, and gargoyles can rule cities, MAX GLADSTONE's Three Parts Dead introduces readers to an ethical landscape in which the line between right and wrong blurs. 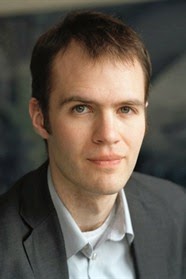 MAX GLADSTONE went to Yale, where he wrote a short story that became a finalist in the Writers of the Future competition. He lives in Boston, Massachusetts. Full Fathom Five is his third novel.