Published:
Please welcome Mark Henry / Daniel Marks to The Qwillery's as part of the Authors After Dark Author Spotlight Interviews.

DM:   I was always a big reader. Horror, mostly, even as a young child, but I'd never really held any aspirations of being a writer. Lots of other jobs, yes. I quite wanted to be an architect and a professional chef, but settled ultimately on psychotherapy. I worked in crisis intervention and child and family therapy for twelve years, which is probably ten years longer than anyone in their right mind should. During that time, an already dark sense of humor turned absolutely necrotic and when it was time to call it quits, I wasn't fit for anything else but writing.

DM:  Resiliency. It's funny, because that's the first thing that came to me when I read this question but it's so true. When my adult urban fantasy series tanked and I was floating out there without a contract and looking at writing a book on spec, that was a real turning point. I was wounded and not in a good place and it probably would have been easier to just start job hunting and give up on writing altogether. But I didn't, I buckled down and wrote something that I'm exceptionally proud of and then we sold it to one of the big guys. I was ecstatic. Broke, but ecstatic.

DM:  My words are pretty dark and my humor is even darker, but it's smart and I cram as many pop culture references as I can onto every page. I know most of them will fly right over people's heads, but it's the way I think and I can't change that. So readers, prepare for the possibility of some mixed emotions. You may laugh and immediately be ashamed of yourself. You may be expecting a laugh and I'll throw you into a pit of horrors. I guess you never know what to expect.

DM:  My first young adult fantasy novel as Daniel Marks, VELVETEEN, comes out on October 9th of this year from Delacorte Press/Random House Children's Books. It's about the victim of a madman named Bonesaw who winds up in purgatory, finds a way to slip back into the world of the living with one goal in mind: haunting her killer to death. But distractions abound. Ghostly revolutionaries are plotting mayhem across the veil, shadow creatures are terrorizing the crumbling tenements of her district and if that weren't bad enough she has a new and unreasonably hot coworker that she's not allowed to touch. Velveteen is a dark and irreverent fantasy that drifts into all out horror when you least expect it. I'm thrilled for people to read it!!!

DM: No! Thank you, so excited to be here! 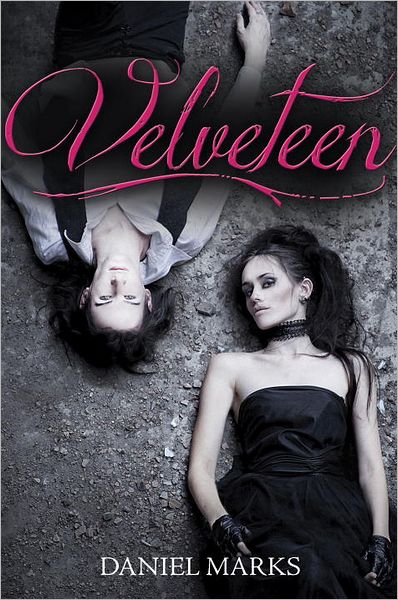 Velveteen Monroe is dead. At 16, she was kidnapped and murdered by a madman named Bonesaw. But that's not the problem.

The problem is she landed in purgatory. And while it's not a fiery inferno, it's certainly no heaven. It's gray, ashen, and crumbling more and more by the day, and everyone has a job to do. Which doesn't leave Velveteen much time to do anything about what's really on her mind.

Velveteen aches to deliver the bloody punishment her killer deserves. And she's figured out just how to do it. She'll haunt him for the rest of his days.
It'll be brutal . . . and awesome.

But crossing the divide between the living and the dead has devastating consequences. Velveteen's obsessive haunting cracks the foundations of purgatory and jeopardizes her very soul. A risk she's willing to take—except fate has just given her reason to stick around: an unreasonably hot and completely off-limits coworker.

Velveteen can't help herself when it comes to breaking rules . . . or getting revenge. And she just might be angry enough to take everyone down with her. 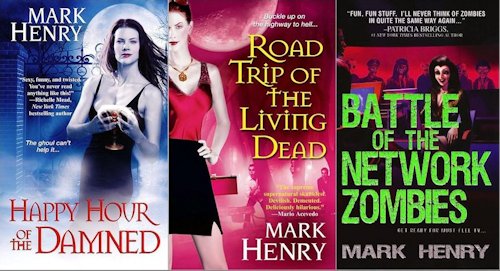 Originally released in Trade Paperback, the Amanda Feral series is now available in Mass Market Paperback too! Check it out at Kensington. 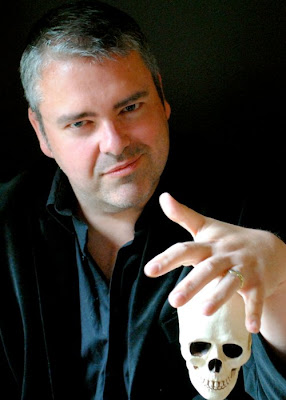 Mark Henry writes adult urban fantasy, screenplays and young adult horror. He spends way too much time glued to the internets and collects books obsessively (occasionally reading them). He’s been a psychotherapist for children and adolescents, a Halloween store manager, and has survived earthquakes, volcanoes and typhoons to get where he is today, which is to say, in his messy office surrounded by half empty coffee cups. He lives in the Pacific Northwest with his wife, Caroline, and three furry monsters with no regard for quality carpeting. His debut young adult novel (as Daniel Marks) VELVETEEN is coming on October 9th from Delacorte/Random House Childrens Books.