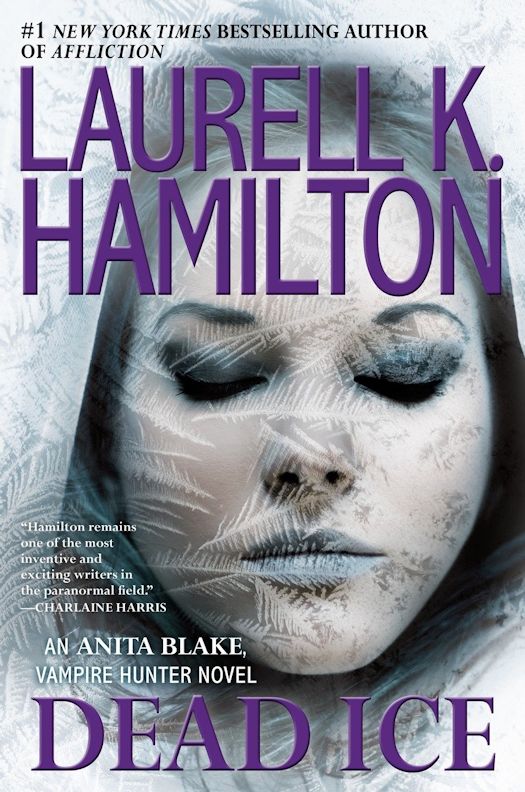 Anita Blake has the highest kill count of any vampire executioner in the country. She’s a U.S. Marshal who can raise zombies with the best of them. But ever since she and master vampire Jean-Claude went public with their engagement, all she is to anyone and everyone is Jean-Claude’s fiancée.

It’s wreaking havoc with her reputation as a hard ass—to some extent. Luckily, in professional circles, she’s still the go-to expert for zombie issues. And right now, the FBI is having one hell of a zombie issue.

It’s the sort of case that can leave a mark on a person. And Anita’s own soul may not survive unscathed . . .

Laurell K. Hamilton has been writing since the early 1980s, and Dead Ice is her twenty-fourth novel about Anita Blake, Vampire Hunter. During these years, Anita has evolved from a fairly uptight young woman to someone who is involved in polyamory, intimate relationships with more than one other person. Some reviewers feel that since Hamilton started adding this element to her novels, they have become little more than erotica. However, Hamilton was one of the pioneers to combine mystery with the supernatural, and for years, I struggled to find her novels in the stacks as Horror, Mystery, or Fantasy, before someone developed the Urban Fantasy genre.

At the same time, on the home front, Anita has agreed to marry Jean-Claude, the master vampire of America, and hold a commitment ceremony with at least two of her other lovers, Nathaniel and Micah. However, in the shapeshifter community, there is a prophecy that in order to keep Marmee Darkness dead, Anita must enter into a relationship with one of the tiger shifters. Lastly, Asher continues to make trouble with his lovers and negotiates a relationship that threatens the hyena shifter politics.

Hamilton does a good job portraying some of the more mundane aspects of polyamory -- communication. Everyone involved in the relationship must negotiate and discuss every aspect of adding or deleting someone from the roster. Anita proves that it is a balancing act, and her feeling that she may be torn too much among too many seems a legitimate response for someone with this lifestyle. In addition, Hamilton discusses some of the intimate details of BDSM (bondage, dominance, submission, and roleplaying). As she did with all elements of her novels, she researched the lifestyle extensively before trying to write about it, and it appears that she has done her homework.

I would not recommend this novel (or indeed, any of the novels after Obsidian Butterfly) for anyone under the age of 16, because the sexual scenes in the book are fairly explicit for someone younger. However, I would recommend this series for anyone who is interested in equality, because Hamilton does well portraying individuals from all walks of life – bisexual, polyamorous, sociopathic, etc.

While I feel the relationship aspect was balanced with the mystery, I did think the mystery was solved a little abruptly, although I did see the foreshadowing from the beginning. While some might complain about the relationship aspect of the series, I appreciate it because I feel it more fully depicts Anita as a well-rounded human. I appreciate that she has evolved and grown over twenty-four years. While I sometimes have difficulty remembering the difference between Dev and Demon, it makes me sympathize with an individual who must have sex to feed a certain supernatural need. I still look forward to a new Anita Blake novel whenever they are published.
Source: qwillery.blogspot.com
0 Comments+ Sharelabels (7)Flag
AllAnita BlakeBerkleyBook ReviewsDead IceDoreenLaurell K. Hamiltonreview