The Qwillery | category: Guardians of Eternity

Published:
Please welcome Alexandra Ivy to The Qwillery's as part of the Authors After Dark Author Spotlight Interviews.

Alexandra:  I actually came to writing from my love for theatre. I’ve always been a huge reader, but when I was younger I hoped to work on stage. After taking a playwriting class I realized I actually preferred to create my own characters rather than mimicking someone else’s. I worked on a play (that I would still love to finish), but my heart has always belonged to romance, so I swiftly turned my efforts to novels.

Alexandra:  I have a very vivid idea for each scene and it runs through my mind like a movie clip, but getting it from my head and onto the paper into words that capture my idea is always tough. I also have a habit of changing my mind about the ending of the story about three quarters of the way through a book, so I have to go back through and make sure it all makes sense :-)  The one thing that’s never tough is getting new ideas. I only wish I had more time!

Alexandra:  I know it’s cliché, but hitting the New Times bestseller list will always be one of my greatest moments. It took me years to finally get published and even after I had several books in print I still felt like a fraud :-) As if someone might suddenly realize that I shouldn’t be published. So hitting the list felt like a confirmation that it hadn’t all been some huge mistake!

Alexandra:  That I write my books in play format…which means that I write all the dialogue first with a few stage directions. I don’t know if it’s because I started writing plays first, but it’s the way I make sure that the characters always move the story forward and don’t become overwhelmed by the details and descriptions.

Alexandra:  My next book in the Guardians of Eternity series will be FEAR THE DARKNESS in Sept. This is Caine and Cassie’s story and for those who’ve followed the series it has a HUGE turning point!! After that will be Santiago and Nefri’s story (June 2013).

Kensington is also reprinting my vampire trilogy that I wrote under the name Debbie Raleigh. The Immortal Rogues, starting with MY LORD VAMPIRE (Feb. 28th) are regency historicals that are set in the early 1800s London England. They’re ‘sweeter’ than my current series (less sex and violence :-) ) but I do have a character in my current series that makes an appearance in my earlier books. It’s soooo much fun to write about immortals!

Alexandra:  Thanks so much for inviting me!! 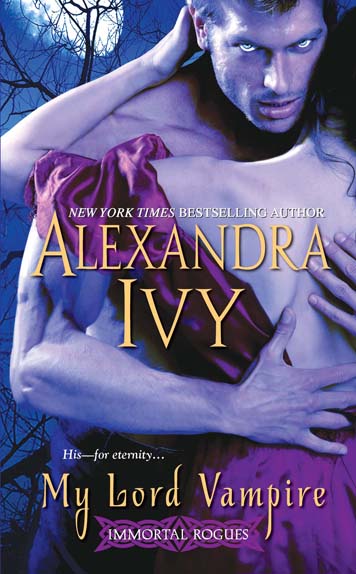 In the first of a mesmerizing trilogy, Alexandra Ivy, author of the Guardians of Eternity series, introduces the Immortal Rogues—three vampires duty-bound to protect their own kind even as they fall prey to mortal desires…

Centuries have passed since Gideon Ravel dwelled among humans. Now he must infiltrate the cream of London society to earn the trust of one woman. Simone, Lady Gilbert, possesses an amulet of unimaginable power, and no concept of the threat that surrounds her. The ton’s gossip prepared him for her beauty and wit. But he is blindsided by her barely disguised sensuality and his growing need to possess her...

None of the idle aristocrats who vie for Simone’s attentions know about her past. To them, she is the sophisticated, worldly widow known as the “Wicked Temptress.” The truth would ruin her, and she has never been tempted to reveal it until now. Yet beneath Gideon’s bold, black-eyed stare is a hunger that demands satisfaction and complete surrender…and a secret far more dangerous than her own… 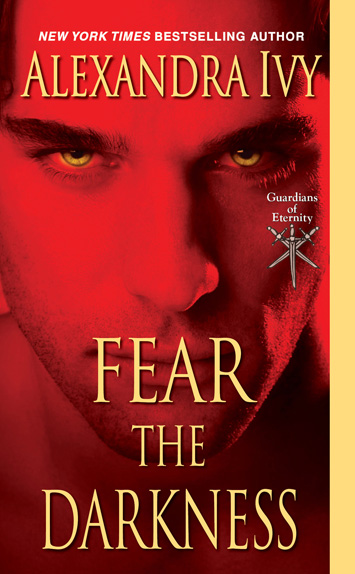 The Guardians of Eternity are embroiled in an epic battle for survival. They are as dangerous as they are sensual—and their lustful appetites are legendary…

Her Visions Lead Her To Danger

Beautiful Cassandra is a Were, a prophet both vulnerable and defiant, blessed with visions that portend the fate of the world. A rare and delicate creature, Cassie must be protected at all costs. Enter Caine, a powerful cur turned pureblooded Were whose recent tangles with a demon lord have left him in serious need of redemption. Caine is duty-bound to keep Cassie out of danger—and that means resisting his potent urge to seduce her…

And Only He Can Save Her

As Cassie’s mysterious visions lead them in and out of danger, Caine believes he has found his true mate, the woman with whom he is bound for all eternity. Cassie is both charmed and frightened by Caine’s magnetism, and unsure if he—or her feelings for him—can be trusted. But Cassie can’t afford to doubt Caine now. A deadly enemy bent on destruction is closer than they realize—and only they can keep chaos from ruling the world… 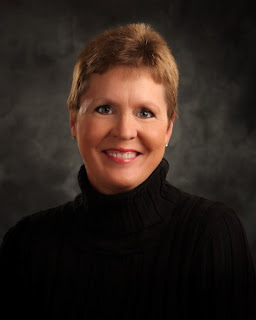 Alexandra Ivy is the author of the highly acclaimed Guardians of Eternity. Her books have regularly hit the USA Today and New York Times bestseller lists along with Publisher Weekly. The next book in her series, FEAR THE DARKNESS, will be released September 2012. She has also written historicals under the pseudonyms Debbie Raleigh and Deborah Raleigh.

Alexandra graduated from Truman University with a degree in theatre before deciding she preferred to bring her characters to life on paper rather than stage. She currently lives in Missouri with her extraordinarily patient husband and sons.

What:  One commenter will win a copy of My Lord Vampire (Immortal Rogues 1) from The Qwillery.

If you are immortal, when were you created or born?
Please remember - if you don't answer the question your entry will not be counted.

Who and When:  The contest is open to all humans on the planet earth with a mailing address. Contest ends at 11:59pm US Eastern Time on Wednesday, May 23, 2012. Void where prohibited by law. No purchase necessary. You must be 18 years old or older to enter.