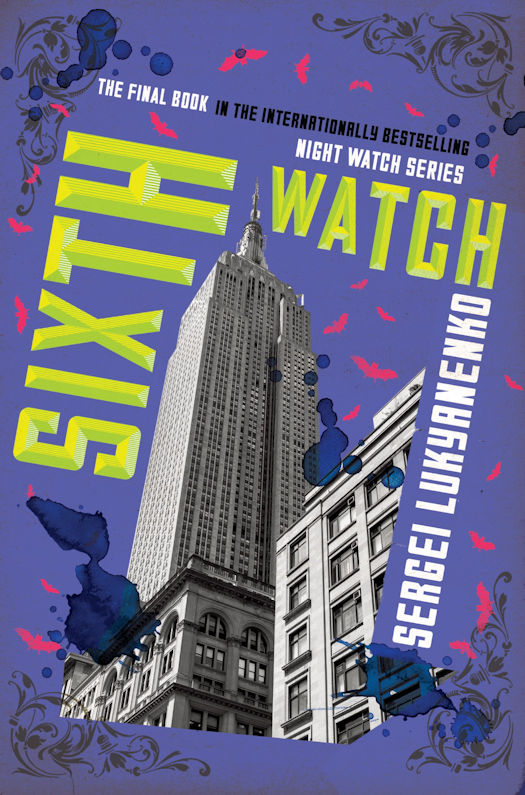 They live among us. They fight among us. They’re the Others, a supernatural race of magicians, shape-shifters, vampires, and healers. Divided into the Light and the Dark, these rival factions have spent a millennium under a reluctant truce. Now, however, both sides must unite against the ultimate enemy.

A Light magician and high-ranking member of the Night Watch, Anton Gorodetsky fears nothing. But lately the threats are mounting. A reincarnated vampire has been terrorizing Moscow. His daughter’s school is ambushed by a bizarre chimera. And the Prophets have all reached the same chilling conclusion: The world will end in five days’ time.

To ward off the apocalypse, an ancient council called the Sixth Watch must be assembled. After both Light and Darkness select their emissaries, Anton must enlist the unwilling aid of the four other Great Parties: the Vampires, the Witches, the Form-Takers, and the enigmatic Foundation. Journeying from Russia to Paris, the Alps, and New York City, Anton comes in peace—but he is prepared for war. For if he fails, none are safe.

I have been wanting to read the Night Watch series by Sergei Lukyanenko for some time. Receiving a review copy of the sixth novel in the series motivated me to start reading. I'm so glad that I did. The Night Watch series is fabulous. Lukyanenko has created a unique and detailed mythology for his novels. The focus of the series is Anton Gorodetsky, an Other, a member of the Night Watch and Light magician. There are those on the Dark side, but that all become clear when you read any of the novels. However, you do not have to read any of the prior novels to understand the last novel, Sixth Watch. Lukyanenko does a wonderful job filling in any information you might need in a way that is organic to the story.

In Sixth Watch, Anton must solve the most difficult case of his life and save the Others and humans and animals from extinction. He has more personally at stake than ever before. Much of the novel is spent with Anton working to figure out what the Sixth Watch is and who should be its members. This is not easy and he does not have to do it alone as the resources of both the Light and Dark Watches are at his disposal. There are tremendous roadblocks. At the same time he is fighting to keep his wife, daughter and himself alive. They are subject to horrific attacks.

Sixth Watch is riveting, exciting and vibrant. There is so much action. Characters from prior stories appear, threads are woven together, and secrets are revealed. In the midst of all the research and the battles there are moments of philosophy - about good and evil in particular. This gives wonderful depth to Sixth Watch (and you will find this in all the novels in the series). Anton Gorodetsky, the Others and people you get to know well in Sixth Watch are all fully developed and pivotal to the story. The ending of Sixth Watch is unexpected. In retrospect it is exactly what had to happen. What a way to end the series and the story of the Day Watch, the Night Watch and Anton Gorodetsky! This is a series I will read again and again.


Kudos to the translator, Andrew Bromfield, who has beautifully translated all the Night Watch novels.

Long out of print, THE CLOCKWORK GIRL, was originally released in five illustrated stories and sold more than 340,000 copies worldwide. The full story of THE CLOCKWORK GIRL (Harper Design//On Sale:July 12, 2011//ISBN:9780062080394) comes to life again in this beautifully illustrated graphic novel with a new forward from the original authors, Sean Patrick O'Reilly and Kevin Hanna, along with playful, full-page pin-ups of the characters.

The story takes place in a whimsical land far, far away where inventors compete to show off their latest trinkets and inventions at the local fair. A mad scientist, determined to win the top prize at the fair, creates a robot Clockwork Girl. Against all odds, she finds love and companionship in Huxley, the amazing mutant circus boy. Despite the threats of their warring families, they begin to explore the world together and discover what it means to be human—to move, to think, and ultimately, to love.

THE CLOCKWORK GIRL has won the Moonbeam Award, as well as the Graphic Novel of the Year Award at Book Expo America by ForeWord magazine.

This fall, THE CLOCKWORK GIRL will be released a a 3-D luximation animated film, voiced by a "dream team" of talents, including Carrie Ann Moss (Matrix), Jeffrey Tambor (Arrested Development), Alexa Vega (Spy Kids), Jesse McCartney (Horton Hears a Who) and Brad Garrett (Everybody Loves Raymond). An exciting sneak peek teaser is available online at http://www.theclockworkgirl.com. 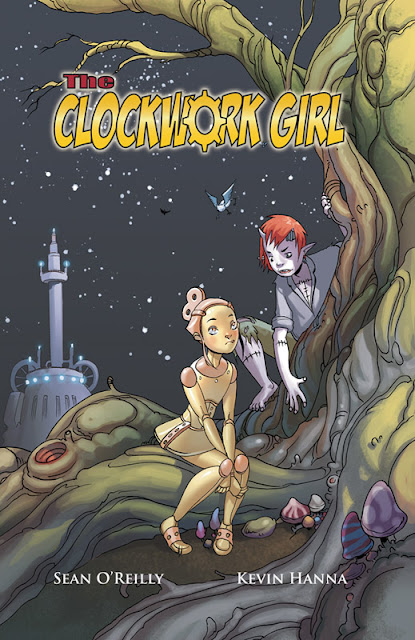