Published:
Harrison Geillor is at it again with a new mash-up that will be published by Night Shade Books in October 2011: The Twilight of Lake Woebeggotten. 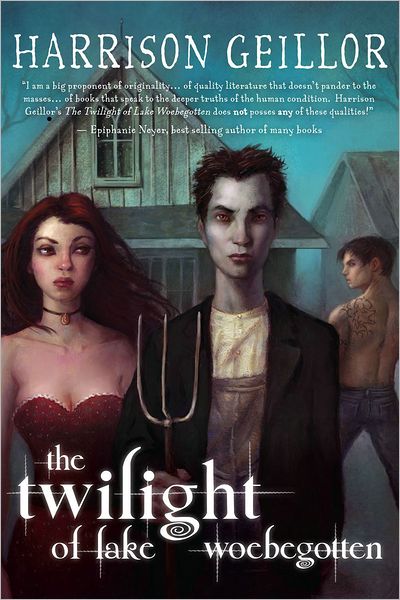 A small town... a plucky heroine, a shiny vampire, and a hunkey Native American rival with a secret. But all is not as it seems in Lake Woebegotten. Let Harrison Geillor reveal what lies beneath the seemingly placid surface. You'll Laugh. We promise.
When Bonnie Grayduck relocates from sunny Santa Cruz California to the small town of Lake Woebegotten, Minnesota, to live with her estranged father, chief of the local two-man police department, she thinks she's leaving her troubles behind. But she soon becomes fascinated by another student -- the brooding, beautiful Edwin Scullen, whose reclusive family hides a terrible secret. (Psst: they're actually vampires. But they're the kind who don't eat people, so it's okay.) Once Bonnie realizes what her new lover really is, she isn't afraid. Instead, she sees potential. Because while Bonnie seems to her friends and family to be an ordinary, slightly clumsy, easily-distracted girl, she's really manipulative, calculating, power hungry, and not above committing murder to get her way -- or even just to amuse herself. This is a love story about monsters... but the vampire isn't the monster.