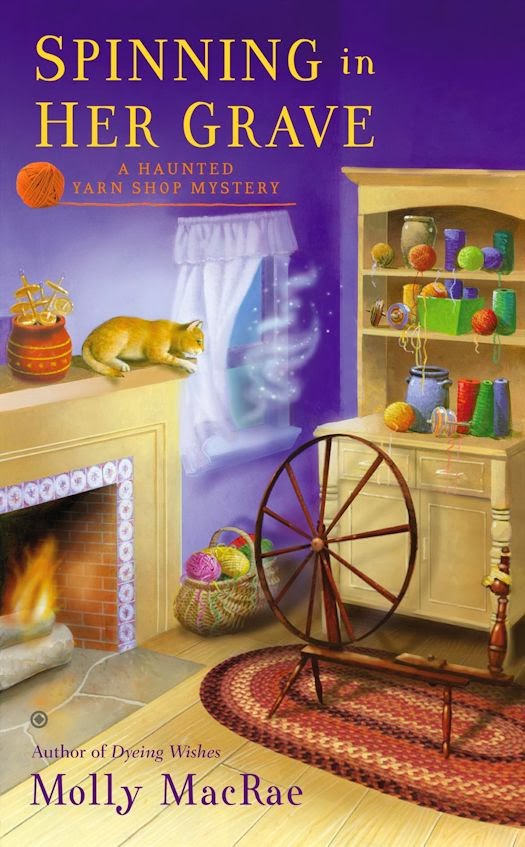 Kath is a strong character. She trusts her instincts, helps people, and tells it like she sees it. I love that! Kath is so awesome (to me) that she even calls the annoying local police officer “Clod” instead of his name. She has some good zingers in the book that kept me laughing. Kath investigates with the help of her knitting group which is, no lie, called the Fast and Furious Knitters. The yarn club she runs out of the shop is TGIF…Thank Goodness It’s Fiber. I’m all for corny references, they make me smile. I like the town the story takes place in and Kath’s friends. Kath has a cat but he isn’t funny like some of the other cozy mystery pets I’ve encountered recently. Is this series worth continuing? Reading the first two? Yes! The yarn club gets into all types of shenanigans and I really want to find out about Geneva…how did she die and why is she haunting the yarn shop? I hope to find out soon!
Source: qwillery.blogspot.com
1 Comments+ Sharelabels (6)Flag
AllBook ReviewsHaunted Yarn Shop MysteriesMolly MacRaeSignetSpinning in Her Gravereview

Published:
Please welcome Molly MacRae to The Qwillery. Molly's most recent novel is Spinning in Her Grave (Haunted Yarn Shop Mystery 3) which will be published on March 4th by Signet. 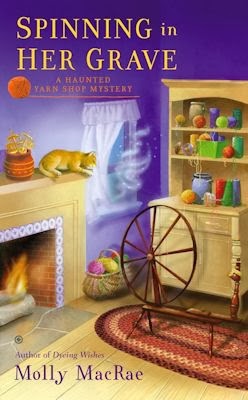 What’s it like to write a mystery series set in a small town? It’s like having the coolest set of blocks to play with that you can imagine—complete with action figures and accessories!

For my Haunted Yarn Shop Mysteries, I took my blocks and built Blue Plum, Tennessee, borrowing the best parts of my favorite small towns for inspiration. The streets crisscross a creek (with fish) that meanders through town. The courthouse is there, and the library (with real books,) and if my action figures get hungry they can stop by Mel’s on Main, the best café in town (with real pastries in the bakery case—that you can smell!) And then, of course, there’s the fiber and fabric shop called the Weaver’s Cat. It’s in a three-story, antebellum brick row house and it comes with gorgeous yarns, flosses, quilting fabric, needles, notions, spinning, dying, and weaving supplies, and a window seat in the study up in the attic. And I get to play with all of it!

Kath Rutledge is the main action figure for the series. She’s new in Blue Plum, but getting settled, and she’s playing nicely with her friends. There’s Ardis, her shop manager; Mel, who owns the café; Thea, the librarian; Joe, the fisherman; Joe’s brother Clod, the sheriff’s deputy; Argyle the cat; and Geneva the ghost. Each of their mystery stories comes with an Action Figure & Accessories bonus pack, too. For Spinning in Her Grave, their latest adventure, the bonus pack includes a baker, a piano salesman, working spinning wheels, a bass boat, and a piglet that really squeals.

In this story, everyone is getting ready for the annual heritage festival called Blue Plum Preserves. Oh—and the bonus pack also includes pavilion tents, a music stage to set up on the courthouse steps, banjos, a high wheel bicycle, and antique rifles. Fun! (Although the rifles are a little disturbing.)

This business of writing a small town mystery takes a love for micro-scale world building and playing with dolls. It takes a love for something else, too—something related to the love for driving little cars around the streets and creating window displays at the Weaver’s Cat. But this goes beyond a love for picking paint for other people’s kitchens or dressing some of the action figures with questionable taste. A key part of writing mysteries is a love for meddling in other peoples’ lives.

I set Blue Plum up so that it’s just right—add trees, porch swings, a festival on a pretty summer weekend where people are having a good time—and then I start tinkering, tweaking, and tossing problems at them. What if the piano salesman is directing a piece of street theater involving guns? What if he approaches Kath and asks if one of his actors can hide in the Weaver’s Cat and shoot blank rounds from a second-story window? What if she says no, but someone does it anyway, the rounds aren’t blank, and the baker dies? What if Clod, the sheriff’s deputy, still thinks Kath might be interested in him? What if Geneva, the ghost, discovers she’s afraid of ghosts? Do you see what I mean? Why can’t I leave these poor people alone?

People might assume, after reading Spinning in Her Grave, or the first two books in the series, that I spin, dye, weave, or knit regularly and well. Especially knit, because the action figures belonging to TGIF (Thank Goodness It’s Fiber) challenged themselves to knit 1,000 baby hats by the end of the year and they’re always talking about self-striping yarn and other knitter stuff. I do knit, in a rudimentary way, and I’ve done a bit of weaving, spinning, and dyeing. But what I really like to do with knitting needles (or spindles or shuttles or crochet hooks) is poke around in the lives of my action figures, gum up the works, and see what happens. I’m not mean, though, except for killing one or two people in each book. These are cozy mysteries, after all, and I care about my action figures. Even the poor things who do end up dead—bless their hearts.

So, what’s it like to write a mystery series set in a small town? For me, it’s a great way to knit (or spin, weave, or dye) vicariously. It’s a way to indulge my meddling gene safely. And it’s just plain fun. 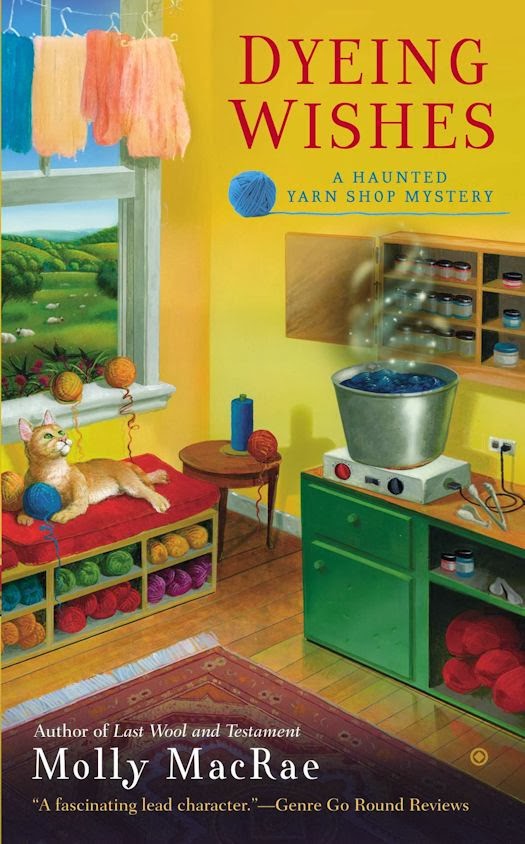 Kath Rutledge’s grandmother left her a charming fiber and fabric shop, a close-knit group of needlework lovers, and a television-addicted ghost in the attic. She may also have inherited the special skills required to untangle a murder.

Always up for trying something new, Kath and her friends from the fiber and needlework group TGIF—Thank Goodness it’s Fiber—are visiting Cloud Hollow Farm for the day to learn the fine art of dyeing. With spring in the air, the friends head out to greet the sheep. But the sheep are more interested in something else—two bodies spread under a tall tree. And one of those bodies is someone they know.

Kath’s friends nudge her to investigate, and no one is more adamant than Geneva, the ghost who loves to play assistant sleuth. But when Kath discovers another murder cut from the same cloth, she’s more determined than ever to hang a roving killer out to dry… 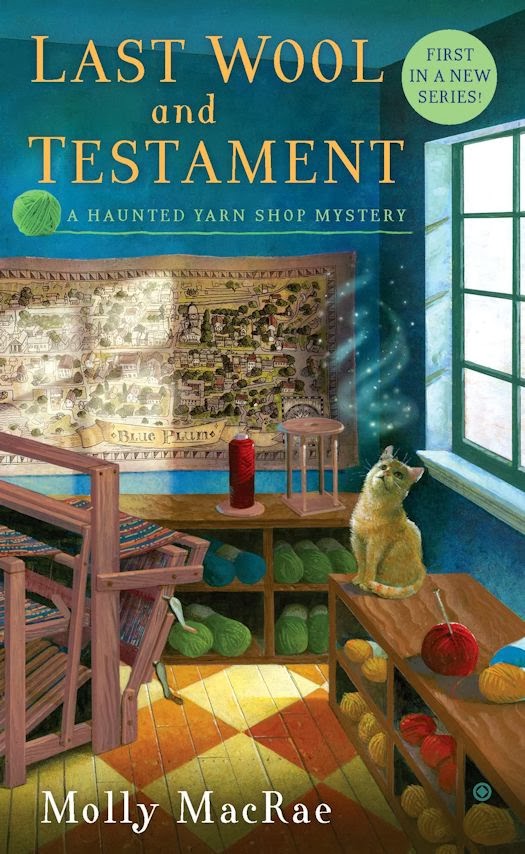 Kath Rutledge is about to learn the true meaning of TGIF—Thank Goodness It’s Fiber.…

That’s the name of the spunky group of fiber and needlework artists founded by Ivy McClellan, Kath’s beloved grandmother. Though Ivy has recently passed on, the members still meet regularly at her fiber and fabric shop, The Weaver’s Cat, which Kath has now inherited. But that’s only the first in a series of surprises when Kath returns to the small town of Blue Plum, Tennessee, to settle her grandmother’s affairs.

There’s been a murder, and it turns out her grandmother was the prime suspect. Before she can begin to clear Ivy’s name, Kath encounters a looming presence in the form of a gloomy ghost. It turns out the specter has just as much interest in solving the murder as Kath. So, with a little help from the members of TGIF—and a stubborn spirit from beyond—she sets out to unravel the clues and hook the real killer.… 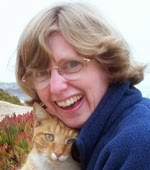 Molly MacRae spent twenty years in the foothills of the Blue Ridge Mountains of Upper East Tennessee, where she managed The Book Place, an independent bookstore; may it rest in peace. Before the lure of books hooked her, she was curator of the history museum in Jonesborough, Tennessee’s oldest town.

MacRae lives with her family in Champaign, Illinois, where she connects children with books at the public library.