Since my last post I have had the COOLEST experience EVER!!  It wasn't book related but I thought you might be interested anyway.  What did I do and what did I read afterwards? 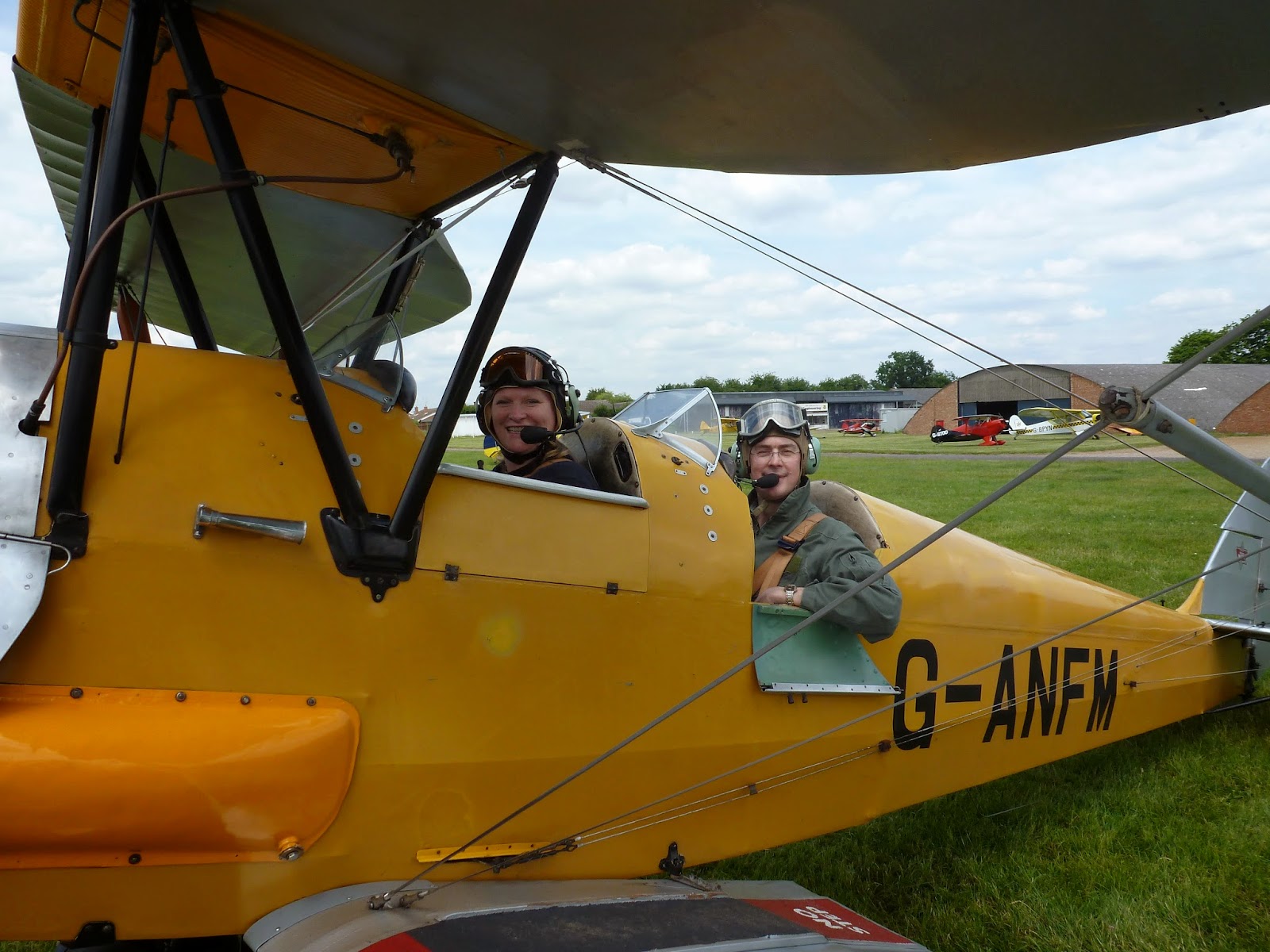 Check me out! I flew in a Tiger Moth plane which was piloted by one of the Hubinator's friends. It was a lot of fun and we did loop de loops and barrel rolls. I didn't fly it but could have if I wanted to...or was crazy enough too. Unfortunately, we encountered some major train delays on our way to the air field so it gave me a chance to finish Parasite by Mira Grant. I enjoyed this first instalment of the Parasitology series maybe not as much as I loved the Newflesh series but I did like it. I thought the concept of having a big fat tape worm living inside you keeping you healthy was a good one. This series also features drug companies and health authorities as the ultimate bad guys with the ability to commit murder under the facade of improving society. I did guess what was going to happen but the journey that Grant took the characters on was engaging nonetheless. This is shaping up to be a great series and just needs a little more development of the lead character Sally and it will be close to being excellent.

I needed a bit of light entertainment after Parasite so I turned to my TBR and found a book I bought months ago and had never read - The Case of the Pitcher's Pendant by Tee Morris. This is the second and I believe final book of the Billibub Baddings series. I donated to Morris's Kickstarter campaign for a third book but unfortunately, it didn't meet the right level of funding and was withdrawn. In case you don't know Billi is a dwarf detective and I don't mean just a small man....he is an actual dwarf who ended up in our world during a battle and uses his 'otherworldly' skills to start his own detective agency. I will admit I don't really remember what year The Case of the Singing Sword  (the first book) is set but book 2 starts after the stock market crash in 1929 and Billi's finances take a plummet along with stock market. He finds that his livelihood relies on his acting abilities rather than his detecting skills but he jumps at the chance when offered a case that involves one of his favourite past times - baseball. The new team in town look too good to be true and Billi sniffs out not just trouble but black magic. Billi needs to hit the detective's version of a home run before anyone else dies.

I didn't think book 2 was quite as amusing at book 1 but it was still a good murder mystery. Billi is a great character who has learn to make the most of his new life and uses his diminutive size to his advantage. Al Capone, baseball and a dwarf with lots of moxy....The Case of the Pitchers Pendant has it all.

I am determined to tidy up by TBR and to looked for another book I have had for awhile. I came across He Said, Sidhe Said by Tanya Huff. Normally, I don't like short stories but when it comes to Tanya Huff I was willing to risk it. I really enjoyed this book especially the stories about the Brownies entitled Tuesday Evenings, Six Thirty to Seven - hilarious. Each story is prefaced with a paragraph or two from Huff explaining why she wrote the story and each one is very different. Even if you aren't a fan of short stories this book has a lot to offer.

I am ending my weekend by starting Digital Wolf by Jon Rosenberg and will tell you all about it next week. Until then Happy Reading.