Published:
Please welcome Annette Marie to The Qwillery. Immortal Fire, the 3rd novel in the Red Winter Trilogy, was published on April 11th. 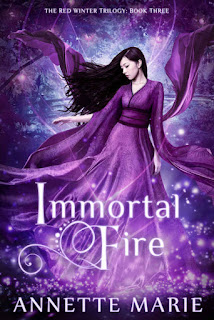 Words are an author’s paintbrush. We create vibrant, moving pictures with black and white sentences, and if we do it right, the reader gets to watch a little movie in their head while they read. That’s my goal, anyway. I’m a very visual writer; I “see” everything I write and do my best to make sure the reader sees it too.

But what happens when you actually add some art to the book?

Illustrated novels aren’t a new thing, but they aren’t common in modern contemporary fantasy. For my most recent trilogy Red Winter, I knew very early on that I wanted to include illustrations in each book. Heavily inspired by Japanese mythology, the story is a visual feast and I wanted readers to see the story in a more tangible way that I could create with words alone.

So began my search for an illustrator. That task seemed impossible in itself—not only finding an artist with a style that meshed with the story, but finding someone who would really understand what I wanted. I lucked out with Brittany Jackson of BeaGifted Illustrations. She’s amazingly talented, and she captured so much beauty, story, and character in every illustration.

Once she signed on, I thought the hard part was over, and in a way, it was. But in a completely different way, the trial was only just beginning for me. My world and characters exist in my head, and I can only tell their story in words. Now I was handing my precious creations over to someone else to give them visual life. Like most authors, I can be a little (a lot) possessive of my characters, and sharing them with another artist was unexpectedly challenging.

At some points, I can honestly say it was like magic. Brittany seemed to pluck my characters straight from my muse and paint them beautifully, depicting them even more perfectly than I could have imagined. Some of the illustrations even shifted my perception of the characters, and suddenly I could see something more in them I hadn’t known was there—a slightly different facet of their personality, an emotion I hadn’t expected.

At other points, though, I’m pretty sure Brittany wanted to strangle me. And I probably would have deserved it, but she was astoundingly patient and never once made me feel bad when I got hung up on stupid small details because “that’s how I imagined it in my head.”

But when it comes down to it, no matter how carefully I describe something, no two readers are going to “see” that scene or character in exactly the same way. No two readers will experience the story in the same way—or in the precise way I intended it.

But in Red Winter, I know we all—author and readers—can share the exact same experience of each scene that Brittany brought to life with an illustration. They’re my favorite scenes, every one, and even if the process was hard on my poor control-freak brain, I would do it all over again a hundred times to get to see my characters inside the pages of their books in a way I’d never experienced before. 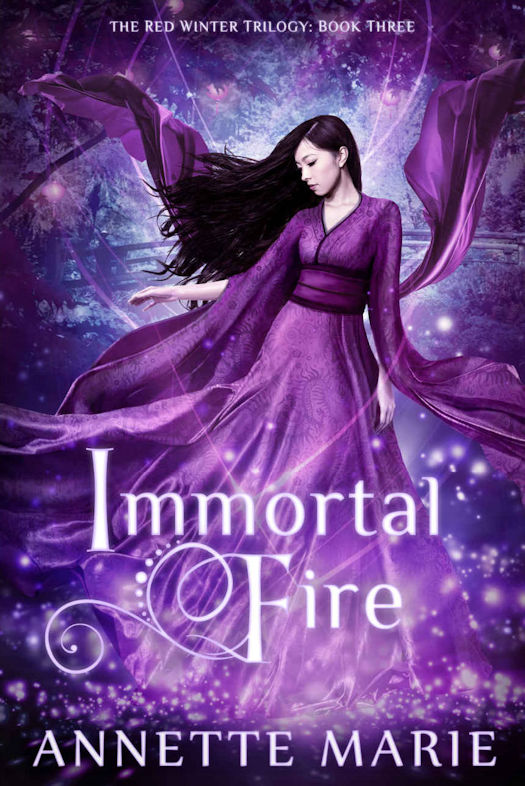 Once, Emi believed the heavenly gods were righteous and wise, while the earthly yokai spirits were bloodthirsty and evil. But with a traitorous deity poised to destroy her world, and the yokai standing as humanity's only defense, the lies of her upbringing have toppled to reveal a far more terrifying reality.

Despite the looming threat, Emi can't escape her greatest distraction: Shiro, the fox yokai who has so deftly claimed her heart for his own. Soon—too soon—she will have to break the curse that binds his magic and memories. And once the ancient power inside him awakens, the yokai she loves will be changed forever.

As the earthly gods gather to wage war against the heavens, Emi and Shiro must gamble everything to turn the tide against their immortal, all-powerful foes. Together, they will find a way to save her world—even if it means losing each other.

Violent shivers pulled Emi from the depths of sleep. The chill in the room cut right through the layers of blanket and kimono, and her toes ached from the cold. Curled in a tight ball beneath her blankets, she exhaled harshly, half expecting her breath to fog the air.

Beyond the thin partition that separated her sleeping quarters from the rest of the room, the windows rattled in a fierce wind. A winter storm? A feverish ache throbbed in her muscles, though she didn’t think she had slept for more than a few hours.

Yawning, she forced her tired body off the futon. Cold hit her like a splash of frigid water but even that wasn’t enough to dispel her drowsy daze. A short, fumbling search uncovered no extra blankets in the closet within her small alcove. Wrapping an arm around herself for warmth, she slid a panel open and peeked into the main room.

The remains of Shiro and Yumei’s late dinner had been cleared from the table, and the unlit brazier was devoid of light or warmth. Across the room, a second futon had been laid out near Shiro’s, and dark shapes filled both.

Trust the yokai to sleep right through the freezing cold. Behind their futons was a larger closet where bedding was stored. Surely there would be an extra blanket in there. She stumbled toward it in exhaustion. Her chest felt hollow and empty, and some of the chill that plagued her emanated from within.

As she crossed the room, an icy breeze rushed across her. Jerking back a step, she turned toward the sliding garden doors. A six-inch gap revealed the night-swathed garden beyond, where snow flew almost horizontally in the wind.

Why on earth had they left the door open? With a tired scowl, she yanked it shut. The room immediately felt warmer. Shaking her head, she stopped at the foot of Shiro’s futon, the light from the window glimmering on his white hair. Not that long ago, she had woken him from a nightmare, and he had thrown her into a wall before rousing enough to realize he was about to rip her throat out. Attempting to sneak between their futons to reach the closet was probably unwise.

“Shiro?” she whispered. “Are you awake?”

He didn’t stir. Neither did Yumei, who slept on his back with his head turned away, his hair splayed untidily across his face in a way that was very unlike the usually reserved yokai. He rarely slept when anyone else was nearby, at least as far as she’d seen. Maybe her ki had tired him.

When he again didn’t move, not even a twitch of his ears, a nervous prickle climbed her spine. Shiro wasn’t that deep of a sleeper. And why hadn’t her clumsy banging of the garden door woken them?

A spike of adrenaline cut through her drowsiness as she realized how unlikely it was that Shiro and Yumei would go to sleep with a door ajar. Had the wind blown it open? Or … something else?

She scoured the room, but it was clearly empty. Biting the inside of her cheek, she stepped between the futons and crouched.

No reaction. Hoping he wouldn’t attack her, she touched his shoulder. He slept on, eyes closed, face slack. Her apprehension intensified into real fear.

“Shiro!” She gripped his shoulder and shook it, but he still didn’t wake or so much as stir.

Was she dreaming? Was this a nightmare? She spun around and reached for Yumei.

“Yumei, wake up! Please wake up!” She shook him but he was as unresponsive as Shiro. In desperation, she hit his shoulder with her open palm, yelling his name. “What’s wrong with you? Wake up!”

As she turned, intending to grab a handful of snow from outside to shove in Shiro’s face, the air above him shimmered strangely. She went rigid, squinting into the darkness.

Her heart thudded in her ears. A kanashibari, the dream-weaving yokai that had been watching Emi in the bath. That was what she’d forgotten to warn Shiro about! And now it was sitting on him, and he wouldn’t wake up.

She lurched back to Yumei. A second kanashibari appeared before her, perched on his torso. The new one, another little girl with short, stringy hair and a pale kimono, looked up at Emi with empty black eyes.

The child’s lips pulled up in a rictal grin, and her tiny arm shot out.

Emi shoved the yokai away, but her hands passed right through the spectral body, feeling nothing but frosty air.

The yokai reached for her face and a small, frigid, solid palm pressed against her forehead. A wave of burning ice surged into Emi’s skull, blanketing her thoughts. Impossible, unyielding drowsiness crashed through her. 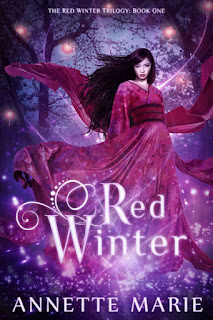 In a few short months, Emi's mortal life will end when she becomes the human host of an immortal goddess. Carefully hidden from those who would destroy her, she has prepared her mind, body, and soul to unite with the goddess—and not once has she doubted her chosen fate.

Shiro is a spirit of the earth and an enemy of the goddess Emi will soon host. Mystery shrouds his every move and his ruby eyes shine with cunning she can’t match and dares not trust. But she saved his life, and until his debt is paid, he is hers to command—whether she wants him or not.

On the day they meet, everything Emi believes comes undone, swept away like snow upon the winter wind. For the first time, she wants to change her fate—but how can she erase a destiny already wrought in stone? Against the power of the gods, Shiro is her only hope … and hope is all she has left. 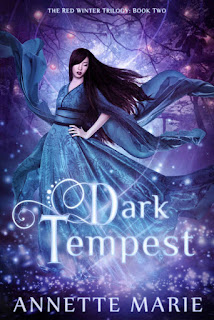 Emi has dedicated her life to becoming the perfect vessel for the goddess Amaterasu, but the insidious betrayal of another deity has changed everything. Now Amaterasu has charged Emi with an urgent mission: to find and free the earthly gods before mankind is brought to its knees beneath divine tyranny.

At her side is Shiro, the mysterious fox spirit. When she first saved his life, she could never have imagined that behind his cunning and confidence, he was lost—his power bound by a devastating curse and his memories obscured. His veiled history is somehow tied to the missing gods, but he can’t remember how or why.

As their search leads them into the murky depths of the spirit realm, the shadows of Shiro’s past begin to emerge. With each brief awakening of his true self, she loses a little more of him. The fate of the heavens and earth rest in her mortal hands, and she must find the missing gods before time runs out for her world—and for Shiro.
Amazon : Barnes and Noble : Book Depository : IndieBound 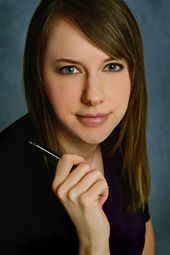 Annette Marie is the author of the Amazon best-selling Steel & Stone series, which includes Goodreads Choice Award nominee Yield the Night, and fantasy trilogy Red Winter. Her first love is fantasy, but fast-paced urban fantasy and tantalizing forbidden romances are her guilty pleasures. She lives in the frozen winter wasteland of Alberta, Canada (okay, it's not quite that bad) with her comparatively sensible husband and their furry minion of darkness—sorry, cat—Caesar. When not writing, she can be found elbow-deep in one art project or another while blissfully ignoring all adult responsibilities.