The Qwillery | category: Inherit the Stars

Interview with Tony Peak, author of Inherit the Stars 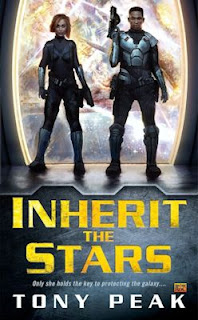 Tony:  Thanks for having me. I started writing seriously in 2008. Before that, I’d write a short piece now and then, but never with the intention of getting it published. But I wanted to give it a shot. I’d had stories in my head for years, and I knew they would never see the light of day unless I took that first step. So I made myself write one short story per week, and that helped me build discipline. In a short time, I couldn’t stop myself from writing, even if I had wanted to. Finally, I wrote my first novel in 2010. Inherit the Stars in the fourth, written in early 2011.

Tony:  Panster all the way! For novels, I create a short overview with character sketches, then I dive right in, writing every day until that first draft is complete. At that point, the overview usually goes out the window, but the scenes that come out of me feel more genuine through this process.

Tony:  Not having enough time to write all the things that I want. I’ve come to love the writing process—even revisions. Rejections are nothing but a reminder that I can do better.

Tony:  Frank Herbert for his immersive Dune universe, Robert E. Howard for his gritty energy, Ursula K. Le Guin for turning social preconceptions on their head, and Philip K. Dick for his mind-bending narratives. Some of my favorite books are Dune, Ubik, Dracula, The Stars My Destination, 2001: A Space Odyssey, The Anubis Gates, and The Left Hand of Darkness.

TQ:  Describe Inherit the Stars in 140 characters or less.

Tony:  Kivita wanted to explore the stars like her father, but what she discovers will decide the fate of a galaxy—if she survives.

TQ:  Tell us something about Inherit the Stars that is not found in the book description.

Tony:  There’s a third major character: Seul Jaah, a hardened Aldaakian soldier that believes Kivita holds the key to her people’s future. She’s a hairless albino, and tough as nails.

Tony:  I wrote Inherit the Stars because I’m fascinated by discovery, space exploration, and humanity’s relationship to the cosmos. Kivita’s awe of new planets and possibilities mirrors my own. I wanted to tell a story about humanity’s role in the universe, and what one can do to improve that. I chose an action format to heighten the drama of such revelations, because I wanted the characters to risk everything to not only protect those they love, but also to learn. Knowledge has its price.

What appeals to me about writing Science Fiction? The sheer scope and grandeur that I’m allowed to work with. The playground is the universe itself, a limitless vista that will always remain mysterious because it isn’t humanly possible to see it all. I’ve loved the genre since I saw Stars Wars at the age of five, and space travel in particular stirs my imagination the most. Plus, I like for even the strangest phenomena to have a logical purpose; I never would have told this story in a fantasy format, though I love that genre as well. I feel that, as human beings, our ability to use reason rather than superstition is what will save us from destroying ourselves, as well as catapult us to places beyond planet Earth. That is a key theme of this novel. Finally, I love diversity, and what better canvas to display that than Science Fiction? Inherit the Stars features a female protagonist that is in an interracial relationship; another character is involved in an inter-species relationship. There are beefy people from high-G worlds, slight people for low-G worlds, different dialects, different religions that try to interpret the universe’s secrets. But no matter what form the characters take, they all think, and feel. We need each other to survive the void out there, and the void inside ourselves.

Space Opera usually falls outside Hard SF, and focuses more on adventure that takes technology for granted. FTL travel is common, and in many cases, worlds that are suitable for human habitation are the norm. I tried to move away from that, by addressing—in a non-Hard SF manner—the effects of gravity on starships, passengers, and on different worlds. Most worlds in Inherit the Stars require one to wear a spacesuit due to poisonous atmospheres or radiation. I also avoided the ‘dogfights in space’ of Star Wars, and paid more attention to what would really happen if a hull is ripped open by a laser beam or missile. Bodies get sucked out into space, and wild fluctuations in pressure can rip a ship apart. But having said all of that, I wanted the novel to be a Space Opera due to Kivita’s abilities, the variety of worlds she visits, the aliens she encounters, and the romance between her and Sar, the male protagonist. I wanted adventure; I wanted desperate action scenes set against the backdrop of ancient derelicts and distant nebulas. And though I like Hard SF, it’s difficult to keep such action flowing when you have to pause and give the reader a physics lesson. In the end, it’s all about suspension of disbelief. The reader must be so absorbed with the narrative that they don’t question the fantastic technology that makes the story possible.

TQ:  What sort of research did you do for Inherit the Stars?

Tony:  I brushed up on some basic astronomy and even more basic physics, but the story required little research. I’ve written other works where I spent a great deal of time on research, so it’s something that I enjoy. But Inherit the Stars is an imaginary setting, so the real work was in developing what type of spacefaring society I wanted to present. I spent much time pondering what religions might exist within an interstellar civilization, and how languages and cultures would change over time, where it might take twenty years for ships to return to outlying worlds, isolated from the rest.

Tony:  Dunaar Thev, the villain, was the easiest one to write. He’s scheming, delusional, zealous, misogynistic, and self-righteous. He has his reasons for being that way, but that doesn’t excuse his deeds.

The hardest character to write was Kivita. She has to catch the reader’s attention and hold it, be easy to empathize with, and possess some of my own humanitarian qualities regarding justice and morality. The hardest part is her gender: I’m a guy, and I made sure to get input from women regarding her portrayal. I mention the effect of cryogenic sleep on her menstrual cycles; I note how she risks sterilizing herself due to all the radiation she’s exposed to via space travel. There’s the emotional side, too, of desiring a child with the man she loves. But even then, I’ll still never write a woman character as well as an author who is a woman. But I always wanted a female lead for this story. It just felt right.

TQ:  Which question Inherit the Stars do you wish someone would ask? Ask it and answer it!

Question: When did the earliest concepts for the story come about?

Answer: I wrote a little science fiction piece for spelling class in fifth or sixth grade. That was the first time I made up the term ‘Aldaakian Shock Trooper’, which is used in the novel. Some things just stick with you.

TQ:  Give us one or two of your favorite non-spoilery lines from Inherit the Stars.

More and more he took pieces from each world with him, to beautify the cold one he lived in.

Tony:  I’m currently working on the second and third installments that follow Inherit the Stars to complete the trilogy. I also have a neo-noir space western called Wages of Cinn that I hope to get published; its set on a far future Mars, where criminals are forced to hunt electromagnetic ghosts, which can only be seen when one takes a highly addictive drug. 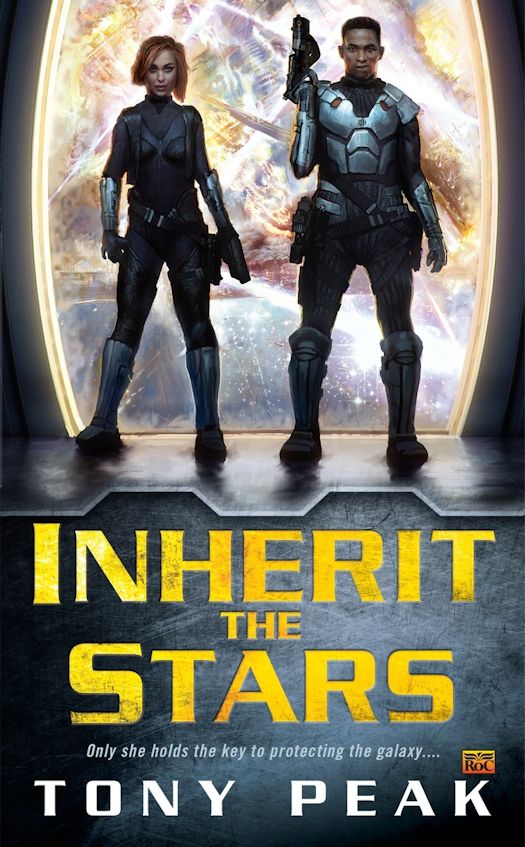 An epic debut set on the edges of space, where one botched job could mean death—or so much worse…

Wanderlust runs in Kivita Vondir’s blood. She dreamed of salvaging like her father when she was young, and now it’s her addiction, getting her through pit stops filled with cheap alcohol and cheaper companionship and distracting her from her broken heart.

Her latest contract to hunt down a fabled gemstone is exactly the kind of adventure she craves. But this job is more than meets the eye. For one thing, her duplicitous employer has hired rebel Sar Redryll—Kivita’s former lover—to stop her at any cost. For another, Kivita’s recovery of the relic unleashes in her powerful new abilities. Abilities that everyone in the Cetturo Arm—human, alien, and in-between—desperately wishes to control…

As she avoids a massive galactic manhunt, Kivita teams up with two unlikely allies: Sar and his enigmatic new partner. Only, as the gem’s mysteries are revealed and danger draws near, Kivita begins to wonder if her ex has truly changed, or if he’s just waiting for the right moment to betray her once again…

Tony Peak’s work appears in eighteen different speculative fiction publications and anthologies. He is an Active Member of the SFWA and an Affiliate Member of the HWA. He possesses a keen interest in progressive thinking, wine, history, Transhumanism, and planetary exploration. Inherit the Stars is his first novel.

An epic debut set on the edges of space, where one botched job could mean death—or so much worse…

Wanderlust runs in Kivita Vondir’s blood. She dreamed of salvaging like her father when she was young, and now it’s her addiction, getting her through pit stops filled with cheap alcohol and cheaper companionship and distracting her from her broken heart.

Her latest contract to hunt down a fabled gemstone is exactly the kind of adventure she craves. But this job is more than meets the eye. For one thing, her duplicitous employer has hired rebel Sar Redryll—Kivita’s former lover—to stop her at any cost. For another, Kivita’s recovery of the relic unleashes in her powerful new abilities. Abilities that everyone in the Cetturo Arm—human, alien, and in-between—desperately wishes to control…

As she avoids a massive galactic manhunt, Kivita teams up with two unlikely allies: Sar and his enigmatic new partner. Only, as the gem’s mysteries are revealed and danger draws near, Kivita begins to wonder if her ex has truly changed, or if he’s just waiting for the right moment to betray her once again…