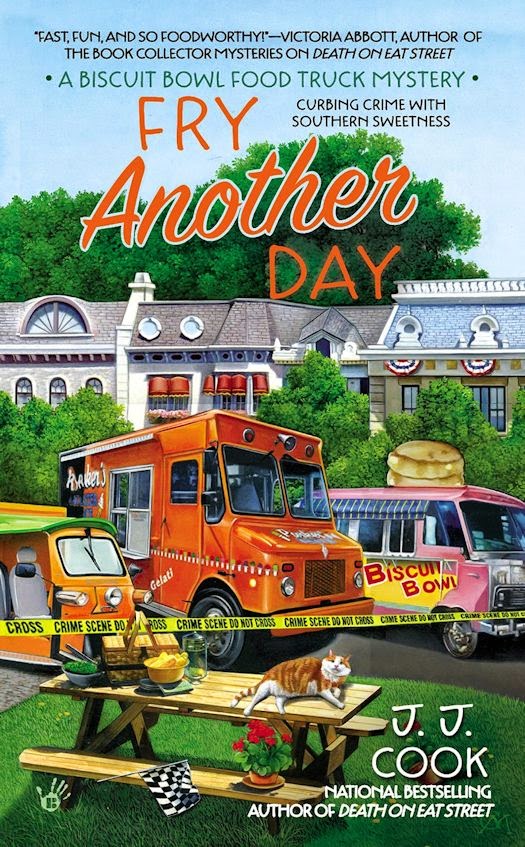 From the national bestselling author of the Sweet Pepper Fire Brigade Mysteries comes the second in a new series featuring Zoe Chase, a Southern food truck chef who serves justice on the side.

With a few loyal friends in tow—including her handsome attorney, Miguel, and her cat, Crème Brûlée—Zoe drives the Biscuit Bowl to Charlotte, North Carolina, to enter a nationally televised food truck race. The contest features challenges across the Southeast, and with a fifty-thousand-dollar grand prize, competition isn’t just fierce—it’s killer.

As everyone gears up for the first challenge, another food trucker from Zoe’s hometown is found dead. The race rolls on, but when the body count rises, police begin to suspect Miguel. Now Zoe must race to catch the killer before her attorney needs an attorney.

Fry Another Day is the second installment in the Biscuit Bowl Food Truck Mystery Series, penned by J.J. Cook. The main character of the series is Zoe Chase, an independent southern cook who is trying to make her culinary dreams come true by earning money operating a specialty food truck in her hometown of Mobile, Alabama. Zoe is making a name for herself by serving deep-fried biscuit bowls, which she invented herself and fills with sweet or savory fillings, all of which sound mouthwatering. Luckily the author includes the recipe for this delightful creation, along with some of the fillings described in the book. The story follows Zoe and her rag-tag backup crew as they drive the Biscuit Bowl food truck around the south as contestants in a televised food truck race. Things get off to a rocky start when Zoe discovers the body of a rival food truck owner, the only other participant from her hometown, whose untimely death seems to set into motion a perfect storm of murder and mayhem that follows the race all the way from North Carolina to Alabama.

This cozy mystery isn’t just about murder; there are also a series of events that occur to sabotage not only Zoe and her crew, but all of the contestants of the race, and Zoe finds herself right in the center of the chaos by finding the first body. She becomes involved with the police investigation by being in the right place at the right time to discover other abnormalities and disruptions to the race and the other food truck owners. Zoe’s innate sense of justice and curiosity lead her into becoming more involved with the happenings when her teammate and potential boyfriend, the handsome attorney Miguel, is accused of committing the various crimes. Zoe will stop at nothing to prove Miguel’s innocence, while trying to nurture their budding romance and, at the same time, win the race and the $50,000 prize.

Helping Zoe in all her endeavors are the other members of her food truck crew Ollie, Delia and Uncle Saul. Ollie is a good-hearted homeless man who has been looking out for Zoe ever since she bought the run down diner next door to a local homeless shelter. Delia is model gorgeous but down on her luck and lives with Zoe in a tiny pantry room in the diner. Uncle Saul is the original black sheep of Zoe’s wealthy family, the second one being Zoe herself. All three characters bring comedy and warmth to the storyline. Rounding out the crew is Zoe’s overly large and cantankerous cat, Crème Brulee, who is a reluctant tag-along to the race because no one else but Zoe can handle his quirks. Zoe is strong and passionate about her dreams, she is still uncertain of where those dreams will lead her, but is staunchly committed to seeing things through to the end. She’s had an interest in Miguel since they met in the first novel and he is definitely interested in her, but his tragic past has been holding him back. There are a host of supporting characters surrounding the food truck race, none have much depth, but they don’t need to, many are there strictly to further the storyline in this installment.

The plot line takes a few turns, but overall the mystery was a little predictable. Predictability can be off putting if the story itself is weak, but that is not the case with this novel. The characters, even the supporting ones, are amusing and are often so loveable that you want to get to the end just to see where their personal stories go. I am looking forward to the next installment of this series as it looks like the Biscuit Bowl crew will be heading to Mardi Gras, which leaves all sorts of possibilities for pandemonium and hilarity.
Source: qwillery.blogspot.com
0 Comments+ Sharelabels (7)Flag
AllBerkleyBiscuit Bowl Food Truck MysteryBook ReviewsFry Another DayJ. J. CookJenniferreview