Published:
It's been quite some time since I've had the pleasure of writing a Mash Ups and More Update. Believe me, I keep looking. Oliver Twisted was published by the Electric Monkey imprint of Egmont UK. Check out the Oliver Twisted website. I've no idea weather is will be published in the US as well, but I will certainly check. 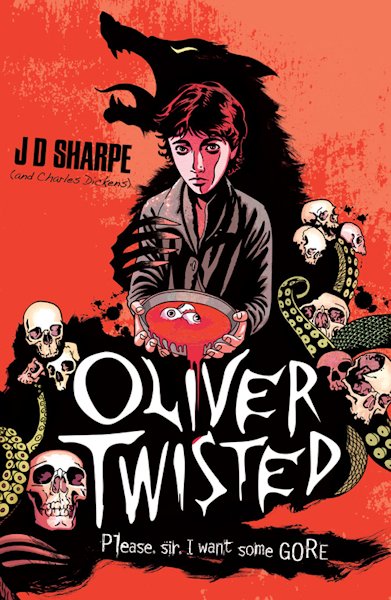 "FLESH," the woe-begotten moaned at Oliver, baring teeth which were ragged and black. "FLESH" came another moan, and he turned to see two more behind. They began to shuffle towards him, barefoot.

The world according to Oliver Twisted is simple. Vampyres feed on the defenceless, orphans are sacrificed to hungry gods and if a woe-begotten catches your scent it will hunt you for ever.

On the advice of a corpse, Oliver flees his ghastly orphan life to seek his destiny in the dark streets of old London Town, despite the perils of the woe-begotten zombie-infested journey. There he meets the shadowy Dodger, the evil old soul-stealer Fagin, and the menacing Bill Sikes, who is more beast than man. But will Oliver Twisted be the world's salvation, or its downfall?!