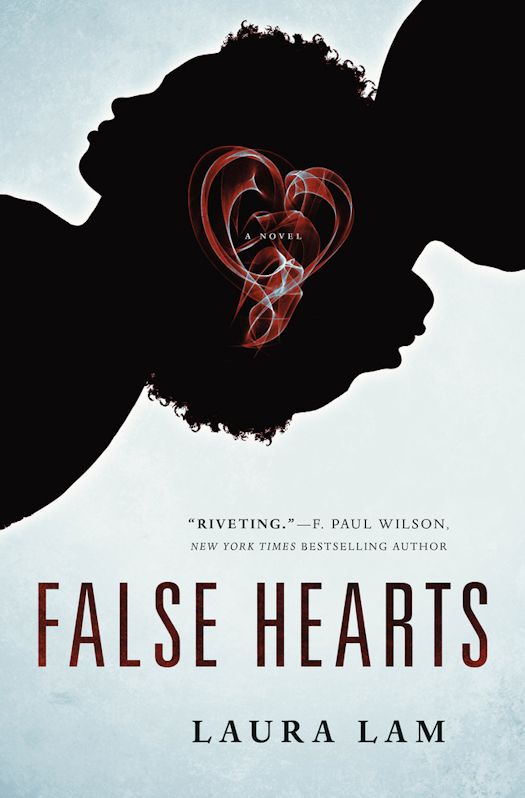 Raised in the closed cult of Mana's Hearth and denied access to modern technology, conjoined sisters Taema and Tila dream of a life beyond the walls of the compound. When the heart they share begins to fail, the twins escape to San Francisco, where they are surgically separated and given new artificial hearts. From then on they pursue lives beyond anything they could have previously imagined.

Ten years later, Tila returns one night to the twins' home in the city, terrified and covered in blood, just before the police arrive and arrest her for murder--the first homicide by a civilian in decades. Tila is suspected of involvement with the Ratel, a powerful crime syndicate that deals in the flow of Zeal, a drug that allows violent minds to enact their darkest desires in a terrifying dreamscape. Taema is given a proposition: go undercover as her sister and perhaps save her twin's life. But during her investigation Taema discovers disturbing links between the twins' past and their present. Once unable to keep anything from each other, the sisters now discover the true cost of secrets.

Once upon a time there was a beautiful princess slightly chubby 40-something reviewer ...who I will name Melanie. Melanie was waiting one cold and frosty morning for bus to go to the gym. She happened to glance at her mobile phone and saw an email from Amazon informing her of a recent order. To her delight the princess reviewer Melanie, read on to discover that book 2 of the Penryn and the End of Days series by Susan Ee, World After had been released. Despite it being 6am and a mere 4C Melanie jumped up and down with delight quickly downloading the book. Even though Melanie had received books from her fairy god mother Qwill  months before that she still hadn't read or reviewed such as City of Bones by Bailey Cunningham and she still hadn't finished King of Thorns by Mark Lawrence she just couldn't resist reading the book she had been looking forward to reading It wasn't long before her chariot bus arrived and she was tucked into reading the book.

Over the next few days Melanie furiously read the book and while she had been eagerly anticipating the new release she was left at the end, a tad disappointed. The lead protagonist Penryn was still forthright and courageous but there was however, very little interaction with the angel Rafe or at least not until the very end. She felt it was aimed more obviously to a younger reader than than book 1. It was still pretty grisly in parts and a nice cliff hanger at the end that entices the reader for book 3.

With World After finished Melanie had much to do to return her book reading kingdom to its former, more organized glory. Who knows what literary delight will be waiting for the princess reviewer the next time she waits for her chariot bus to pick her up and drive her into the golden sunrise.

Well I hope you enjoyed that little tale. Before you think I am completely off my rocker I will share with you what else I read this week. I finished both Pantomine (Pantomime 1) by Laura Lam and at long last King of Thorns (The Broken Empire 2) by Mark Lawrence. While initially I was gripped by Pantomine I thought it really dragged at the end and I totally guessed at the ending. I knew that it was Young Adult Fantasy, but I was just hoping it wouldn't have been so obviously aimed at the younger reader. I have a bad habit of knowing a book/series is aimed at a younger reader and then still hoping the main characters don't act their age.  It's a bit unfair of me to expect this especially as Lam has created a really interesting world. Overall, I liked it want to continue with the series.

I will admit that King of Thorns was hard going. I love Lawrence's writing style and world building however, this book with its jostling back and forth from past to present was a bit overwhelming. I think I should have pushed myself to read it in one go as with big delays between chapters made it all the more difficult to re-engage with. Jorg and the other main characters are very unlikeable so that combined with a complex plot, fantasy world and mix of past and present make the second installment of this series a bit harder to read.

I just barely...and I mean just barely started City of Bones by Bailey Cunningham so I feel that I am on my way to getting back on my reading track. That's it for me this week. I hope you enjoyed my attempt at creative writing and that you have a great week ahead. Until next week Happy Reading.

Hello! This was my first week back home after my holiday in Canada. I got over my jetlag but am trying to adjust to the more autumnal weather. As winter approaches I want to read more 'snuggly' types of books. Did I manage it???  Well this is what I read.

I finished Kindred and Wings (Shifted World 2) by Philippa Ballantine. I will be reviewing this book so I don't want to give to much away but what I can say is that Ballantine is extremely talented. She has the ability to write light-hearted, funny and intriguing steampunk to thoughtful, imaginative fantasy. I don't think I have ever read so many books by one author that I have loved as much. This is a great series, as is her Book of the Order series. I have a special soft sport for the Ministry series and I can HARDLY wait until the next Ministry of Peculiar Occurrences book is out next year. Ballantine writes this series with her hubby Tee Morris and I LOVE IT.

I turned back to Amazon Recommendations for my next book which was 100% naughty as I had loads of other books to read. I decided on Fire and Thorns which was the first in the series by the same name written by Rae Carson. The story sounded sounded quite intriguing  - chubby princess sold off in a political marriage, country at war and a mission to help the helpless. It all sounded like a great, quick, enjoyable read. It was definitely quick and I quite liked it at the start but I soon got bored. It all seemed to be a bit too cliche with the plump princess who turns svelte and gazelle like while at the same time saving all those around her. I thought this was pretty good young fantasy but perhaps a bit too young for an adult reader.

I am really struggling with King of Thorns (Broken Empire 2) by Mark Lawrence. I really enjoyed the first book of this series, the premise and his writing style, but this second installment is just soo morose. I can barely stand to continue on as everything is soo dark and unforgiving. I will continue with it though I may not finish it as soon as I thought I would.

I bought Pantomine (Pantomime 1) by Laura Lam a few weeks ago and then forgot about it. I decided it was high time I get to this book and now I am totally gripped. What a great hero/heroine. How ingenious Lam was to have a hermaphrodite as the main protagonist and combining this with the circus just adds another dimension. I am hoping to have this finished to tell you all about it next week.

That's it for me for this week. I hope I have more to tell you about next week so until next week Happy Reading.