Interview with Jamie Sawyer, author of The Lazarus War Series

Published:
Please welcome Jamie Sawyer to The Qwillery as part of the 2016 Debut Author Challenge Interviews. Artefact (The Lazarus War 1) is published in print on February 23rd by Orbit. 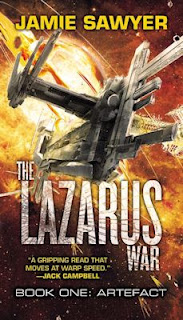 Jamie:  I have always written but I probably started taking it more seriously in my early twenties. There’s something cathartic about it that I just don’t find with any other creative endeavor. I’ve always written SF because I enjoy creating worlds, and creating characters to live in those worlds.

Jamie:  I wish that I was a plotter, and it’s popular to say you’re a pantser, but I’m really more of a hybrid. I usually start with a basic plot outline, develop key scenes from there, then just get writing. When I started writing Artefact I didn’t have much more than the introduction, ending and a few of the characters worked out. This way of writing means that my first draft is often a very long way from where I end up, and it makes editing more painful than it should be, but it’s a more organic process. I really wish that I could write out the scene structures and sketch out the novel in more detail like a proper plotter, but I often find characters leading me in directions inconsistent with my original plot!

Jamie:  Knowing when to stop. Because of how I make that first draft, even when it has gone off to my publisher my mind is still buzzing with ideas. I’m constantly fretting about how I can change or improve the manuscript… I’ve heard musicians say the same thing about their music – you just can’t ever stand back from it and say “this piece of work is finished”.

TQ:  What has influenced your writing?

Jamie:  This is a hard question, because I’ve been influenced by so much! Obvious influences are probably classic SF, like Heinlein’s Starship Troopers, Joe Haldeman’s The Forever War and anything by Arthur C Clarke. I’ve read almost all of the books by these authors; firstly as a youth, but latterly I’ve returned to them in adulthood as well. I’m also influenced by video games, movies and comics – anything that has a good story, and is set within a future environment. I’m a sponge so far as influences go; I think most of them are pretty apparent from my books, but I hope what I’ve written is more than just a combination of my influences.

“A soldier who uses cloned bodies to fight a never-ending war discovers an ancient alien weapon that could turn the tide of the conflict.”

“A full-on pedal to the floor space adventure with aliens, big guns, starships, an ancient artefact, cold war and a man who just won’t stay dead. Welcome to the War.”

TQ:  Tell us something about Artefact that is not found in the book description.

Jamie:  There are two cold wars in Artefact. Firstly, between the Alliance (the good guys of The Lazarus War universe; a future NATO of sorts) and the Directorate (a broad union of eastern Asiatic states, including China and Unified Korea). Secondly, between humanity and the alien Krell. One of the questions I’d ask readers to consider is which enemy is worse? The Krell are responsible for the bigger body count, but the Directorate are human. If we can understand what they do and why they do it, does that make their actions all-the-worse?

TQ:  What inspired you to write Artefact? What appeals to you about writing Science Fiction?

Jamie:  I’d probably rely on my answer above about my influences, but to be more specific I wanted to write an exciting, fun science fiction novel that would be something I would want to read. That meant combining all of my favorite ideas: so big aliens, power armor, ancient artefacts and disposable bodies! You can probably trace the heritage of lots of things in the book to their source: for example, Clarke’s Monolith inspired the Artefact.

As to what appeals to me about writing science fiction, it’s the idea that there are no limits. There are no right or wrong answers. The future setting is important, but it’s putting characters into that universe – and watching how they interact with the SF setting, and how it changes their lives – that really excites me.

TQ:  What sort of research did you do for Artefact?

Jamie:  I researched space dynamics, including topics like time-dilation. The science provided a backdrop to the wider story though; Artefact isn’t a hard science story, and I’d probably say I’ve placed more emphasis on the adventure aspects than the science. Although it is obviously very far advanced from our present tech, in my mind I also drew parallels between the Western world’s use of drones and the Alliance’s use of simulant technology. I read a lot about how drone pilots can become dysfunctional as a result of prolonged operation, and how the tech can cause psychological damage even though the pilots are never physically at war.

Jamie:  The easiest character was probably Captain Conrad Harris (the narrator). He kind of just did his own thing; he’s worn out and jaded, but he has a good heart and will risk everything to protect his team. Harris might get drunk a little too often, and I’m sure that Jenkins (his second in command) would call him “a bit of an asshole”, but basically he’s a good guy.

The most difficult character to write was probably the antagonist, Dr Kellerman. It’s very easy to write an antagonist as basically a Bond villain (especially when he’s bald and gets around in a hover-chair!) but I wanted Kellerman to be a multi-dimensional character. He has reasons for doing what he’s doing, even if the rest of us might think they’re unjustifiable. Kellerman really doesn’t think that he is evil, and by the end of the book hopefully you’ll see how he self-justifies his behavior.

Harris and Kellerman are really reflections of the same principles. They both have tragedy under the surface: but one has decided to take a certain course to correct the loss, whereas the other takes a darker path. I can’t say much more on this without giving away some pretty big plot points, so I’ll stop there!

TQ:  Which question about Artefact do you wish someone would ask? Ask it and answer it!

Jamie:  Who are the Shard? What do they want with the Krell and with us? Are they really gone?

The answers to these questions, and much more, might be revealed later in The Lazarus War.

TQ:  Give us one or two favorite non-spoilery quotes from Artefact.

Jamie:  Well, although Artefact is out in February 2016 in paperback, it has been out for a while on ebook. The sequel to Artefact has already been written, and has been released on ebook too. Called Legion, it’s due for paperback release in May 2016. There was also an ebook novella released in November 2015, called Redemption, which takes the series in a new direction with non-military characters (that one was a lot of fun to write!). I’ve just submitted the copy-edited manuscript of The Lazarus War: Origins – the final book in the series – to my editor, so that will be ready for release in August 2016.

As to where I’m going from there, I’d like to write some more stories in The Lazarus War universe. There’s a lot to explore out there: some of it good, most of it frightening, all of it exciting. I’m currently working on some new ideas for the different directions I could take the ending to the original series. But I’m also considering some story ideas set in completely different universes, so there are a lot of possibilities…

Jamie:  It was a pleasure! Anyone who enjoys Artefact should definitely pick up Legion: things might’ve gotten hot for Harris in Artefact, but they get a whole lot worse in Legion… 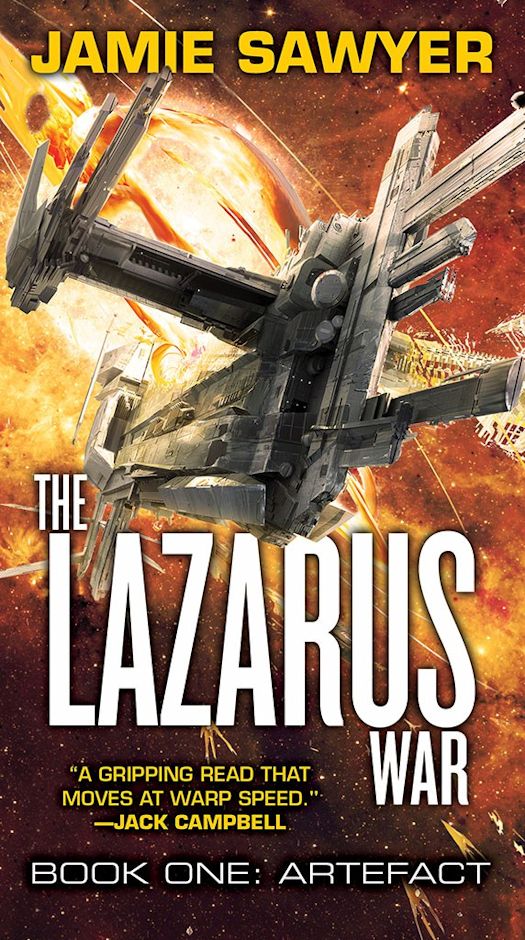 Artefact is book one of The Lazarus War, an explosive new space adventure series from one of the brightest new stars in science fiction - perfect for fans of The Edge of Tomorrow, Alien and James S. A. Corey's Expanse series. Jack Campbell, author of the Lost Fleet novels calls it "a gripping read that moves at warp speed."

Mankind has spread to the stars, only to become locked in warfare with an insidious alien race. All that stands against the alien menace are the soldiers of the Simulant Operation Programme, an elite military team remotely operating avatars in the most dangerous theatres of war.

Captain Conrad Harris has died hundreds of times - running suicide missions in simulant bodies. Known as Lazarus, he is a man addicted to death. So when a secret research station deep in alien territory suddenly goes dark, there is no other man who could possibly lead a rescue mission.

But Harris hasn't been trained for what he's about to find. And this time, he may not be coming back . . .

Artefact is an action-drenched tale of elite space marines, deep space exploration and galactic empires. Discover The Lazarus War - the thrilling new space opera series from one of the most exciting new voices in science fiction.

More in The Lazarus War 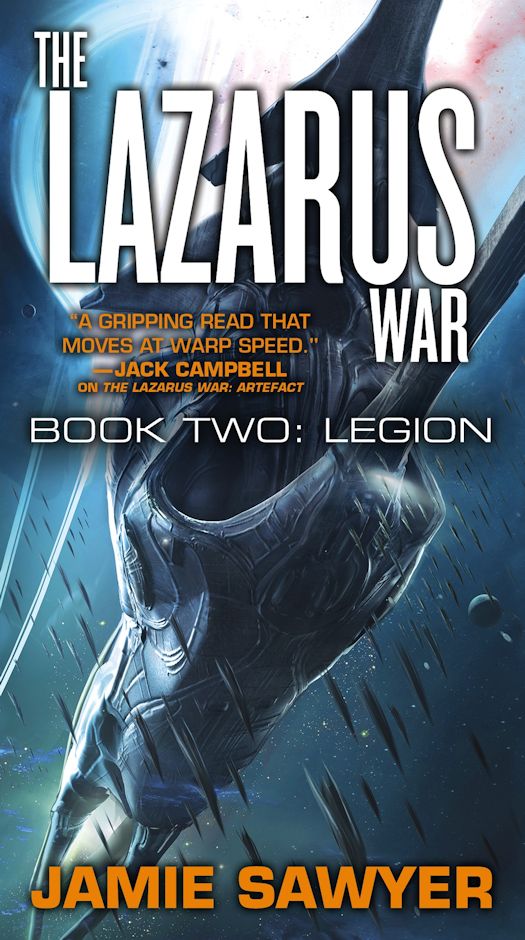 Following Artefact, Legion is the second book of the Lazarus War, an explosive new space adventure series from one of the brightest new stars in science fiction - perfect for fans of The Edge of Tomorrow, Alien and James S. A. Corey's Expanse series.

Conrad Harris is the legend known as Lazarus, and he has died hundreds of times. Using simulant bodies, he runs suicide missions in the depths of space. But he always comes back.

As commanding officer of the Lazarus Legion, Harris and his elite Simulant Operations team are humanity's last line of defence against the hostile alien race known as the Krell.

Having survived their ordeal on Helios, they're now leading a large-scale mission to the perilous, unexplored region of the Damascus Rift. There, another Artefact has been discovered. It is the product of an ancient alien life form - and a possible weapon to be used against the Krell.

This Artefact could finally help humanity win the war. But what Harris and the Lazarus Legion will discover there is from their worst nightmares . . .

Discover the Lazarus War - the thrilling new space opera series of elite space marines and galactic empires, from one of the most exciting new voices in science fiction. 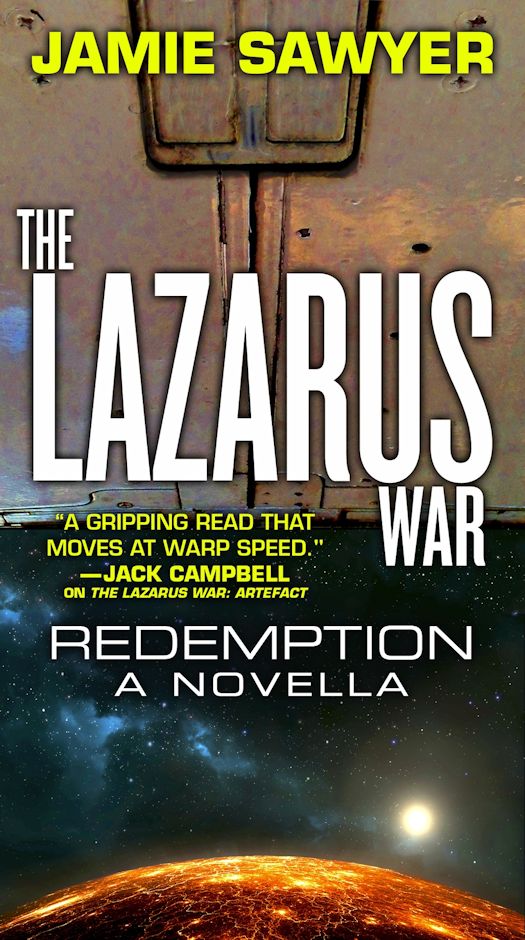 See the world of the Lazarus War in a whole new light, in this thrilling spin-off novella from the new science fiction star Jamie Sawyer.

Their family reunion will be disrupted, however, when a catastrophe strikes the space station. The crew of the Edison suddenly find themselves fighting for their lives - and amongst the chaos, Taniya will discover that she's not the only member of the crew with a secret . . .

Jamie Sawyer was born in 1979 in Newbury, Berkshire. He studied Law at the University of East Anglia, Norwich, acquiring a Master's degree in human rights and surveillance law. Jamie is a full-time barrister, practicing in criminal law. When he isn't working in law or writing, Jamie enjoys spending time with his family in Essex. He is an enthusiastic reader of all types of SF, especially classic authors such as Heinlein and Haldeman.