The Qwillery | category: Master of Crows

I am going to start this Week in Review by thanking my cat Tilly for walking across my keyboard and deleting everything I had written (not very much but still!) Hopefully, this will result in a more fabulous post since I have been able to write it twice Fingers crossed! Anyway what did I read?

I finished Year of the Demon which is the second in the Fated Blades series by Steve Bein. I read book 1, Daughter of the Sword, a couple of years ago and loved the Japanese folklore and tradition, the history of the fated sword - Glorious Victory Unsought - told by the retired academic, Yamada, and the story of Mariko. Mairko is one of the few women in the Japanese police force and she ends up owning the sword. Book 2 follows a few months after the events of book 1 where Mariko struggles with the loss of her sensei Yamada and of her trigger finger. Danger is never far away from Mariko when her beloved Inazuma blade is stolen from her locked apartment the same evening after a demon mask is stolen from a drug lord. Coincidence? Of course not. Bein takes us back to the 16th century and tells the story of Okuma Diagora who has been bequeathed the blade from his father and Shichio who has the demon mask which draws him to Glorious Victory Unsought. Bein also takes us even further back in time to approximately the 15th century, to a poor fishing village. We meet Kaida, who lost her arm in storm that killed her mother. Kaida is an ama - a pearl diver and cruelly tormented by her step-sisters. Following a ship wreck a group land in the village in search of the Inazuma blade which how rests in a watery tomb. The vicious group of thugs terrorize the village in an attempt to find the sword and create a demon mask in order to find it. As a talented diver Kaida is fated to retrieve the blade by using the demon mask which sets off a violent chain of events. Back to Mariko where the mask and sword come together again and in the hands of a terrorist group who want to use both to bring about  - the year of the demon.

I enjoyed Year of the Demon but I wasn't quite as gripped as I had been with book 1. It felt unbalanced in the telling of the three main characters - Mariko, Diagora and Kaida. Much of the book focused on Diagora and the evil Shichio whereas Kaida's story seemed to be mostly left untold. Despite the violence the story had a gentleness to it which I think came mainly from Diagora and his samurai code. The book reads a bit more like historical fiction but a worthy read nonetheless.

Year of the Demon was one of those books you could dip in and out of and my 'dip out' consisted of two short stories - The Light Within by Grace Draven and Alpha and Omega by Patricia Briggs (technically this was a re-read). The Light Within is from the Master of Crows series and tells the story of Silhara and Martise's visit to his father's family to celebrate the winter festival. I think this story could have been easily named - Silhara Lights a Bonfire. Draven took the term short story too literally and very little happens in the few words dedicated to these two characters. I was rather disappointed. I had already read Alpha and Omega as part of anthology On The Prowl but found it on Amazon as a single short story. I have pre-ordered the soon to be released Dead Heat and felt the need to re-acquaint myself with these two characters. I do like these two characters and looking forward to the release of book 4.

For those of you who follow my WIR will remember that I have been part of the beta review group for Michael Sullivan's new book Rhune. I have been taking my time reading this book (very hard for me to do) but I finished my first read through and will be starting a re-read next week. The final book I read this week was Flex by the author with the coolest name EVER  - Ferrett Steinmetz. This book is part of the Debut Author Challenge and I will be writing a full review so don't want to give anything away. Keep your eyes out for it.

That is it for me this week. I hope you all have a fantastic February and I look forward to sharing my weekly reads with you next Sunday. Happy Reading!
Source: qwillery.blogspot.com
0 Comments+ Sharelabels (8)Flag
AllAlpha and OmegaFerrett SteinmetzGrace DravenMaster of CrowsMelanie's Week in ReviewPatricia BriggsSteve BeinThe Fated Blades

Happy New Year! I hope 2014 brings you the very best in books. I had a rather successful week in reading despite only having only 2 days of commuting into work. So what did I read? 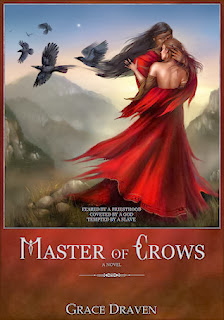 Well I finished the two books I mentioned at the end of my WIR last week which were Broken Homes (Peter Grant / Rivers of London 4) by Ben Aaronovitch and Master of Crows by Grace Draven. I also started and finished Royal Street (Sentinels of New Orleans 1) by Suzanne Johnson. I will be doing full reviews of both Broken Homes and Royal Street so I can't give too much away here. What I can say is that I enjoyed both although Broken Homes more so. Royal Street had very much the 'first book' feel about it...which makes sense as it was the first book in the series and Johnson's first book. You know the type of first book where  the characters aren't fully developed and do the opposite of everything they are told?

I came to read Master of Crows by Grace Draven after the author Ilona Andrews recommended it on her blog. Master of Crows is self-published. I wasn't sure about romantic fantasy but Andrews assured her fan base that it was a great story and I whole heartedly agreed. I LOVED IT! It was high fantasy with characters that were well developed. It really flowed along and there wasn't so much romance that it got in the way of the story. The added bonus was the cover. Check it out! I have added a slightly larger image so that you can see the full affect. GORGEOUS! As you will know I am a bit obsessed by book covers so I spent a lot of time looking at it. In fact I think it is one of my all time favourite covers. 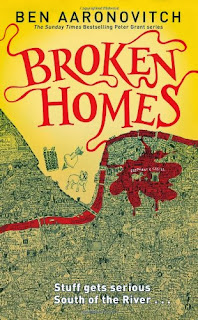 Since I am on on the topic of book covers have a look at the one for Broken Homes. This is another great cover although doesn't have quite the instant impact as Master of Crows but is a excellent nonetheless. This cover is best looked at on zoom. The cover was created by the artist Stephen Walter who specialises in these funky, graphite maps.

Well I am sure you think I probably have OaBCD - Obsessed about (or a-boot since I am Canadian) Book Cover Disorder as this whole WIR was largely about the covers. I am truly not that shallow that I judge a book purely by the cover but when I see a really great one or a really bad one then I feel I should let you know.

I should get back to reading Silvered by Tanya Huff which I only just started and hope to tell you all about next week. So until then Happy Reading!