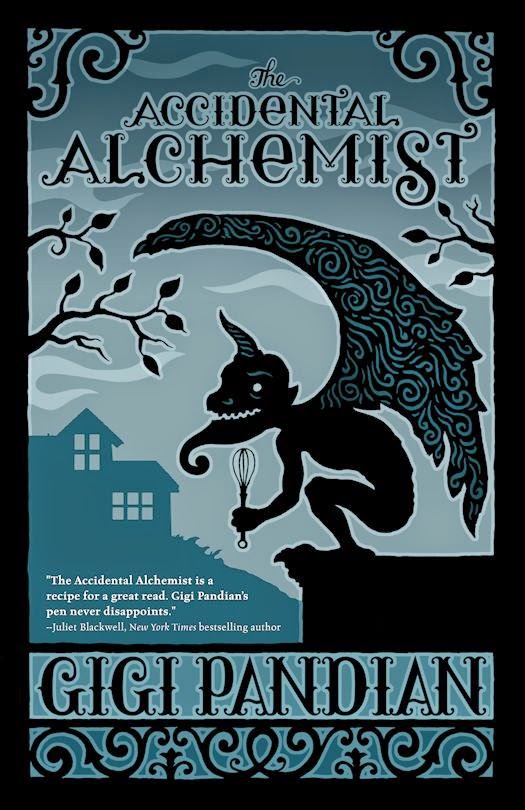 Unpacking her belongings in her new hometown of Portland, Oregon, herbalist and reformed alchemist Zoe Faust can’t help but notice she’s picked up a stowaway. Dorian Robert-Houdin is a living, breathing three-and-half-foot gargoyle—not to mention a master of French cuisine—and he needs Zoe’s expertise to decipher a centuries-old text. Zoe, who’s trying to put her old life behind her, isn’t so sure she wants to reopen her alchemical past . . . until the dead man on her porch leaves her no choice.

I’ll bet everyone has uttered the old adage “never judge a book by its cover” at least once in their life. Well, in the case of The Accidental Alchemist, I totally judged a book by its cover and I’m glad I did. My interest was definitely piqued by the grimacing gargoyle on the cover holding an innocuous kitchen whisk. I have always been fascinated by gargoyles and the cover illustration by Hugh D’Andrade and cover design by Kevin Brown is phenomenal.

Zoe Faust has just moved to Portland, Oregon in the hopes of finally settling down. She barely begins unpacking before a gargoyle named Dorian appears from his hiding place in one of her crates. It seems Dorian needs the help of an Alchemist, albeit a reluctant one, to translate something from his antique Alchemy book. Zoe agrees to help the little gargoyle as best as she can. Fourteen year old Brixton accepts a dare and breaks into Zoe’s house, thinking it’s haunted. He eavesdrops on Zoe and Dorian’s conversation, and becomes an uninvited partner in the secret of Dorian’s existence. The very next morning problems multiply as the handyman Zoe hired to fix up her house winds up dead on her front lawn.

The three main characters are great. Dorian is my favorite; I fell for him right from the start. I love his lapses into French and delighted in his general disdain of America. I was often quite amused at his comments as he gamely adapted his love of cooking gourmet French cuisine with Zoe’s vegan diet. Zoe is likeable and well-meaning although at times I found her to be a bit self-pitying. I especially enjoyed the historical information about alchemy, herbalists, and magicians from her past. Living as long as she has, Zoe’s back stories were intriguing and meant to showcase her feelings of loneliness and unworthiness. I felt that while some portions rang true, other revelations were a bit of a letdown. Brixton, largely neglected by his single parent mom, is reckless and gets into trouble frequently. He adds a bit of mayhem, humor, and warmth into Zoe’s life and in my opinion, makes her more likeable.

One peeve was that the minor characters were really minor. I knew there was a murderer among them but knew so little about each one that it was hard to decide on a suspect. I would have liked to have read more interactions with these characters to get a better feel as to a possible motive before the final reveal.

All in all, The Accidental Alchemist is a charming paranormal cozy with entertaining characters. I hope Dorian stays with Zoe, because in my opinion, he’s the best sidekick since John Watson or Aunt Dimity.
Source: qwillery.blogspot.com
0 Comments+ Sharelabels (6)Flag
AllBook ReviewsGigi PandianMidnight InkThe Accidental Alchemistreviewtrinitytwo