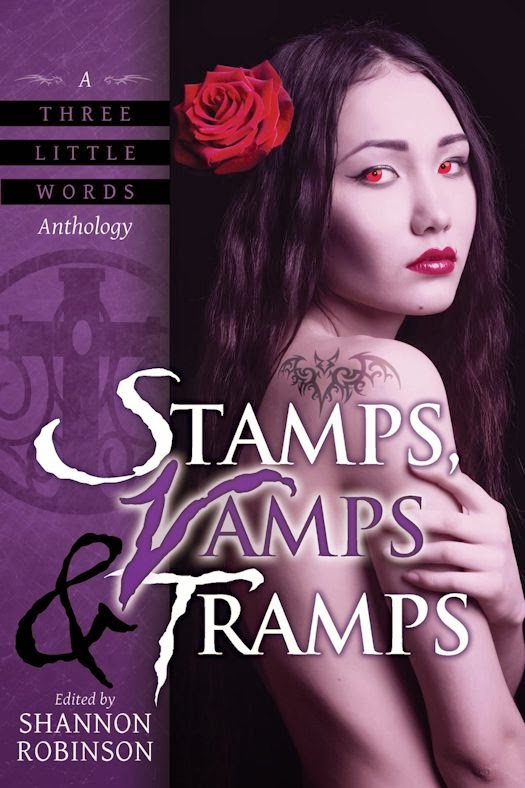 Grecian prostitutes and blood guzzling birds, pickle-sized vampires who wear their hearts on their sleeves, sexy immortals that fear human greed and memories that become tattoos; Stamps, Vamps & Tramps crosses genres to deliver bone-chilling stories that will keep you up at night.

Sixteen talented authors take you on a journey where stamps aren't always inked, tramps aren't always hookers, and vampires aren't always at the top of the food chain. From the colonnade of ancient Greece to a small town amusement park, from the battlefield to the urban center, this anthology will suck you in to the very end.

Stamps, Vamps & Tramps is a Three Little Words anthology – where authors write stories with two or more of the semi-associated words as the basis for the story. It is an interesting concept – taking tattoos, vagabonds, and vampires and coming up with related stories. I liked most of the stories in this anthology.

For example, Rachel Caine starts the book off with her ‘Easy Mark,’ the story about a young girl riding the rails who finds someone who helps people like her and who deals with the people who want to cause trouble. ‘Only Darkness’ by Paul Whitcover had an interesting perspective about art in general and drawing in particular, where something like a vampire tries to have its portrait drawn since it cannot see itself in a mirror. I found its perspective about artists and their ability to create art interesting, along with how an artist might handle losing their ability. ‘Flies in the Ink’ has a young girl vampire who turns out to be a serial killer keeping tattoos as trophies of her murders while a father tries to use her to replace his daughter.

One or two of the stories were almost too short and hokey for me to appreciate. I found ‘Mungo the Vampire’ to be one of those that could have been excluded from the book without any loss. ‘Josephine the Tattoo Queen’ by Joshua Green was almost predictable. Though it was short, Nancy Kilpatrick’s ‘The Hungry Living Dead’ turns the page on vampires making humans to be the real predators. ‘Stabilization’ by Daniels Parseleti viewed madness from the perspective of an institutionalized person. Mary Turzillo’s ‘A Virgin Hand Disarmed’ gives us a very different view of William Shakespeare.

I enjoyed the folksy tone of Gemma Files’ ‘His Face, All Red,’ enough to track down some of her other works. Altogether, this provided a nice taste of new authors and their works for me, which is the best trick for any anthology.