Celebrate Banned Books Week at your library with Image Comics' Library Livestreams
PORTLAND, OR, 09/13/2018 — Image Comics is celebrating Banned Books Week with Comic Book Legal Defense Fund and The Graphic Novels and Comics Round Table of the American Library Association by producing a week of Library Livestreams featuring creators Nick Dragotta (EAST OF WEST), Grace Ellis (MOONSTRUCK, Lumberjanes), Pornsak Pichetshote (INFIDEL), Charles Soule (CURSE WORDS), and Skottie Young (I HATE FAIRYLAND, BULLY WARS, MIDDLEWEST). Libraries around the country are invited to welcome their patrons for these exciting creator conversations during Banned Books Week, the annual celebration of the freedom to read, which runs from September 23rd-29th. Each Image Comics Library Livestream will be a freewheeling discussion on creativity, freedom of expression, and the power of storytelling that library patrons around the world will be able to enjoy.

"Freedom of expression is a core value at Image Comics," said Eric Stephenson, Publisher at Image Comics. "Banned Books Week is an important opportunity to reflect on why free speech matters, and why this year's Banned Books Week theme, 'Banning Books Silences Stories' is such a resonant one. Not too long ago, comics of all kinds were silenced, and today we see comics by marginalized voices as the most frequently challenged. We're proud of our creators who are participating in these Library Livestreams and thrilled to be a partner with CBLDF and the ALA Graphic Novels and Comics Round Table to advance the discussion about the power of free expression. In our challenging times, this conversation is one of the most important ones of all."

IMAGE COMICS LIVESTREAM SCHEDULE:
Presented by Image Comics with The Comic Book Legal Defense Fund and The Graphic Novels and Comics Round Table of the American Library Association, the Image Comics Library Livestreams feature:
HOW TO PARTICIPATE:
Simply visit the Image Comics Twitch page at https://www.twitch.tv/imagecomics. All webinars will run from 7-8pm EST and will include a discussion between moderator and creator for 40-45 minutes, followed by 15-20 minutes of Q&A participation with the live audience. No registration is required to view these livestreams.

ABOUT IMAGE COMICS
Image Comics is a comic book and graphic novel publisher founded in 1992 by a collective of bestselling artists. Image has since gone on to become one of the largest comics publishers in the United States. Image currently has five partners: Robert Kirkman, Erik Larsen, Todd McFarlane, Marc Silvestri, and Jim Valentino. It consists of five major houses: Todd McFarlane Productions, Top Cow Productions, Shadowline Comics, Skybound Entertainment, and Image Central. Image publishes comics and graphic novels in nearly every genre, sub-genre, and style imaginable. It offers science fiction, fantasy, romance, horror, crime fiction, historical fiction, humor and more by the finest artists and writers working in the medium today. For more information, visit www.imagecomics.com.
ABOUT THE GRAPHIC NOVELS AND COMICS ROUND TABLE OF THE AMERICAN LIBRARY ASSOCIATION
The Graphic Novels and Comics Round Table of the American Library Association is dedicated to supporting library staff in all aspects of engaging with graphic novels and comics, including collection development, programming, and advocacy. For more information connect with GNCRT on Facebook, Twitter, Instagram, and GNCRT ALA Connect page.
ABOUT THE COMIC BOOK LEGAL DEFENSE FUND (CBLDF)
The Comic Book Legal Defense Fund is a non-profit organization protecting the freedom to read comics! Our work protects readers, creators, librarians, retailers, publishers, and educators who face the threat of censorship. We monitor legislation and challenge laws that would limit the First Amendment. We create resources that promote understanding of comics and the rights our community is guaranteed. Every day we publish news and information about censorship events as they happen. We are partners in the Kids’ Right to Read Project and Banned Books Week. Our expert legal team is available to respond to First Amendment emergencies at a moment’s notice. CBLDF is a lean organization that works hard to protect the rights on which our community depends. For more information, visit www.cbldf.org.
Source: qwillery.blogspot.com
0 Comments+ Sharelabels (8)Flag
AllBanned Books WeekCharles SouleGrace EllisImage ComicsNick DragottaPornsak PichetshoteSkottie Youngcomics

Infidel In Trade Paperback in September

This tautly woven series tackles controversial topics in race and racism and how it can affect people from different cultures and landed a movie deal after just two issues, with The Hollywood Reporter breaking the news that Michael Sugar (Academy Award-winning producer of Spotlight for Best Picture) and TriStar will adapt the series for the big screen.

Rife with political undertones, INFIDEL can best be described as Get Out meets Insidious and explores Islamophobia through a haunting and chilling story about one American Muslim woman and her multi-ethnic neighbors who move into a building haunted by creatures that feed on xenophobia.

“Like nothing I’ve read before… Infidel is a creepy descent into the haunted human
mind. Highly recommended.” —Steve Niles, 30 Days of Night

“Infidel expertly rides the line between reality and the unknown… I loved it. Believable
horror that’s as unsettling as it is beautiful to look at.” —Jock, WYTCHES, All-Star
Batman

“Brilliant horror with a terrifying contemporary resonance. This feels way, way too real.” —Mike Carey, The Girl with All the Gifts, Lucifer

“This is a perfectly structured comic script and a wonderful attempt at expansive genre.
Not just the horror book of the moment, to my mind Infidel will go down as a definitive
comic of 2018… Great stuff from a top tier team who understands how to manipulate
the reader through their medium completely.” —Joshua Dysart, Swamp Thing,
Harbinger

“A classic horror story… used to superb effect, with a twist that makes it a bit more
than just another well-told tale.” —UpRoxx

“A book that will scare you—and make you think.” —The Oregonian

“Both as timely as it is genuinely freaky.” —Scream Magazine

“One of the best debuts in years. Haunting, beautiful, breaking the classic haunted
house mold while still honoring the tradition. MUST READ.” —Joshua Hale Fialkov,
Elk’s Run, I, Vampire

“Horror is so hard to do right in comics and this book nails it to the wall… Super strong
work all around.” —Sebastian Girner, SCALES & SCOUNDRELS

“Infidel is a great comic filled with painfully real characters and the feeling that we are all
just moments away from living our own horror story.” —Peter Gross, Lucifer, The
Unwritten

“This is a strong debut from this creative team, and one that should not be ignored.” —Newsarama

“An exceptionally well-told horror story... a stand-out. It challenges expectations
by including the tensions between characters of different faiths, while not being explicitly about that difference.” —Comicosity

“Left me an emotional wreck… an uncompromising, powerful book that demands your
complete attention.” —Multiversity Comics

“This is a must for horror fans or those that like stories with some layers.” —Graphic
olicy

“A strong start…This is a book that will constantly keep you on your heels.”
—Comicon.com

“Fans of last year’s break-out hit Get Out will certainly enjoy this contemporary
exploration of the politics of relationships, gender, and religion, with a healthy dose of
nightmare material.” —The Horror News Network

“Pichetshote may be doing for comics what Jordan Peele has done for films… Aaron
Campbell and José Villarrubia may be one of the most dynamic duos in comics right
now… Infidel is… one of the most interesting horror comics, and just comics in
general, to premiere in a long time. This is an absolute must read.” —Ghastly
Grinning 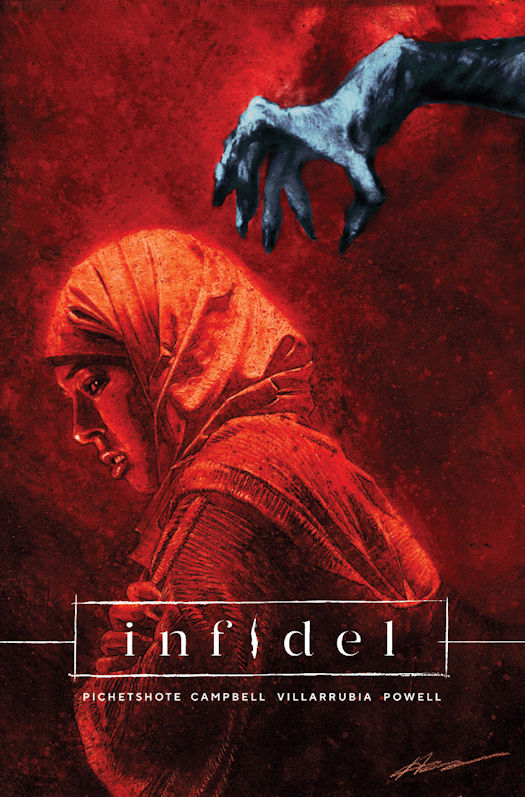 First Four in a Series of VIrgin Editions from Image Comics

FIRST FOUR
ARTIST APPRECIATION VARIANTS REVEALED
PORTLAND, OR, 03/01/2018 — Image Comics is pleased to reveal the first four of a series of virgin editions of highly anticipated new issues—INFIDEL #1 by Pornsak Pichetshote and Aaron Campbell, MOONSHINE #8 by Brian Azzarello and Eduardo Risso, SAGA #50 by Brian K. Vaughan and Fiona Staples, and GIDEON FALLS #1 by Jeff Lemire and Andrea Sorrentino—each of which will feature back cover quotes from the writers on the importance of their collaborating artists.

The front covers of these variants will be without series logo, Image logo, issue number, or price.

GIDEON FALLS #1 by Jeff Lemire and Andrea Sorrentino will be available on Wednesday, March 7th.

INFIDEL #1 by Pornsak Pichetshote and Aaron Campbell will be available on Wednesday, March 14th.

MOONSHINE #8 by Brian Azzarello and Eduardo Risso will be available on Wednesday, March 21st. 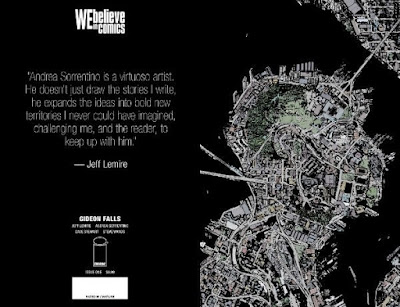 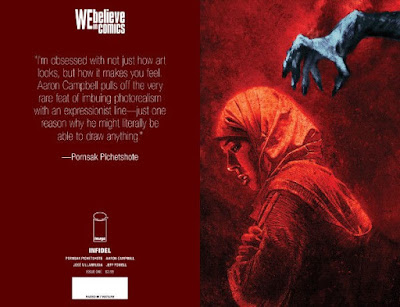 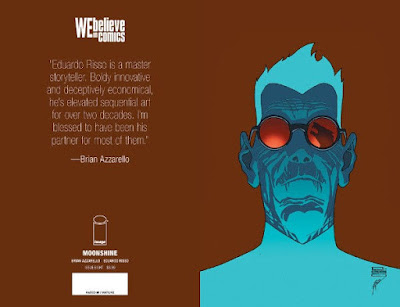 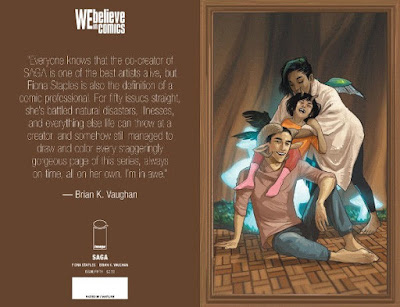 Rife with political undertones, the new series will explore Islamophobia through a haunting and chilling story about one American Muslim woman and her multi-ethnic neighbors who move into a building haunted by creatures that feed on xenophobia.

“I’m a huge fan of horror and was really interested in a horror story that more accurately reflected the multi-racial world we live in and the fears that seem to come with it,” said Pichetshote. “Aaron, Jose, Jeff, and I are really trying to take a classic horror staple—the haunted house—and update everything about it—setting it in the heart of the city, giving it a multi-racial cast where those backgrounds actually matter to the turns of our story, and centering our horror around the very distinct fears of today. I’ve taken to calling Infidel ‘political horror,’ and while we’ve been cooking this project for a while, the success of movies like Get Out make us optimistic that audiences will be as hungry to read something like this as we are to make it.”

This tautly-woven new series tackles controversial topics in race and racism and how it can affect people from different cultures. INFIDEL features a diverse, multi-ethnic cast where character backgrounds affect the plot twists and pacing as the story unfolds from issue to issue.

Campbell added: “The horror genre has always been near and dear to me. From an early age it has shaped much of my artistic sensibilities, showing itself in deep shadows, gritting locations, and emotional dread.  Really good horror gives us a safe place to indulge in our most primal emotions, confront fear eagerly, and ask deeply loaded questions with acerbic abandon. Great horror adds to this a dark mirror that reflects, with uneasy clarity, the existential and ontological threats of our humanity. For Stoker it was our place in nature. For Lovecraft, our place in the universe. Romero's zombies threaten our individuality and King gave us normal people who could stand as surrogates for our own terror. Now, more and more, the genre is concerning itself with the threats of us vs. them. Tribalism. And so I could not be more proud or excited to be a part of the Infidel team. Finally, I get to work with the incomparable Jose Villarrubia who I've known since my MICA days as a shaggy haired illustration wimp. And Pornsak has written a truly terrifying tale that cuts directly to the quick of current events. It's a story about the broad brush of fear. A young, wonderful, hateless girl wants to be, just be, but the fearful few have other plans…” 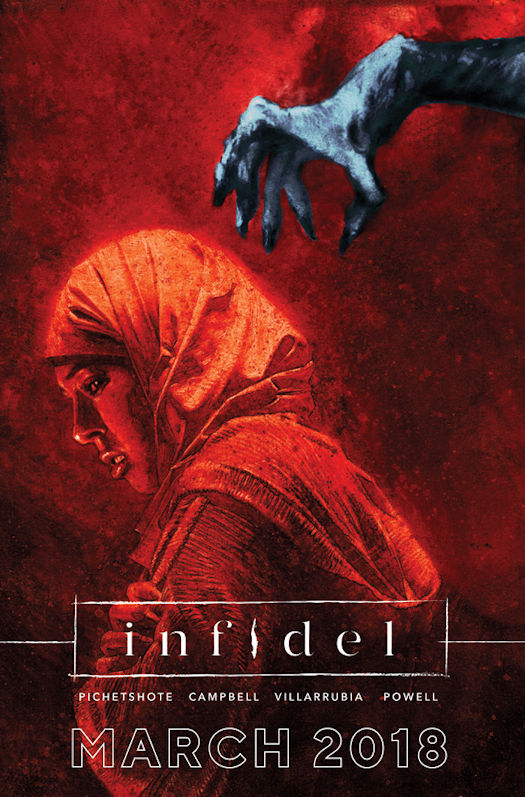