The Qwillery | category: Pride and Platypus

Published:
I've been waiting for this novel since I first heard about it. Pride and Platypus is part of Vera Nazarian's Supernatural Jane Austen Series, which includes Mansfield Park and Mummies: Monster Mayhem, Matrimony, Ancient Curses, True Love, and Other Dire Delights (November 2009) and Northanger Abbey and Angels and Dragons (December 2010). An additional 4 novels are planned for the series. 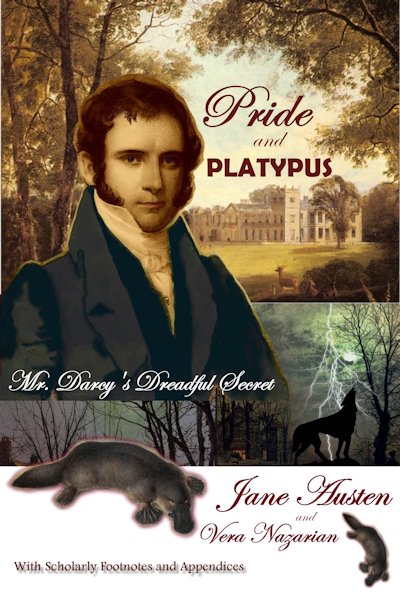 When the moon is full over Regency England, all the gentlemen are subject to its curse...

The powerful, mysterious, handsome, and odious Mr. Darcy announces that Miss Elizabeth Bennet is not good enough to tempt him. The young lady determines to find out his one secret weakness -- all the while surviving unwanted proposals, Regency balls, foolish sisters, seductive wolves, matchmaking mothers, malodorous skunks, general lunacy, and the demonic onslaught of the entire wild animal kingdom!

What awaits her is something unexpected. And only moon, matrimony, and true love can overcome pride and prejudice!