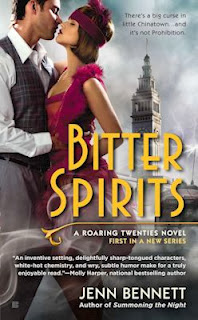 TQ:  Welcome back to The Qwillery.

Jenn:  I'm thrilled to be back! Love this blog.

TQ:  You've written 4 Arcadia Bell novels and 2 Roaring Twenties series novels. What remains the most challenging thing for you about writing? Has your writing process changed over the years?

Jenn:  When I wrote KINDLING THE MOON, my first book, I wrote it by the seat of my pants in six weeks. Now I loosely plot the first third of a book before writing, and continue to plot as I discover things about my characters. And I've slowed down a bit. It generally takes me 2-3 months to write a book. That's my sweet spot, and I like to write three books a year—any less and I get twitchy. Most challenging thing about writing? Keeping my emotions in check and not losing my confidence. I always say that half the time, writers are all, "I'M A GENIUS!" And the other half, we're all, "I'M A FAILURE."

TQ:  What inspired you to write the Roaring Twenties series?

Jenn:  The first version of BITTER SPIRITS was actually a historical urban fantasy with different characters (and wildly different world-building) set in an alternate Baltimore. But somewhere along the way, I realized that I wanted to concentrate on the relationship between the main characters. A year or so later, I scrapped that first version and started all over again, this time in San Francisco. Once I began dreaming up Winter and Aida’s romance there, everything clicked into place.

TQ:  Why Romance set in the Twenties in San Francisco?

Jenn:  I’ve been attracted to the 1920s since I was a teenager and have amassed a small library of books, photos, and magazines from that decade. I’m also (not so) secretly in love with the Bay Area, so putting the two together was a labor of love and an absolute joy for me.

TQ:  Tell us something about Bitter Spirits (Roaring Twenties 1) that is not in the book description.

Jenn:  Regarding the paranormal element, apart from Aida’s talents as a spirit medium and the ghosts haunting Winter, a little folk magic is used by auxiliary characters—both hoodoo and traditional Chinese magic. I used to travel to Hong Kong, China, and Taiwan for work, which is what sparked my interest in Chinese culture. As for the hoodoo, Velma Toussaint (the owner of the speakeasy where my heroine works) has a few tricks up her sleeve. I went to grad school near New Orleans and soaked up the hoodoo/vodou culture there, which definitely helped when it came to writing Velma and the magical aid she provides my hero and heroine.

TQ:  What sort of research did you do for Bitter Spirits?

Jenn:  I’ve been fascinated with early 20th century culture since I was a teenager—the 1920s in particular. Over the years, I’ve amassed a small library of research material, including maps, magazines, books, and photographs from that era. In regards to Aida’s profession as a trance spirit medium, that was rather fun to research. Spiritualism’s heyday lasted from the second half of the 19th century through the 1920s, and during that time, several mediums made splashy national headlines—like the Fox sisters or Cora Scott or Paschal Beverly Randolph. Even President Abraham Lincoln attended séances organized by his wife!

TQ:  What would you do (as a profession) if you could live in the Roaring Twenties of your novels?

Jenn:  By day, I'd like to be a telephone operator in one of the luxury San Francisco hotels—so I could listen in on all the fascinating conversations—and by night, write all those conversations down in novels.

TQ:  Do your Arcadia Bell UF series and the Roaring Twenties series have anything in common?

Jenn:  They both take place in the same area of the country (Central/Northern coastal California). They both have esoteric magic systems. And they both feature character-driven stories. But where Arcadia was romantic urban fantasy, BITTER SPIRITS is adventurous romance. The focus is on the couple and how they relate to each other. The mystery/paranormal element is driving them together instead of driving the story.

Jenn:  The second book in the Roaring Twenties series comes out in early June (GRIM SHADOWS), and the fourth Arcadia Bell novel, BANISHING THE DARK, goes on sale in May. In 2015, I'll have a brand new young adult book coming out—a contemporary—which will be different than anything else I've written so far. I'm very excited about all of this.

Jenn:  The pleasure was all mine! 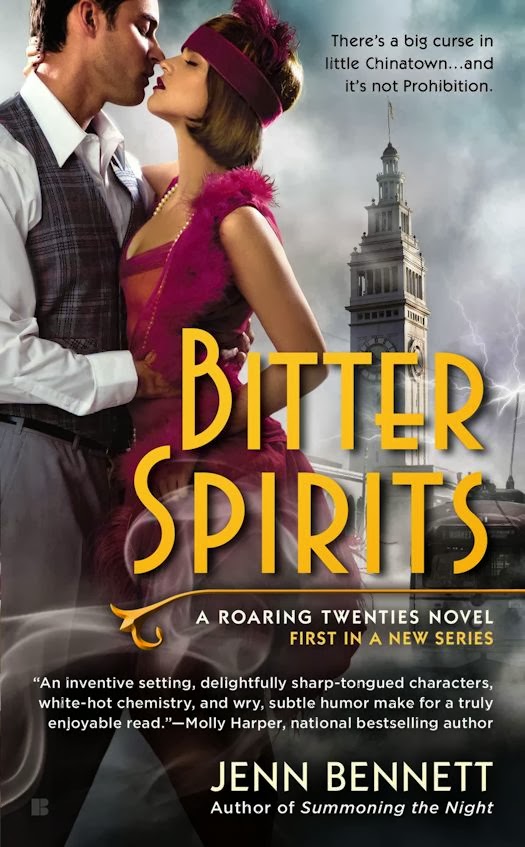 It’s the roaring twenties, and San Francisco is a hotbed of illegal boozing, raw lust, and black magic. The fog-covered Bay Area can be an intoxicating scene, particularly when you specialize in spirits…

Aida Palmer performs a spirit medium show onstage at Chinatown’s illustrious Gris-Gris speakeasy. However, her ability to summon (and expel) the dead is more than just an act.

Winter Magnusson is a notorious bootlegger who’s more comfortable with guns than ghosts—unfortunately for him, he’s the recent target of a malevolent hex that renders him a magnet for hauntings. After Aida’s supernatural assistance is enlisted to banish the ghosts, her spirit-chilled aura heats up as the charming bootlegger casts a different sort of spell on her...

On the hunt for the curseworker responsible for the hex, Aida and Winter become drunk on passion. And the closer they become, the more they realize they have ghosts of their own to exorcise… 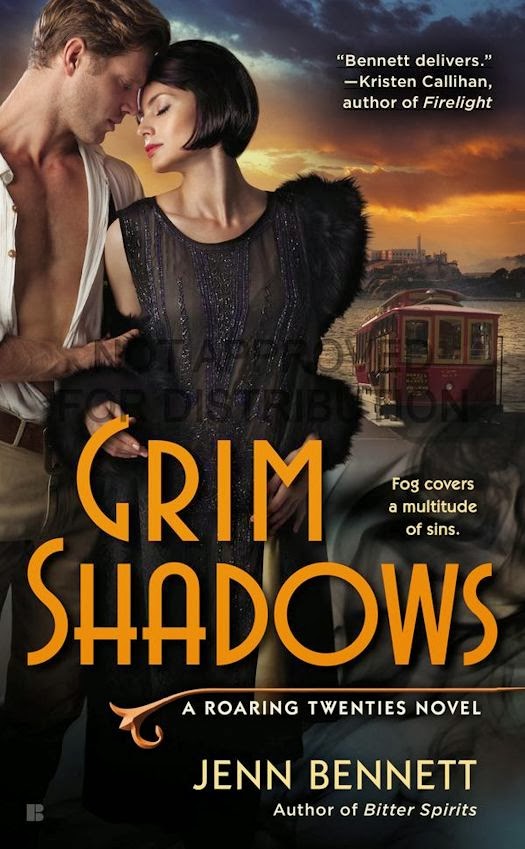 It’s the Roaring Twenties in foggy San Francisco. Prohibition is on, inhibitions are low, and dark magic is rolling into town…

Archaeologist Lowe Magnusson is packing something everyone wants. The djed amulet, a priceless Egyptian artifact, will fetch Lowe a hefty paycheck from one of San Francisco’s wealthiest. But when the handsome Swede runs into his patron’s uptight daughter, what he once considered easy money becomes maddeningly complicated…

Cursed with deadly spirits as her constant companions, curator Hadley Bacall must keep calm to hold her dangerous specters at bay and prevent them from lashing out at anything—or anyone. Trouble is, Lowe is driving her crazy, but her father needs the artifact he’s transporting. While Hadley can feel the amulet’s power, she can’t fathom the destruction—or the desire—it’s about to stir up.


You can check out the Arcadia Bell series at Jenn's website here.

Jenn Bennett is the author of the Arcadia Bell urban fantasy series from Pocket Books and the Roaring Twenties historical paranormal romance series from Berkley. Born in Germany, she’s lived and traveled extensively throughout Europe, the U.S., and the Far East. She currently lives near Atlanta with one husband and two very bad pugs.