Exclusive Cover Reveal and Excerpt from The League of the Sphinx: The Purple Scarab by R. E. Preston

Published:
Please welcome Richard Ellis Preston, Jr., writing as R. E. Preston, with the exclusive cover reveal and excerpt from his first YA novel: The League of the Sphinx: The Purple Scarab.  The cover is by Roberto Calas who also created a map and icons that are found in the novel. We also have the first review of novel below! 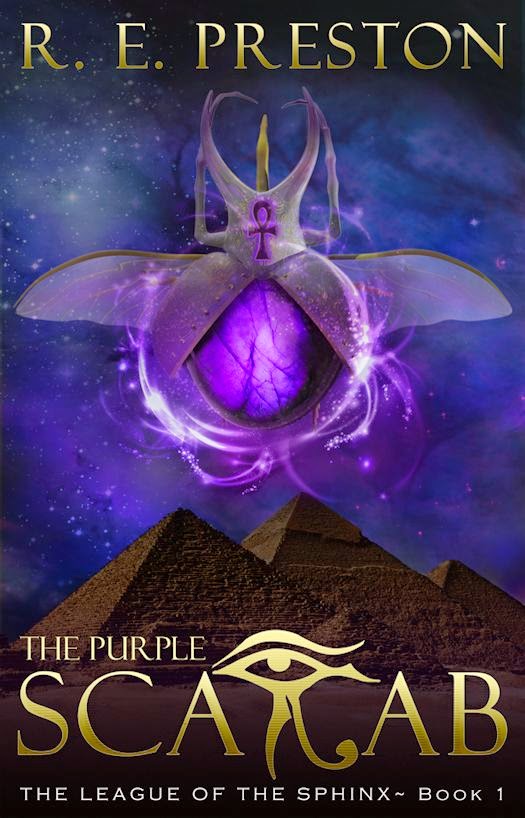 The League of the Sphinx: The Purple Scarab introduces us to R.E. Preston’s new high-adventure, World War Two era series for young adults, written in the tradition of Young Indiana Jones and Bedknobs and Broomsticks. After being trapped in an ancient Egyptian tomb, 15 year old genius Edmund Peabody teams up with Chander Peabody and Amelia Tripp to forge unlikely alliances with a beautiful reanimated mummy and a castle ghost as they attempt to prevent the Nazis from capturing a set of powerful ancient Egyptian scarabs. As England stands threatened, sandstorms rage, biplanes dive and ancient magic is invoked, new and old worlds collide and create new heroes you shall never forget.

The League of the Sphinx: The Purple Scarab is the first book in a promising new YA series by R. E. Preston. Set during World War 2, the protagonist, Edmund Peabody, has recently returned to England after a harrowing adventure in Egypt in which his grandfather, Colonel Percival Peabody, sought a scarab believed to possess magical properties from the tomb of princess Neferu. Their expedition encountered a team of tomb raiders led by Colonel Peabody’s arch-enemy and fellow treasure hunter, Hector Strasser, with disastrous results. Back in England, Edmund, along with his adopted brother Chander, reside in their grandfather’s castle for safekeeping while German bombers target their home city of London. Joined by Amelia Tripp, a close family friend, the trio of adventurous teens must test their courage and their wits to thwart a covert German operation while also eluding the slippery machinations of Strasser.

I thoroughly enjoyed this book, especially the paranormal elements. The fictional historic setting felt authentic both in Egypt and in England. I love the fact that Colonel Peabody’s loyal staff is as diverse as it gets, adding cultural flavor to the bland English countryside. Edmund, Chander, and Amelia are a combination of likeable brainiacs and risk takers who aren’t afraid to act in the face of danger and stand up for their beliefs. There were moments when I was so wrapped up in the story that my heart raced and my fingers twitched in anticipation of turning each page. I read well past my bedtime because I just had to know what was going to happen next. Preston’s story delivers action, adventure and feats of derring do with wallops of adrenaline. The League of the Sphinx: The Purple Scarab is a supernatural thrill fest for the younger set that combines the best elements of Indiana Jones, The Mummy, and the League of Extraordinary Gentlemen. 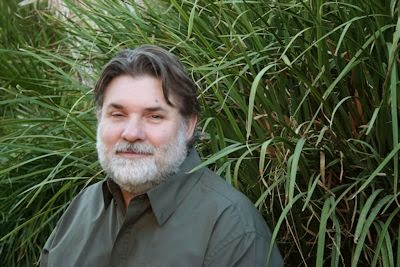 Richard Ellis Preston, Jr. grew up in the United States and Canada but he prefers to think of himself as British. He attended the University of Waterloo where he earned an Honors B.A. in English with a Minor in Anthropology. He has lived on Prince Edward Island, met the sheep on Hadrian’s Wall, eaten at the first McDonalds in Moscow, excavated a 400 year old Huron Indian skeleton and attended a sperm whale autopsy. The Purple Scarab is the first book in his new League of the Sphinx YA adventure series which he writes as R.E. Preston. Romulus Buckle & the City of the Founders, Romulus Buckle & the Engines of War and Romulus Buckle & the Luminiferous Aether are the first three installments in his steampunk series, The Chronicles of the Pneumatic Zeppelin. His short story, “An Officer and a Gentleman,” is a prequel set in the same steampunk universe. He currently resides in California.

PROLOGUE: in the valley of the kings

Published:
New Indie Collective Publishing house WESTMARCH PUBLISHING is running a BOOK GIVEAWAY on TWITTER! 13 author-signed paperbacks are the prize for a Continental USA Twitter Follow or Re-Tweet! An International/non-contiguous state winner receives a choice of one of three digital (.mobi) Westmarch novels. (The Westmarch Giveaway is open Nov 6 –Nov 27, 2014.)

You can ENTER the GIVEAWAY HERE: http://westmarchpub.com/Raffle.aspx or just click on the image! 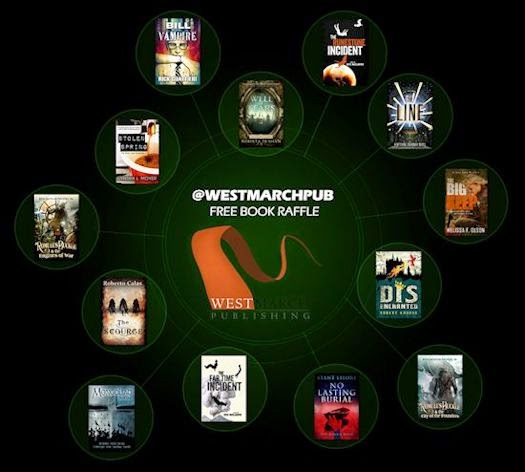 Hi Sally and fans of THE QWILLERY! Thanks for helping us get the word out on Westmarch Publishing! Westmarch was founded in March 2014 as an independent Publisher/Fiction Authors’ Collective. Our members actively support each other throughout all phases of independent book production, including development editing, copy editing, proofreading, beta reading, cover art, formatting, public relations, marketing and more. This model takes an immense amount of pressure off of the independent author trying to wear all of the hats in the book-creation-to-market process and allows him/her to focus more on their own writing. It’s a non-profit organization, so outside of a small membership fee for incidental expenses (such as purchasing ISBNs) every author entirely owns their own creative product and keeps their profits (hey, we are writers, so ‘profit’ is a sketchy word) in return for donating their skill and expertise in book production to the other members. Westmarch is not looking for new members right now, but we may in the future.

So far this production model has proven to be very effective, and a number of full-length novels and short stories have already appeared under the Westmarch Publishing banner. We have a lot of new projects coming up in the docket that we’re really excited about. That’s why we’re doing this contest – to celebrate our new venture and spread the word about our great titles!

If you’d like to check out Westmarch Publishing and meet the Westmarch authors, kindly head over to our home page here http://westmarchpub.com/

And please do enter the Twitter Book Raffle – we’d love to have you follow @WestmarchPub! The paperback raffle is Twitter only and Continental USA residents only, but international/non-contiguous state entries can win their choice of one of three .mobi novels (Select from The Scourge, The Big Keep or Mercury Revolts.) Westmarch will be running plenty of giveaways in the future that encompass more formats. Thanks for your support!

Good Luck to you all! 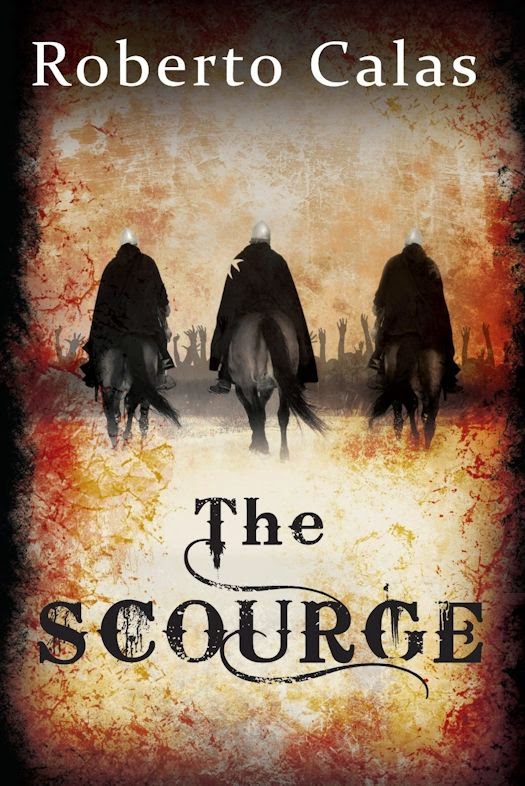 God has forsaken this land.

A mysterious plague descends upon 14th century England, ravaging the country and trapping the souls of the afflicted in eternal madness. The feudal hierarchy--and even the church itself-- slowly crumbles as the dead rise to feed and the living seek whatever shelter they can. The bishops of England call for calm and obedience, but one man isn’t listening.

Sir Edward of Bodiam has been separated from the woman he loves and nothing on heaven or earth can stop him from seeking her out.

Edward and two of his knights travel through the swiftly changing landscape of England, a countryside now overrun by the minions of hell. The knights encounter madness, violence, and sorrow, but Edward fights his way ever deeper into the thickening darkness of unholy terror.

Roberto Calas brings you along on a dark, historical tale full of love, death, and black humor. Follow Edward as he journeys to save his wife, his kingdom, and his very soul. 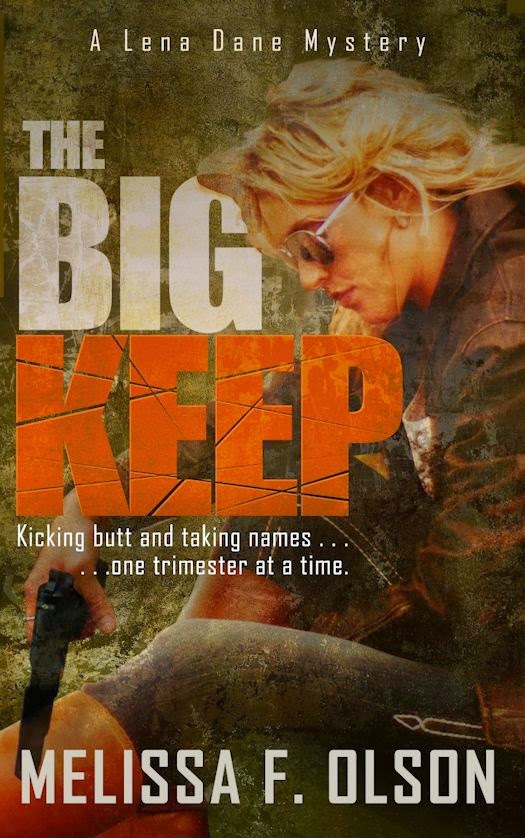 Former Chicago cop Selena “Lena” Dane has been going through the motions at her private investigation agency for years now. But then Lena learns that she’s unexpectedly pregnant just as she takes on a heartbreaking new client: Nate Christianti, a fourteen-year-old boy in search of his biological father, Jason.

Jason’s disappearance isn’t as clear-cut as everyone had thought, and Lena will need to follow his path of destruction halfway across the country to find Nate some answers. Along the way, however, Lena attracts the attention of a killer who’s willing to stalk her all the way back to Chicago to make sure she drops Nate’s case.

To protect the boy, the baby, and herself, Lena must find the killer – or die trying. 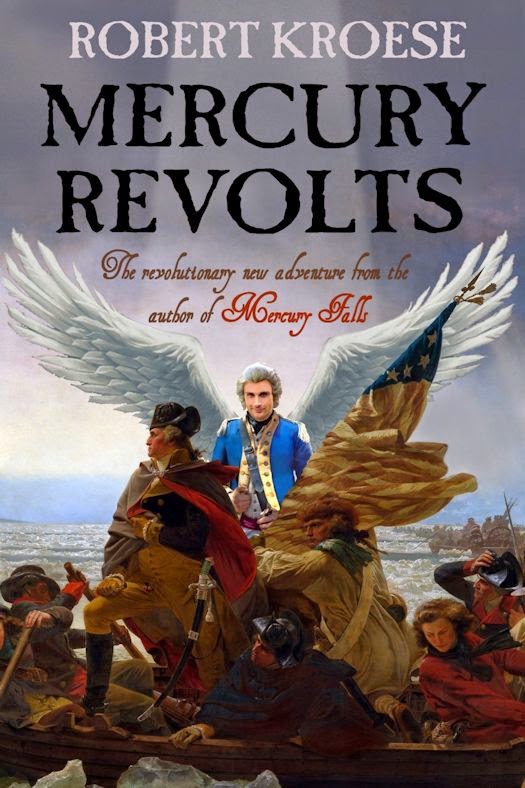 After a lowly software tester named Suzy Cilbrith uncovers evidence of a vast government conspiracy, she turns to a fringe reporter named Eddie Pratt for help. Far from dismissing her wild claims, Eddie reveals that things are even worse than they appear: the U.S. government has been infiltrated by angels, who are attempting to bring about Heaven on Earth - no matter the cost.

Only one angel knows the secret to exposing the cabal: the rogue cherub known as Mercury. But when Mercury learns who is behind the cabal, he realizes he's going to need a lot of help. Old enemies become allies, old friends become bitter enemies, and as competing plots for world domination unfold, it isn't always clear which is which. MERCURY REVOLTS is the fourth book by Robert Kroese featuring the wise-cracking, anti-authority angel Mercury.

MERCURY REVOLTS takes place after the events of MERCURY RESTS, but is a standalone story that can be enjoyed whether or not you've read the other books.