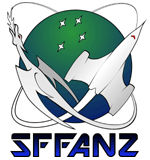 The winners of the 2017 Sir Julius Vogel Award have been announced by the Science Fiction and Fantasy Association of New Zealand (SFFANZ) during LexiCon 2017 at the Suncourt Hotel Taupō, New Zealand.