The Qwillery | category: Spirits From Beyond

Review: Spirits From Beyond by Simon R. Green 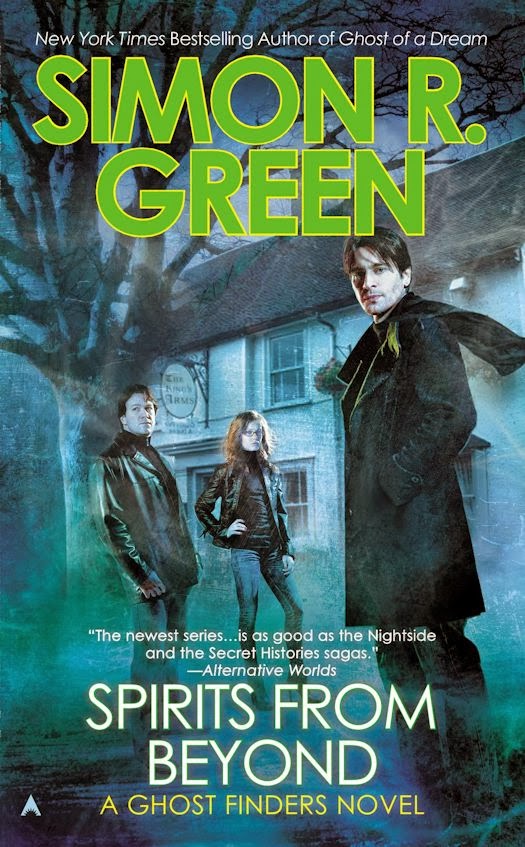 THE NEW GHOST FINDER NOVEL from the bestselling author of the Nightside and Secret Histories series...

Meet the operatives of the Carnacki Institute—JC Chance: the team leader, brave, charming, and almost unbearably arrogant; Melody Chambers: the science geek who keeps the antisupernatural equipment running; and Happy Jack Palmer: the terminally gloomy telepath. Their mission: Do Something About Ghosts. Lay them to rest, send them packing, or just kick their nasty ectoplasmic arses…

Their latest assignment takes JC and the team to a small country village, site of a famously haunted inn. At first, JC thinks that the spirits in the King’s Arms are more the stuff of urban legend than anything that needs the Ghost Finders’ expertise. Then one story rings true: the tale of a traveler trapped by an unusual thunderstorm who retired to her room for the night—and vanished.

As the team investigates, they are forced, one by one, to face some hard truths about themselves, their relationships, and the haunting itself—truths that may push Happy Jack over the edge into the madness that he has always feared...

Ghost Finders is a paranormal series by Simon R. Green that takes place in modern-day England. Spirits From Beyond is the fourth book, and my first read, in Green's series. I was a little nervous about starting a book so far in a series, but Green does offer a page at the beginning of the book explaining what has already taken place in the series. Granted, there is only so much he can tell us in a page, but I have to commend him for offering it, as most authors make the reader figure things out as they read the book. I also, I feel I should mention, this is the first paranormal novel I've read, so my review is only based on this book and not on a wealth of information on the genre from past books.

The book has a nice mixture of humor and frightening moments, which I think is needed as it gives the reader time to cool down after a particularly descriptive passage in the book. As an added bonus for readers who may be new to the genre, the book takes place in modern-day England, so there is plenty of British humor and slang to keep you entertained.

The first half of the book deals purely with events that took place in previous books. This is the first area of trouble for a new reader. Though Green does a great job of telling us what has happened before-hand I felt he spent too much of the book focused on past events. The first part of the book is heavy on dialogue, which slows the pacing of the book way down. Readers following the series from the beginning probably won't mind, as they are familiar with the world, characters and overall plot. The second half of the book deals with a new case of a haunted inn, which helps to ramp up the action and pacing of the book.

Green does a great job writing action and suspense while also adding in the needed horror aspects and humor. It's a fine balancing act to be able to do all of that without throwing a reader out of the book. My only complaint is when his characters came across several obstacles while battling the dark forces in the inn, and it appeared as if there was no way to escape or win, a character pulled out a literal holy hand grenade to defeat the challenge perfectly at the last second. For me, it felt like a bit of a cheat.

Spirits From Beyond is a fun book in the middle of an ongoing series, however, I would caution readers who would like to read the book to start at the beginning of the series so they can avoid any confusion. I would recommend Spirits From Beyond to anyone who has already read the previous books in the series, or anyone that enjoys witty British dialogue.
Source: qwillery.blogspot.com
0 Comments+ Sharelabels (7)Flag
AllAceBook ReviewsBranniganGhost FindersSimon R. GreenSpirits From Beyondreview