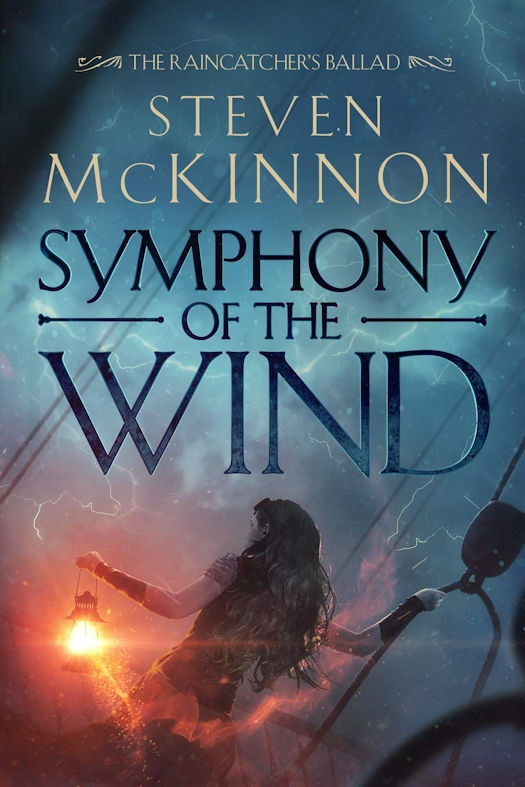 Longlisted for the Booknest 2018 Fantasy Awards - Best Self Published Fantasy

A bounty hunter with a death wish. A girl with fearsome powers. A kingdom on the brink of destruction.
Serena dreams of leaving her unforgiving desert home far behind in her very own airship. But when an assassin's knife meant for Serena kills her friend instead, the rebellious orphan ventures into the corrupt heart of the kingdom to discover who put a price on her head. With each new turn, she edges closer to uncovering the awful truth… And the mystical powers brewing deep within her.

After his fiancée’s death, soldier-turned-bounty hunter Tyson Gallows is eager to sacrifice his life in the line of duty. When a foreign enemy assassinates a high-ranking official, he vows to bring them to justice. On the hunt for a killer, Gallows exposes a sinister plot that proves his fiancée’s death was no accident.

Driven by revenge, Serena and Gallows must join forces to take down the conspiracy before the kingdom falls to ruin.

Symphony of the Wind is the first book in a gritty epic fantasy trilogy. If you like hardened heroes, bloody action, and dark magic and monsters, then you’ll love Steven McKinnon’s visceral adventure.

Buy Symphony of the Wind to climb aboard a brutal, breathtaking thrill ride today!

I have read a number of very positive reviews about Symphony of Wind and it has made into the finals of the SPFBO so I was really expecting to like it. Unfortunately, I just couldn't connect with either the characters or the plotline. Part of the book description on the back cover of the novel says this

If you like hardened heroes, steampunk airships, and dark magic and monsters, then you’ll love Steven McKinnon’s visceral adventure.

I like hardened heroes, steampunk airships, dark magic, and monsters so I was sure this would be a good fit for me. I have come to realise that I don't like them all together. I found the steampunk setting mixed with what read like a sword and shield fantasy quite jarring. I think that McKinnon was trying for a very complex epic fantasy but sometimes less rather than more gives you a winner. There were too many elements from other genres all mixed together into one big soup of a story - the steampunk ships, the magic, the wars, the government conspiracy, the prostitute with heart, and on and on.

Had their been fewer characters and perhaps more explanation of the society and culture at the beginning I might have liked the story a bit more. I re-read the first four chapters more than once because I couldn't figure out what was going on. This is never a good sign for me. I need a hook to grab me in, especially when the main character is a young teenager. One of the other books I read for this SPFBO had a teenager for a lead character and I made the decision that there has to be something more adult or 'special' about teenage lead characters for me to enjoy reading youth fiction. In the case of Symphony of Wind Serena was quite immature. In one scene she has just discovered that one of her friends has been murdered - it was supposed to be her that died - and then next minute she is walking down the street with hardly a care in the world. There was a very similar reaction in an earlier scene where members of her Raincatcher crew are killed in a freak accident right in front of her. It was Serena's self involvement and lack of empathy that made her rather unlikeable. While she did mature a bit over the course of the story my interest in her had already waned.

The other main character Tyson Gallows was older but not what I would say much wiser. He was quite two dimensional and spent much of the book reliving memories of the time when his fiancée was still alive. He was cast as a bounty hunter but he came across too soft-hearted for that role and not that heroic. There were a number of other characters that shared the plot with Serena and Gallows. In fact, there were quite a few POVs and you had to really pay attention to who was speaking as the interchange between the characters was quite quick.

This is McKinnon's first novel so hats off to him for being so ambitious as not only is the story complex but it is also very long (a whopping 660 pages). I think the story could have benefited if the plot focused on a few key characters and there was a tiny bit more world building at the start. Without this however, I struggled to finish this tome and due to the complexity supported by weak characters I am going to have to give Symphony of Wind a 5/10.