The Qwillery | category: The Fallen Empire 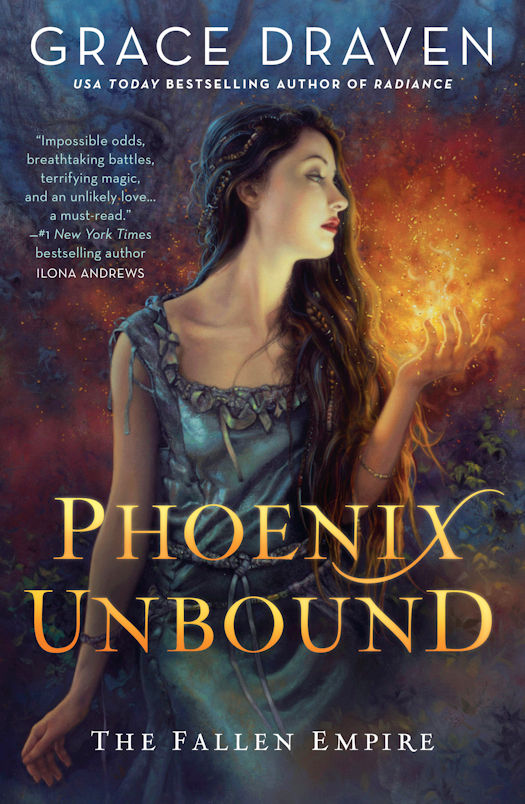 A woman with power over fire and illusion and the enslaved son of a chieftain battle a corrupt empire in this powerful and deeply emotional romantic fantasy from the USA Today bestselling author of Radiance.

Every year, each village is required to send a young woman to the Empire’s capital–her fate to be burned alive for the entertainment of the masses. For the last five years, one small village’s tithe has been the same woman. Gilene’s sacrifice protects all the other young women of her village, and her secret to staying alive lies with the magic only she possesses.

But this year is different.

Azarion, the Empire’s most famous gladiator, has somehow seen through her illusion–and is set on blackmailing Gilene into using her abilities to help him escape his life of slavery. Unknown to Gilene, he also wants to reclaim the birthright of his clan.

To protect her family and village, she will abandon everything to return to the Empire–and burn once more.

Had Grace Draven's name not been on the front cover I would not have guessed this is one of her novels....well at least not for the first few chapters. Gilene and Azarion are both victims who had endured rape and torture at the hands of the Empire. The Krael Empire is not a typical setting for a Draven novel and most certainly, the systematic rape and torture is not typical of what happens to her characters. Sure, her characters have endured hardship or isolation but never anything to this extreme, especially for the story's hero Azarion. Before you start to this think that this story is something completely different to Draven romance let me reassure you as Draven doesn't focus unduly on what Azarion or Gilene have experienced as captives of the Empire. Azarion and Gilene's memories of their treatment is not too graphic and Draven successfully uses these scenes for character development, possibly also as a backdrop for other books of the series.

Phoenix Unbound is set in, what best can be described, in a time period similar to the Roman Empire where the pagan gods are worshipped and the rich rule by controlling the populace through blood sport and ritual killing. Draven's Krael Empire is not too different to periods of our own history, just with a little more magic. This makes it easier to relate to her characters and could also make you believe that Gilene and Azarion were from a page in history rather than the pages of a fantasy novel.

Draven has a lyrical or poetic writing style and the latter scenes between the two lead characters are written to be read like one long love letter. One of the lines that reminded me that I was reading a Draven novel occurred when Azarion sees Gilene for the first time after nearly a year. He calls her the 'wife of my soul'. For me this is typical Draven. At its core Phoenix Unbound is romance but not as obviously romance as some of her other novels. I am very finicky about what romance I enjoy. I have to say I read quite a bit of that genre but I invariably don't enjoy it, especially when there is a lot of sex. I really enjoyed Draven's Master of Crows series and if she continues to build the Fallen Empire series on the foundation of this first novel then I think I may enjoy it more.

Draven has such beautifully illustrated novels - Masters of Crows is beautiful. The cover of Phoenix Unbound is absolutely gorgeous and I have spent quite a bit of time staring at it. She is very lucky to have someone to create such lovely illustrations.

This may not be a novel to suit every lover of romance but if you like something a little different and not a lot on the hot and steamy then this may be the book for you.
Source: qwillery.blogspot.com
0 Comments+ Sharelabels (7)Flag
AllAceBook ReviewsGrace DravenMelaniePhoenix UnboundThe Fallen Empirereview