The Qwillery | category: The Fortress

Interview with S. A. Jones, author of The Fortress

Published:
Please welcome S. A. Jones to The Qwillery as part of the 2020 Debut Author Challenge Interviews. The Fortress is published on March 17, 2020 by Erewhon. 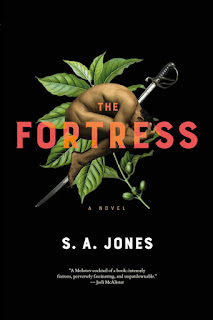 S. A.:  I don’t remember this incident but it is part of my family folklore. When I was a toddler I was an obsessive scribbler. My parents would make me repeat “I only write on paper. I only write on paper” to reinforce that I was not to draw on any other surface.

They had their kitchen decorated with wallpaper.

You can guess what happened.

The first writing that I remember was a series of illustrated stories I did for my sister Bec when I was twelve and she was two. The stories were called Octavia, Gillian and the Acqua-Gumpoo. They were about a misunderstood sea monster with bad hair trying to find his place in a hierarchical, snobbish court. So totally not autobiographical.

S. A.:  I am a plotter. That said, the process of writing often reveals developments that I hadn’t consciously thought of until I start to write. So there is an extent to which writing and plotting are symbiotic.

S. A.:  The terror of the blank page. Once I start writing I can be immensely productive in a fairly short time span. But surmounting the fear that I am composed of nothing but airy, wordless spaces is a constant battle.

S. A.:  I cannot remember a time when I wasn’t compelled to write so it is hard to isolate an influence. Despite my working class background my family has always encouraged the belief that reading and writing are worthwhile pursuits so I’ve been fortunate in that regard.

Time and money definitely influence the kind of books I write. There are a couple of research-intensive books I’d love to write but I simply don’t have the resources to pursue them.

S. A.:  Your Misogynist Boss Gets His

TQ:  Tell us something about The Fortress that is not found in the book description.

S. A.:  The original inhabitants of The Fortress, the Vaik, are genetically improbable: women of colour with blonde hair. I was interested in the idea of a sovereign state governed by women whose physicality our culture does not code as powerful.

In my original draft all of the Vaik were women of colour with blonde hair. As I worked through the story I realised that what characterised Vaikness was not biological or racial but psychological: a total immunity to any sense of gendered inferiority. Being Vaik is a state of mind.

TQ:  What inspired you to write The Fortress?

S. A.:  Breathing while female

TQ:  What sort of research did you do for The Fortress?

S. A.:  I have observed corporate life for a long while now. Jonathon is an extreme example but he is a type of successful, wealthy, entitled man with very little consciousness about how power flows between him and other people. He isn’t evil, he’s just snug and comfortable in a world that works very well for him. Why would he poke and pull at his world to see what it is made of? Whether it is fair or just?

I majored in history and minored in politics at university so I’ve always been interested in how societies govern themselves and the narratives that create a sense of shared purpose and identity.

TQ:  Please tell us about the cover for The Fortress.

S. A.:  The cover is by Marina Drukman. I think it is stunning. It captures the raw physicality of the book while showing Jonathon’s power and vulnerability.

I have very little talent for visual design (when my ten year old daughter and I have ‘drawing dates’ she is tactful about my woeful efforts). I’m immensely grateful to Erewhon for engaging Marina because she grasped the essentials of the book and translated them into her medium. I’m fascinated by ekphrasis so the cover reveal is always a high point in the publishing process for me.

TQ:  In The Fortress who was the easiest character to write and why? The hardest and why?

S. A.:  Jonathon was probably the easiest character because I understand him. Getting into his head and the rhythm of his speech came naturally.

Ulait was harder because her experience of girlhood is unprecedented. Ulait’s birthright is sexual pleasure and agency. She decides when and with whom she will be physically intimate. She has enormous physical freedom and no fear of men. Yet in other ways her life is quite restricted. She lives entirely within the geographical confines of the Fortress. She is drilled in Vaik narratives to the point where she can’t even draw what she wants without being chastised for not sticking to Vaik myth. She cannot have an equal relationship with a man because that does not exist in Vaik society.

TQ:  Does The Fortress touch on any social issues?

S. A.:  It doesn’t so much touch on them as give them a bear-hug and take them home for tea: gender, power, consent, subjectivity, pleasure, capitalism, justice, social cohesion…

TQ:  Which question about The Fortress do you wish someone would ask? Ask it and answer it!

Q. How does it feel to win the Man Booker prize for The Fortress?

TQ:  Give us one or two of your favorite non-spoilery quotes from The Fortress.

S. A.:  This is creed sets out the principles for the four tenets of Vaik society which are work, history, sex and justice.

A moving body is a creative body. It produces the food on our plates, [LG1] the walls that protect us and the art that delights us.

We created and recreate ourselves by standing apart. We honour they who won us our solitude, but we are not petrified.

Pleasure consists in the freedom to, and the freedom from, and every Vaik will herself determine in what measure these things are best.

We are instruments of the sovereignty of all women, and do not shrink from the sacrifice this entails.

S. A.:  I’m currently working on a book about a truck driver named Brian who is accidentally turned into a vampire by a drug-running bikie clan. One of the side-effects of his vampirism is that it cures Brian’s dyslexia. So finally we have an answer to the question is it better to be a blood-sucking fiend or go your whole life and not read Middlemarch? 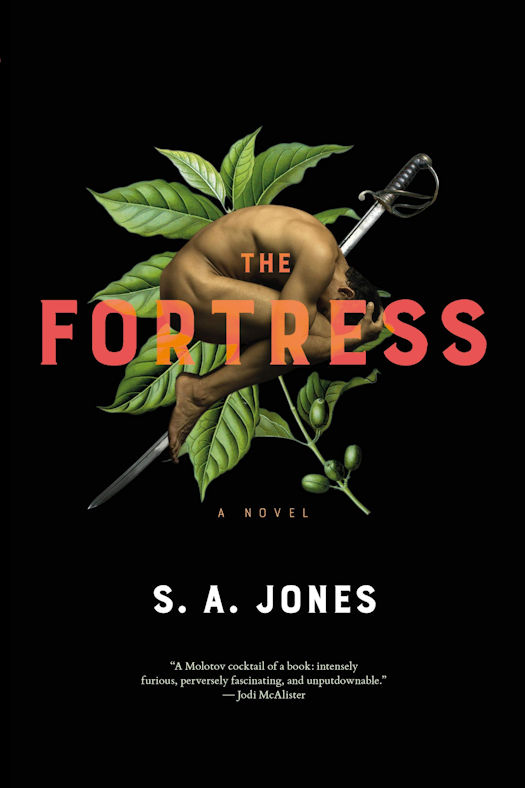 Jonathon Bridge has a corner office in a top-tier law firm, tailored suits and an impeccable pedigree. He has a fascinating wife, Adalia, a child on the way, and a string of pretty young interns as lovers on the side. He’s a man who’s going places. His world is our world: the same chaos and sprawl, haves and have-nots, men and women, skyscrapers and billboards. But it also exists alongside a vast, self-sustaining city-state called The Fortress where the indigenous inhabitants—the Vaik, a society run and populated exclusively by women—live in isolation.

When Adalia discovers his indiscretions and the ugly sexual violence pervading his firm, she agrees to continue their fractured marriage only on the condition that Jonathan voluntarily offers himself to the Fortress as a supplicant and stay there for a year.

Jonathon’s arrival at the Fortress begins with a recitation of the conditions of his stay: He is forbidden to ask questions, to raise his hand in anger, and to refuse sex. Jonathon is utterly unprepared for what will happen to him over the course of the year—not only to his body, but to his mind and his heart.

This absorbing, confronting and moving novel asks questions about consent, power, love and fulfillment. It asks what it takes for a man to change, and whether change is possible without a radical reversal of the conditions that seem normal. 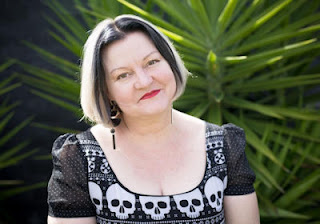 S. A. Jones is a Melbourne-based novelist and essayist whose work has been published in venues including The Guardian. She holds a PhD in history and has been a senior executive and a Shadow Ministerial staffer. In 2013 she was recognized by Westpac and The Australian Financial Review as one of Australia's 100 Women of Influence for her public policy work. The Fortress is her third novel, and her debut in the United States.