The Qwillery | category: The Spider

Review: The Spider by Jennifer Estep 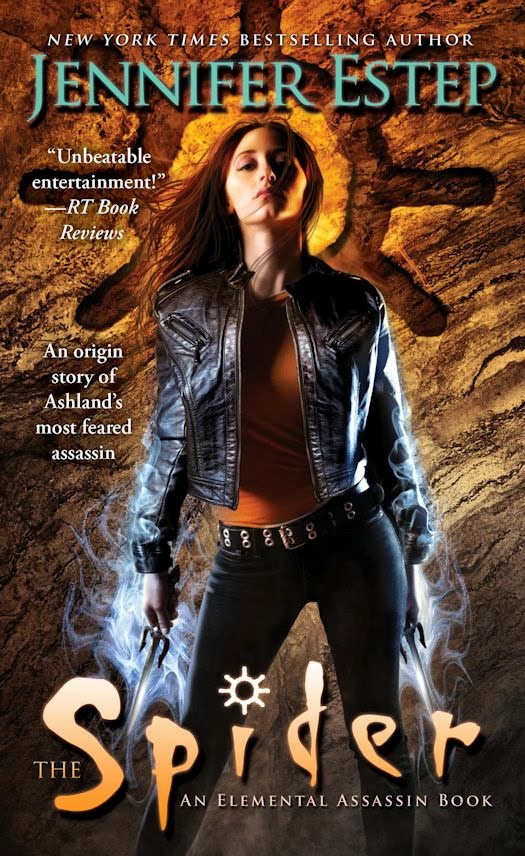 How did I end up in a career where I always have blood on my hands? Well, let me tell you a story about an assassin who thought she could do no wrong. . . .

Ten years ago. A blistering hot August night. I remember like it was yesterday. The night I, Gin Blanco, truly became the Spider. Killing people is what I do best, especially now that I’ve honed my Ice and Stone magic. But back then, I had yet to learn one very important rule: arrogance will get you, every single time.

This particular job seemed simple: murder a crooked building contractor with ties to ruthless Fire elemental Mab Monroe. My mentor, Fletcher Lane, had some misgivings, but I was certain that I had the situation under control . . . right up until I exposed my weaknesses to a merciless opponent who exploited every single one of them. There’s a reason assassins aren’t supposed to feel anything. Luckily, a knife to the heart can fix that problem, especially when I’m the one wielding it. . . .

The Spider is Jennifer Estep’s tenth novel in the Elemental Assassin series, and the first to go back in the past a revisit a younger, more inexperienced Gin Blanco. I have enjoyed all of the novels to date, especially watching Gin evolve in her relationships with her friends and family. It was fun to see Gin at an earlier age, when she is falling in love and opening up to a world outside the dark shadows where she normally resides.

Estep also does a good job at involving some of her minor characters in the story in a different way than we normally see them. She introduces us to a younger Xavier, right before he becomes a beat copy, Roslyn Phillips before she created the club Northern Aggression, and even sister Bria and lover Owen before they were on Gin’s radar. Estep also shows us more about Gin's foster father, Fletcher Lane (before he was murdered) and Gin’s relationship with her foster brother, Finnegan. As always, it is the relationships that make up the heart of her novel.

But Gin always must face an opponent and in The Spider she believes she has vanquished the bad guy fairly early. As a reader, it was easy to see who really was the antagonist and how that person was able to get so close to Gin without her realizing it. The mystery in the Elemental Assassin books is always secondary to the relationships, and I appreciate that. This is another worthy entry in Estep’s series.
Source: qwillery.blogspot.com
0 Comments+ Sharelabels (7)Flag
AllBook ReviewsDoreenElemental AssassinJennifer EstepPocket BooksThe Spiderreview