Published:
Please welcome Julia Whicker to The Qwillery as part of the 2018 Debut Author Challenge Interviews. Wonderblood is published on April 3rd by St. Martin's Press. 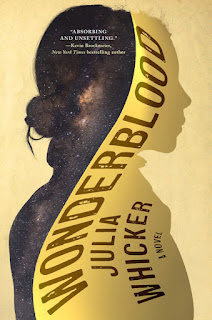 Julia:  I wrote my first short story when I was eleven. My father gave me his old laptop that weighed 10 pounds (it must have been one of the first laptops ever), and I wrote a story about a crystal dome and a beautiful girl. I don't really remember the plot except that it had to do with Atlantis, singing fountains and magical stones. So, pretty much something I'd still write.

Julia:  Definitely a plotter. One of my editors for Wonderblood said he'd never seen such detailed chapter summaries.

Julia:  Sitting down to actually write. I love reading, researching, thinking about writing, and plotting my stories, and I even love writing when I'm actually doing it, but settling into that moment when the words are flowing is difficult for me. I always think I need to read something else or let my story gestate just a bit longer before putting it on the page, but taking the plunge is usually worth it.

TQ:  How does writing poetry affect (or not) your prose writing?

Julia:  I've always been drawn to challenging prose in my reading life, and have felt that my natural talents (if I have any) run toward the crafting of specific sentences (over, say, characterization or plot, even though I try so hard).

Julia:  I'm not actually a regular reader of fantasy fiction -- I read a lot of nonfiction books about strange occurrences and anomalous happenings (such as the collected works of Charles Fort), and I feel these greatly influence my interest in the surreal. I've also been influenced by great writers of historical fiction, like Barry Unsworth, John Banville, and especially Jane Smiley's The Greenlanders, which in my opinion is an overlooked masterpiece. Her ability to capture the daily concerns and lives of people who lived six hundred years ago, rendering their worldview as understandably foreign yet simultaneously relatable to the modern reader, is a true wonder, and inspired a lot of my thinking about how the characters in Wonderblood might exist in their future world.

Julia:  When a girl is captured by a self-styled prophet & warlord, she is thrust into his violent plan. A post-apocalyptic fantasy about religious war & perverse faith.

TQ:  Tell us something about Wonderblood that is not found in the book description.

Julia:  In my mind, Wonderblood was always a book about faith more than anything else. What it means to lack faith, to have it, to have it and lose it or to lose it and regain it. All those iterations are endlessly fascinating to me, so much that what the characters actually believe in (or don't believe in) is less interesting to me than what it feels like to explore the nooks and crannies of faith itself. That's why I have some characters who believe in science, some in magic, some who don't know what to believe and some who discover they should have believed in themselves from the very beginning.

TQ:  What inspired you to write Wonderblood? What appeals to you about writing Science Fiction and in particular a dystopian novel?

Julia:  I think I write fantasy/sci-fi because it's the best vehicle for synthesizing my interests. I love the weird, the strange, the wondrous, and creating a world that doesn't exist is the best way (for me) to explore those ideas. I chose to write a dystopian novel because I've always loved a good apocalyptic disaster, and I had the thought that I should write a book with a double apocalypse. That's why Wonderblood takes place after the world has been destroyed (by the Disease), and before it might be destroyed again (by the lights in the sky). If I write more in the series, which I hope to, readers will get to see the second apocalypse!

TQ:  What sort of research did you do for Wonderblood?

Julia:  Quite a lot. I began by researching prion diseases which contaminate the earth for many many years, I read a lot about Kepler the Renaissance astronomer (and astrologer!) as an inspiration for John the Astronomer, I read about Thelema, a system of magic developed by Aleister Crowley in the early 20th century, about the L.A. magician and rocket scientist Jack Parsons, who supposedly summoned an elemental to become his wife, I read about Tycho Brahe's (another Renaissance astronomer) star-gazing castle, John Dee and his assistant Edward Kelley (more Elizabethan scientist/magicians) and much more. Wonderblood represents a period of time I spent researching the conjunction of science and magic in late 1500s/early 1600s Europe.

TQ:  Please tell us about the cover for Wonderblood.

Julia:  I love the cover! It depicts Aurora, the girl, with her head full of the cosmos, which is beautiful to me because I wanted the cover to convey a sense of utter wonder about the heavens. The religion of the characters is centered on the possibility of salvation descending from space, and I think the cover demonstrates this, as well as asking us to consider the magnitude of our potential aloneness.

TQ:  In Wonderblood who was the easiest character to write and why? The hardest and why?

Julia:  The easiest character to write was John, because he is the most like me. He struggles constantly with his own self-worth, and feels a burning desire to feel faith of some kind but cannot muster it. The hardest character was certainly Mr. Capulatio -- I needed him to be seductive, compelling, obviously monstrous without being a monster, per se, because I did not want to make him a villain in the sense that he is only bad. I wanted readers to eventually come to feel that he has been deluded and misled by his religion, but also that this should not "let him off the hook," so to speak, for his terrible deeds. He is a complicated character!

Julia:  I chose to include the very difficult subjects of implied rape and the abduction of a minor because, as a feminist, I feel that these issues have certainly not been adequately tackled in our current circumstances. Historically (and -- realistically -- in a future dystopian society, as well as in many societies in our world today) young girls are the most marginalized of people, often completely powerless to control their destinies. This is inextricably bound up with others' designs on their sexuality. In Wonderblood, Aurora begins as a helpless captive of her insane brother, is abducted by another powerful man and comes to understand her own power beyond her sexuality: her power as a human being to potentially save other human beings from death. I deeply wanted to write her as a savior, and not because of any "purity" or "impurity" (arbitrarily assigned by those with sexual designs on her) but because of her implicit kindness, empathy, and wisdom.

TQ:  Which question about Wonderblood do you wish someone would ask? Ask it and answer it!

Julia:  Why does the future in Wonderblood (it's set 1000 years in the future) look more like the Renaissance?

After thinking long and hard about what a depopulated, destabilized future U.S. might look like, I kept returning to several key themes: religion, violence, and environmental contamination. I am not a scientist, but I've always been interested in medicine and disease, so after killing off most of the country via disease and rendering much of the land unsuitable for habitation, I wondered what would be left. Fear, mostly! How do we tackle fear in this country? Often through religion, for better or worse. I've long been intrigued by the pre-modern melding of science and magic, a blend that actually makes a lot of sense in a predominantly religious society. If our world ended and the survivors developed a new religion around the world-ending (which they probably would, in my mind) I felt that there would be necessarily tension between religion and science -- this formed the central thesis of Wonderblood.

TQ:  Give us one or two of your favorite non-spoilery quotes from Wonderblood.

"At last they made their camp outside the Cape compound's walls. Mr. Capulatio's carnival was already the mightiest in the land and functioned with a frightening efficiency. His men could raise it entirely in under nine hours. His own giant tent was so large it contained his wagon wholly; he and [Aurora] used the wagon as their bedchamber. Outside, men laid planks for walkways, the merchants and charm-makers pitched their booths, and just as soon as they finished tying down the last tent pegs Mr. Capulatio's new, great flag was hoisted over the encampment. This was a flag of conquering, he mused to her as he watched it unfurl. His chest rose and fell as they stood together in the tent's doorway. They looked out upon the carnival, and farther away they could see the metal spires of the castle beginning to whirl the morning light back to them and all around the land was low and flat, and the air heavy, and beyond that began the pink-blue crescent the sea." -Aurora's impression of Mr. Capulatio's camp at Cape Canaveral.

"There came over him the undeniable impression that all reason was leaking from the world, that he was a faucet, that through his miscalculations all things would slowly but surely upend themselves. What could these lights be, if not the shuttles? It seemed fitting that after decades of failure, John, who had his whole life long desired truth and order, should now be reliant upon a con-man who may well have real visions. Why shouldn't the truth, when it finally came to John Sousa, be revealed by a liar?" -John the Astronomer

Julia:  I hope to write two more books set in the world of Wonderblood, ultimately taking readers to the Mystagogue in Kansas. In addition, I'm currently writing a fantasy novel set in colonial America, just after the Revolutionary War, which deals with evil rocks, Washington DC, virulent rabies and cities of blood.

Julia:  Thank you so much for having me! What fun it was to answer these questions! 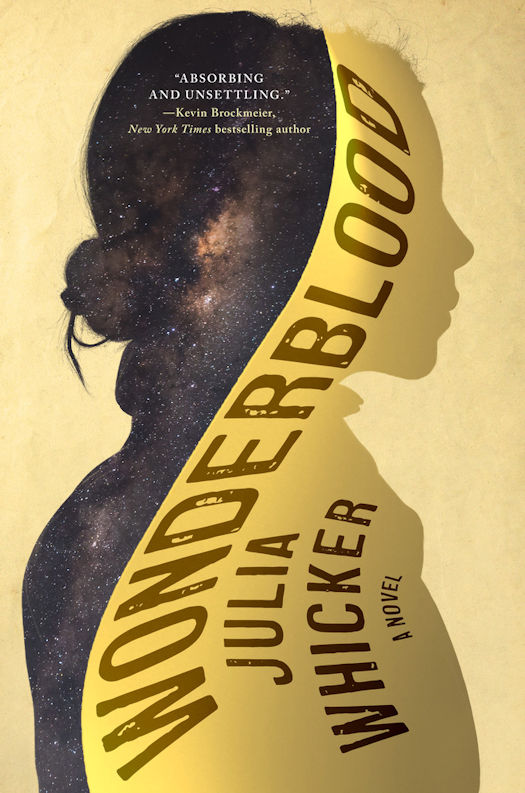 Set 500 years in the future, a mad cow-like disease called “Bent Head” has killed off most of the U.S. population. Those remaining turn to magic and sacrifice to cleanse the Earth.

Wonderblood is Julia Whicker's fascinating literary debut, set in a barren United States, an apocalyptic wasteland where warring factions compete for control of the land in strange and dangerous carnivals. A mad cow-like disease called "Bent Head" has killed off millions. Those who remain worship the ruins of NASA's space shuttles, and Cape Canaveral is their Mecca. Medicine and science have been rejected in favor of magic, prophecy, and blood sacrifice.

When traveling marauders led by the bloodthirsty Mr. Capulatio invade her camp, a young girl named Aurora is taken captive as his bride and forced to join his band on their journey to Cape Canaveral. As war nears, she must decide if she is willing to become her captor's queen. But then other queens emerge, some grotesque and others aggrieved, and not all are pleased with the girl's ascent. Politics and survival are at the centre of this ravishing novel.

Julia Whicker received her MFA at the Iowa Writers Workshop in 2006, where she won both the prestigious Capote Fellowship and the Teaching-Writing Fellowship. She’s had her poetry published in the Iowa Review, Word Riot, and The Millions, among others, and has been nominated for a Pushcart Prize. A version of the first chapter of Wonderblood was published in the literary journal, Unstuck.