Published:
Hello fashionable readers, here's something fun for you!

Fun article:
Murderous Millinery: A brief look at the fashion for feathered hats in the early 20th century 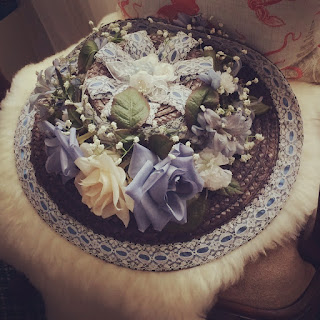 And a companion podcast on the subject:  Murderous Millinery

I do love hats, despite their murderous intentions.

Product links on this blog are usually to Amazon using my associate code. At no additional cost to you this means I get a slight kick back if you make a purchase. Thank you! This allows me to continue to produce this blog without sponsors.
Source: retrorack.blogspot.com
1 Comments+ Sharelabels (5)Flag
All1800shathat makinghatsvictorian fashion

Gail Carriger is Purging... Gloves? All About Vintage Gloves

Published:
I have a vast glove collection, Fashionable Reader. My hands are just small enough to wear vintage gloves (well, some of them) and I adore gloves. I wear them for all my events.

I have perpetually cold hands, you see. Even if it's warm out, my hands tend to be cold. I come by my bad circulation naturally, thank you very much.

Anyhoo, I also believe that gloves keep me from getting sick from glad-handing at events. So you will almost always see me wearing them. 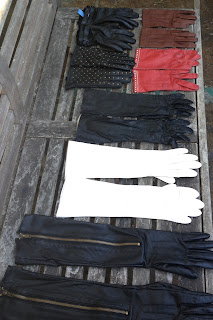 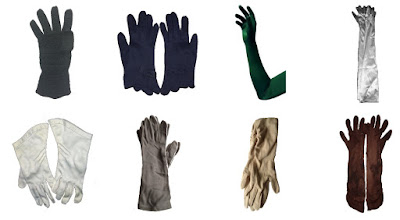 Here are some of the ones I've decided to get rid of. They will be part of goodie boxes via the Chirrup.

As you can see, both the green one I'm wearing in the first picture and the white ones in the second are on the chopping block.

I'll be giving them away inside various Chirrup goodie boxes over the next year or so. You have to join to enter.

And now, a retrospective on gloves...

For Mrs Loontwill in her debut days...

For Monique in the Finishing School series...

For Ivy in the Parasol Protectorate series...

For Primrose in the Custard Protocol series...

"It is not admissible to try on kid gloves in a store. After buying a pair, ask for the glove-stretcher, (which they keep in all good shops, for the convenience of customers,) and then stretch the gloves upon it, unless you have a glove-stretcher at home. This will render them easy to put on when you take them into wear."
~ The Ladies' Guide to True Politeness and Perfect Manners or, Miss Leslie's Behaviour Book
by Eliza Leslie (American 1864)

Product links on this blog are usually to Amazon using my associate code. At no additional cost to you this means I get a slight kick back if you make a purchase. Thank you! This allows me to continue to produce this blog without sponsors.
Source: retrorack.blogspot.com
0 Comments+ Sharelabels (12)Flag
All1800s1830s1880s1890s1950scolor glovescrocheted glovesgiveawayglovesleather glovesvintage gloveswhite gloves

"And yet here he was, if one could credit one's senses, about to take part in a fancy-dress ball, a form of entertainment notoriously a testing experience for the toughest. And he was attending that fancy-dress ball, mark you—not, like every other well-bred Englishman, as a Pierrot, but as Mephistopheles—this involving, as I need scarcely stress, not only scarlet tights but a pretty frightful false beard."
~ Right Ho, Jeeves by P. G. Wodehouse


Fancy dress costumes were very popular in the Victorian era, Fashionable Reader. There were follies, masquerades, fancy dress balls, not to mention a variety of other events that might call for a costume of some kind or another. I feature a fancy dress ball in the Finishing School books and I'm contemplating what might happen if Lord Akeldama decided to throw one. However the Victorian approach to fancy dress was quirky to say the least. Here are a few examples...


Classic jester costume, also the domino were both, extremely popular in the Victorian era.

via Bizarre Victorian fact of the day…

A traditional Halloween custom which was practised across Britain (particularly in rural areas) in the Victorian period was for groups of people (of all ages) to don strange costumes and go door-to-door in the hopes of receiving food or gifts, or of causing a bit of mischief. This custom had a huge number of regional variations. On the Shetland Islands the ‘skeklers’ wore tall pointy hats and voluminous costumes made of straw. In Montgomeryshire in Wales men dressed themselves as ‘gwrachod’ (an ancient Welsh hag-like monster) by putting on ragged clothes, sheepskins and masks. They went through their neighbourhood frightening children and being rude to adults. Young people in Glamorgan cross-dressed and went from house to house singing riddles, while ‘guisers’ in Scotland with masked, blackened, or painted faces chanted rhymes like:

Tramp, tramp, the boys are marching
We are the guisers at the door,
If you dinna let us in, we will bash yer windows in,
And you’ll never see the guisers any more.

Aristocratic Victorians loved to play the poor, particularly the romanticized country poor. In addition to gardeners, milk maids, peasant girls, shepherds and shepherdesses were quite popular.


There was also and interesting take on cross dressing that occasionally appeared. There's a certain romantic notion and of the beautiful page boy, almost gender neutral and certainly gender bending that made this archetypal character open season for men or women. Maxfield Parrish capitalized on this with some of his work using a female model for many of his pages and princes etc...


Objects were also open season. And an idea I kind of love. Above we see a young lady dressed as a rose garden, or rose bouquet. Bellow is one dressed as a... waste basket. I may have to put that into one of my stories.


Other cultures were also popular, as were historical figures. Always keeping in mind the Victorian silhouette. You'll not that while masks were popular grotesque make up was not. Victorians might theme a masquerade to a particular place or time period or even a famous author, Shakespeare characters, for example, might be a theme.


I have a lot of fun imagining how a costume party in my steampunk Victorian era might look. Can you imagine people coming dressed as trains, or dirigibles? Or werewolves or vampires for that matter. I may have to write a short story about this at some point.

And something a little more to my personal taste...

Product links on this blog are usually to Amazon using my associate code. At no additional cost to you this means I get a slight kick back if you make a purchase. Thank you! This allows me to continue to produce this blog without sponsors.
Source: retrorack.blogspot.com
0 Comments+ Sharelabels (11)Flag
All1800s1860s1880s1890s1930sHalloweencostumesfancy dressgail carrigersteampunkvictorian fashion

Fans For Sophronia ~ A Historical Retrospective from Gail Carriger