Published:
In here is another little ode to a long lost closet items Fashionable Reader.

I will admit, when I bought this suit I imagined I would wear it more because it has versatility in it's favor. 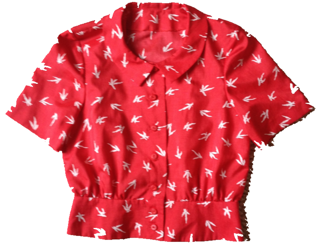 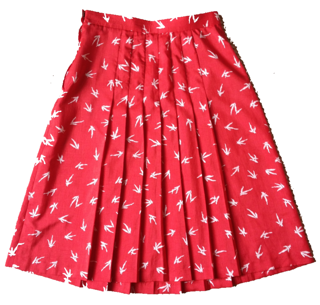 It just really looks like my kind of thing. The color is very much the perfect ride for me, and I like the clean white pattern. I think of it as birds, or maybe bird feet, but I think its leaves of some kind. 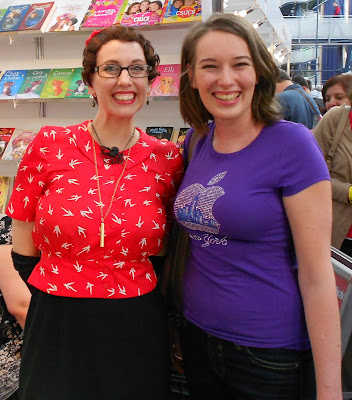 It is wonderful and very light weight. I did take it to Europe with me, and I didn't wear it. But as you can see the top never really did fit properly. After my breast reduction, I thought it would fit better. But it doesn't. 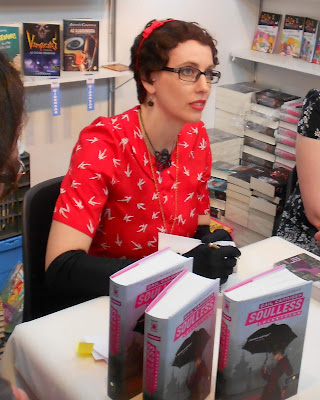 Trying it on again only made me realize how much I love the color and hate the fit. I thought perhaps that I might keep the skirt part, but even it doesn't really fit my hips well anymore since it is raw silk it has almost no stretch to it so both of them are going the way of the dodo.

What?
Two piece cherry red suit with white birds, peplum top with button front, pleated fitted skirt, silk.
Why?
Too tight at waist, shirt is really for someone with a short waist, and smaller boobs. Doesn't pack well.

Something similar for Prudence in the Custard Protocol Books...

Product links on this blog are usually to Amazon using my associate code. At no additional cost to you this means I get a slight kick back if you make a purchase. Thank you! This allows me to continue to produce this blog without sponsors.
Source: retrorack.blogspot.com
0 Comments+ Sharelabels (8)Flag
All1890s1980spattern dresspeplumredred and whitesilksuit

Published:
So this was the first eShakti dress that I purchased after the Rack Reduction. It's a little bit big and I need to work on the measurements that I give them if/when I order from them again. 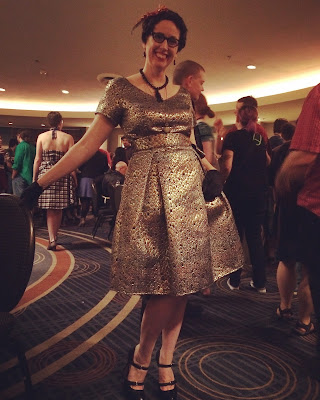 I ordered this just after the holiday season because I love the fabric. It's better in person but it has a peacock component with blues and pinks within the gold.  It's no loner available. It came with a sash belt and pockets (!) and I had the neckline altered to a wide V and short sleeves added because I wanted it to look more 1950s like this:


I'm wearing it with short beaded cotton gloves (because of the heat in Kansas City) similar $15 in satin. 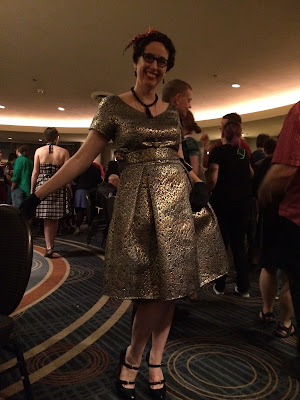 The multi-colored hair flower is a gift (similar $10) and the shoes are modern MJ almond toe pumps (similar $30). I love them but they are wicked painful. The tassel necklace is a modern jet piece that I love (similar $17). I got it from Dark Garden years ago. I have a THING about tassel jewelry.


Retro Rack is also on facebook where I post additional images and fashion thoughts.
You can visit the following shopping lists: Travel Dork, My Steampunk, My Wardrobe.
Product links on this blog are usually to Amazon using my associate code. At no additional cost to you this means I gets a slight kick back if you make a purchase. Thank you! This allows me to continue to produce this blog without sponsors.
Source: retrorack.blogspot.com
0 Comments+ Sharelabels (12)Flag
All1850s1910s1920s1950s2014 runways2016black and goldcocktailgoldgold dresspattern dresstassel

Published:
For the first night of WorldCon I wore my new purple dress from the previous blog. But for the first offical day of the convention I wore this favorite vintage 1950s blue and white day dress. 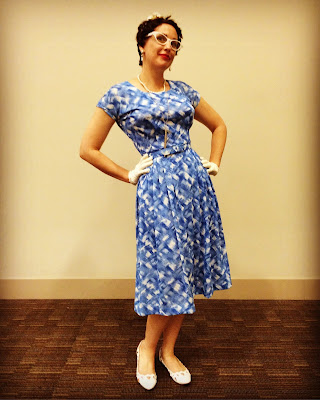 It has a cute little jacket too, but I didn't get a picture of it at this event. Here it is at Comic Con, 4 years ago pre-reack-reduction.

Believe it or not I weigh less in these Comic Con photos, just goes to show what a little less boob will do for a girl's figure. Now where was I?

A Historical Retrospective on Blue & White 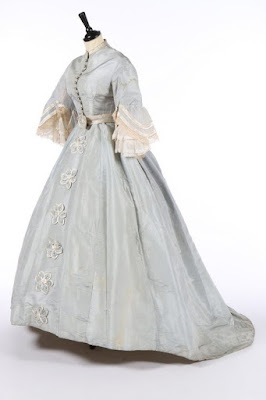 
"A great variety of bright colours is only suited to a carpet. For a dress, two are quite sufficient."
~ The Ladies' Guide to True Politeness and Perfect Manners or, Miss Leslie's Behaviour Book
by Eliza Leslie (1864) 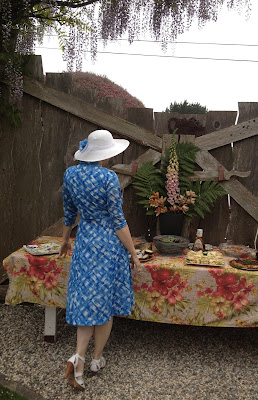 Retro Rack is also on facebook where I post additional images and fashion thoughts.
You can visit the following shopping lists: Travel Dork, My Steampunk, My Wardrobe.
Product links on this blog are usually to Amazon using my associate code. At no additional cost to you this means I gets a slight kick back if you make a purchase. Thank you! This allows me to continue to produce this blog without sponsors.
Source: retrorack.blogspot.com
1 Comments+ Sharelabels (13)Flag
All1760s1850s1860s1870s1900s1930s1950s2013 runwaysblueblue patternconventionpale bluepattern dress

Published:
Fashionable Reader, a reminder that this is not a sponsored post. I don't do sponsors. Which, in this case, turned out to be a good thing. Insert dramatic music here...

So, my eShakti chronicle of the ordering process is in a different blog. It went OK. I hemmed and hawed over hemlines and necklines. Some of the site's UI was annoying.

1. My first bit advice? It is better to know what you want and have it all worked out before ordering, because changing anything later is a pain.

So, if you remember, I wanted dresses to match my two coming covers:

I ordered the teal with short sleeves and a modest V neckline and the lilac with half sleeves and a wide scoop neckline. I also ordered this one on impulse, no modifications possible except a slightly shorter hem.

For all the dresses I entered custom measurements and paid the $8 fee to have each tailored to my top heavy figure.

What happened next? The Good

At first, because I put a note in about my concerns over the neckline of the lilac I had a very good experience.

Two days after I placed my order I received an email from eShakti  with a note and a picture telling me exactly how low that neckline of concern was.  How awesome is that? It turns out it's about 8.5 inches down from the sternal notch, which is way too low for me. I don't even own a bra with a neckline that low!

2. Second bit of advice: utilize the notation box for your order if you have any concerns.

So What Happened? The Bad

I wrote back asking that they switch to the boatneck or the smaller scoop. I asked her opinion on which she thought would work better with the added sleeves. I guess it seemed like I was leaving it up to her to choose. We shall see what happens, for she did not write back again. (*note from the future, it came with the boatneck and is awesome!)

3. Be very clear with your wants and have a back up plan on customization.

I then received an update on my delivery, which was now three weeks from my order date. So that was good to know, if longer than I wanted. If I order again, to be safe, I should leave at least a month before my event.

4. If you have a particular event in mind order at LEAST a month ahead of time to be on the safe side. Because I what happened to me next, I should say a month and a half if you have no other outfit back ups and need to re-order.

Then I got a notification that they were out of the fabric for the dress I needed for the soonest event, the teal.

I had decided on the original dress because it zipped up the back and was so entirely customizable, also it looked to be the best color match to the cover. But, in the end, I'd really prefer it in a deeper jewel tone, so I'm thinking of seeing how this order goes, now, and waiting to determine if they get it in a new colors for the Fall.

It's a risk because they could have nothing to match at all, and I did have two back up options:


But since I have the time, I think I'd rather see the results of this first eShakti order. I made a note to revisit another order in the fall, a month and a half before the book tour for Waistcoats. That's assuming I like the dresses.
However, things continued to spiral.
I got a notification of the refund but it was not for the full amount of the dress. I wasn't certain whether this had to do with the coupon (which was for the first order, not three dresses, and thus shouldn't be effected) or the custom tailoring. In either case, I wrote back, included the original receipt, stating that I should be refunded for the full amount.
Silence.
Four days later (two business days) I call customer service.
Fuzzy hold music for five minutes and then I was forced to leave a message. This is not looking good, ladies.

They called be back near the end of the day and all is well. It was my mistake entirely and they explained how the billing and return credit worked. It turns out that they had given me, at check out, even more of a discount than I originally thought. So hey, that's cool!

The next day they finally responded to my email with the same information. I'm now much happier with the company.

4. Sometimes they will apply special offers even if you don't know about it or ask.
Next up, Fashionable Reader, I will let you know when the two dress arrive how they look and fit the Rack. Yes, I will try to post pictures, although they may be selfies.
Source: retrorack.blogspot.com
2 Comments+ Sharelabels (7)Flag
Allcustomeshaktimeasurementspattern dresspurpleshoppingturquoise