Writing Scenes that Match Your Genre

Writing Scenes that Match Your Genre

One of the first things I learned when I became a Seekervillager ten years ago was that the scene is the building block of the book. A writer uses scenes to progress through the story, building tension and raising the stakes along the way.

For my first several books, I used a method for writing scenes that worked very well. But then I started writing in a new genre and a new point of view. Those major changes made me realize that the way I had been writing scenes wasn’t a “one size fits all” method!

In my historical romances, I change the point of view character with every scene. In my Love Inspired books, I use two POV characters, and in my longer, trade-length stories I use multiple POVs (the hero, heroine, and two or three secondary characters.) 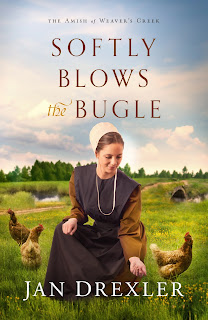 I structure my scenes like a mini book, with a beginning, middle, and an end. I plot the scene with a Goal, Motivation, and Conflict for the POV character, and create the scene with rising tension that comes to a resolution (although not a complete resolution) at the end of the scene. (You can click on the graphic to enlarge it.) 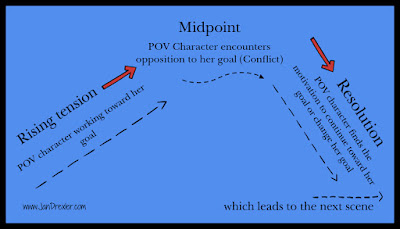 This works well in a romance. The POV characters grow and change in each of their scenes as they interact with the other characters and encounter conflict.

When I tried using my scene-building technique in my cozy mystery, I ran up against a brick wall! What was wrong? Why didn’t it work?

I think the main reason was because of the mystery genre. A mystery requires a limited point of view to keep the reader in the sleuth’s mind. For the first time, I decided to write in first person instead of third person.

When we write in first person, the POV character never changes. We are in Emma’s POV all through the book. This limits the amount of information the reader receives, but it also limits the number of characters we can use to tell the story. I was accustomed to letting my POV characters react to each other as I switched scenes, but with a single POV, I only have Emma’s experiences and reactions to work with.

So, I went to my craft books for help.

I decided to try a method that Dwight Swain recommends in his book, “Techniques of the Selling Writer,” the scene/sequence method. According to Swain, the scene contains the conflict, and the sequel is the transition between the scenes. 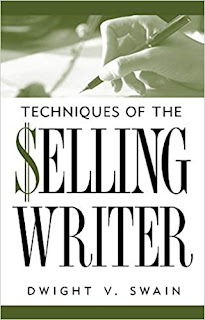 But then I saw this in Donald Maass’s “The Breakout Novelist:”

“There was a time when aftermath passages were considered essential to a novel. Even today, some fiction instructors preach the pattern of scene-sequel-scene. I do not believe in aftermath…I find that most aftermath is the easiest material in any manuscript to skim. It lacks tension.” 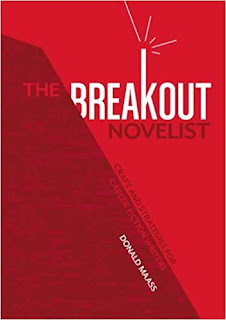 I decided to try it out and see what happens.

The result? I disagree with Maass’s opinion – at least in this case.


The way the scene-sequel-scene pattern works is straight forward.

The Scene is full of action, rising tension, and conflict. It moves the story along with big things happening – things that cause the character to fight for what she believes. 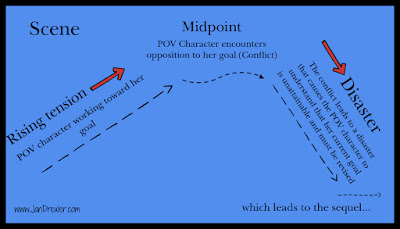 The sequel follows with Reaction, Dilemma, and Decision. 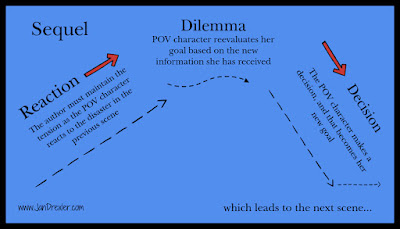 The Reaction is the part that Maass doesn’t like, because he thinks it’s too easy for the tension to sag. Well, I do agree with him on that point, but it doesn’t have to be that way! A clever, talented author (like all of us, right?) can keep the tension high, even in an aftermath.


So, how do we keep the tension high in an aftermath or reaction scene?

Let me show you with this example from my cozy mystery. The setting is a B&B where Emma is working for her Aunt Rose. It is the first day of the season, and the inn is full of guests.

I end one of the early scenes with this disaster:

A man was sleeping on the floor, on his side, facing the wall.

He didn’t move. Was he passed out? Drunk? And why was he in my room?

I circled the sectional thinking I would shake him awake, but when I touched his shoulder he rolled from his side onto his back, his eyes open and staring at the ceiling. I leaned over him.

That’s when it struck me. He wasn’t asleep.

The challenge is to keep the tension high in the reaction. The next chapter starts with the sequel and Emma’s reaction to the disaster.

As she turned toward me, Sam and Nora came down the stairs dressed as if they were planning to party the night away. Annie and Roger were behind them, their casual clothes a contrast to the other couple’s. Finally, Montgomery descended the stairs, pulling on leather driving gloves.

“That’s all of them,” Rose said as Clara joined us. “It was a successful first afternoon, don’t you think?”

“Except for one thing.”

I took a deep breath.

The police come, Emma becomes the prime suspect, and the mystery is on its way.

This scene-sequel-scene method won’t work for every genre.
Think of a suspense novel, where the stakes and tension need to be raised in every scene.

Or a romance, where the stakes need to continue to rise, but there also needs to be a scene here and there where the tension is released, and your characters have a chance to fall in love with each other.

But for the cozy mystery (and other stories with a single main character,) this scene-sequel-scene is perfect. The stakes and tension are raised in the scene, the tension remains high in the sequel, then raise again in the next scene.

What do you think? Let us know your favorite method for writing scenes in the comments!

23 Comments on Seekerville: The Journey Continues: Writing Scenes that Match Your Genre