From HS Creative Writing Assignment to Debut Novel: The Evolution of Matty Redd

From HS Creative Writing Assignment to Debut Novel: The Evolution of Matty Redd

Back when I was in tenth grade, there was a young teaching intern who, in an attempt to excite a less-than-enthused group of teenagers, tasked us with a creative writing assignment unlike any other. Our homework, she explained, was to write a short story about anything we wanted, but here’s where it got fun—nothing was off-limits content-wise, including language, action, violence, you name it.
Back then (though my wife might argue this is true today as well), I was very much the type of fifteen-year-old who, if you gave me an inch, I would take ten miles. Always one to push the boundaries in high school, I went home ready to dive into my assignment, knowing full well that I was going to indeed pack my story full of action, language, and plenty of violence. So I started writing. And soon, a fully fleshed-out character came to me. His name was Matty Redd.
My short story, which I cranked out over the weekend, featured Redd, a young vigilante on a comic book–like quest to rid his school of injustice. There was a lot of language and even more action, which, if I’m honest, was all unnecessary and only added, well, simply because we could. Or so I thought.
Supremely proud of my short story, I turned it in, excited for feedback and to see our teacher’s reaction. She had, after all, given us free rein, and though I was fully aware I pushed the envelope a tad (okay, a lot), there was also a side of me that knew I started the project almost as a joke and ended up writing with conviction and excitement. The class clown back then, I didn’t necessarily want people to know that I tried so hard to produce a complete story, as that wasn’t the “cool” thing to do. And yet, I couldn’t help but wonder what our intern would think of Matty Redd.
As fate would have it, there were a couple things about that assignment I wasn’t aware of when I first sat down to write it. For starters, it came as a big surprise to me when, the next day in class, it was announced that in order to receive peer-to-peer feedback, everyone would randomly be assigned someone else’s paper to read out loud in the class. I can still remember the face of the poor kid who had to read my paper, Matty Redd, in front of everyone. His cheeks turned a deep shade of red, and on several occasions, he stopped to ask our intern if he should keep reading. She let him, but I’m telling you, that moment had all the makings of a Southwest Airlines commercial. You know, the ones that always show someone in an awkward moment which ends with “Wanna get away?” Well, he did. It was brutal.
The second thing I didn’t realize about that assignment was that it had to be reviewed by the teacher. Not the young, cool, hip intern. No. By the actual teacher, and let me tell you something, he did not share his intern’s taste for boundary-pushing teenage crime fiction. The following day, I was called down to the office, where I promptly found my parents, the superintendent, and the principal waiting for me. I wasn’t sure what was going on at first, but the situation went from bad to worse when my principal whipped out a copy of Matty Redd and had my parents read it. That moment, by the way, would have made a great follow-up commercial—as it most certainly had a “Wanna get away?” vibe to it, and not only for me. My parents were embarrassed too, and though I knew I would be in trouble, something funny happened. Of all the times I had gotten in trouble in school, for once, my parents were on my side. Their main point was that, yeah, maybe I took things too far, but after all, that was the assignment, and therefore, because I did what was asked, there shouldn’t be a punishment. The school disagreed and suspended me for a week. It was, for the record, the only suspension where I wasn’t in trouble at home and basically served as a weeklong vacation. Still, I learned my lesson.
Flash forward more than fifteen years later, and something else happened . . .
I thought, back then, as an immature fifteen-year-old, that Matty Redd had come to me as a fully fleshed-out character. I was wrong, though, and in my adult life, armed with a new mindset and more life experiences shaped by getting older, marriage, and even fatherhood, I realized there was a lot about Matthew Redd that I didn’t know. And one day, I started wondering what, all these years later, he might be up to. I knew I wanted to be a storyteller, and as I researched and began shaping plot ideas, it was clear to me that the perfect character to anchor my story was Matty Redd.

Turns out, Matthew Redd was the same guy I always knew, albeit much older and similarly armed with a plethora of new life experiences himself. Over the course of about a year and more than 100,000 words later, I explored who he is but also what message he might want to send. That, coupled with a story idea I had in mind about a mystery set in Montana that would lead to a global conspiracy, turned into Fields of Fire, my debut novel—and the first book in my Matty Redd thriller series—set to hit bookstores on September 6.
I’ve met a lot of people over the years who tell me there’s a story they always wanted to tell or maybe a plot concept they had come up with but never explored because they never got around to it for one reason or another. My message is always the same and one that I truly believe in: Do it! It’s never too late, by the way, so what’s stopping you? There was nothing out of the ordinary about me that led to me being an author. At the end of the day, I’m just an adult version of the same kid who took a creative writing assignment way too far in high school, only now I do it for a living. You can too. Start one page at a time. One chapter a time. Write and don’t give up. First drafts don’t need to be good; that’s what editing and second drafts are for. Just keep at it, and don’t ever give up.
By the way, that same principal—who I greatly admire—who suspended me is now my kids’ principal. And it turns out, Matthew Redd is the gift that keeps giving. Not only did I get a week off school, but I also got a book deal out of him. Who would have thought, right? Moving forward, I can’t wait to see what trouble he gets into next and to finally be able to introduce him to readers. 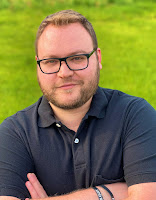 Ryan Steck is an editor, an author, and the founder and editor in chief of The Real Book Spy. Ryan has been named an "Online Influencer" by Amazon and is a regular columnist at CrimeReads. TheRealBookSpy.com has been endorsed by #1 New York Times bestsellers Mark Greaney, Lisa Scottoline, Brad Thor, and many others. A resident of Michigan, along with his wife and their six kids, Steck cheers on his beloved Detroit Tigers and Lions during the rare moments when he's not reading or talking about books on social media. He can be reached via email at Ryan@TheRealBookSpy.com.

About Fields of Fire 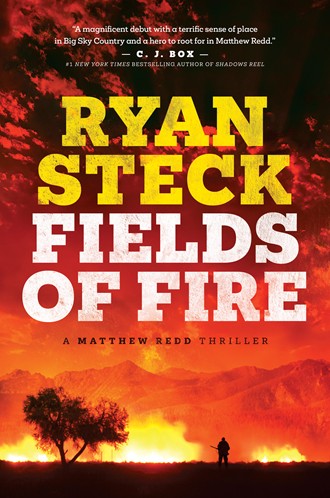 “You know Ryan Steck as the Real Book Spy. Now, get to know him as the author of Fields of Fire, his debut thriller featuring Marine Raider Matthew Redd in a battle that will leave you speechless and begging for more. Lock and load!” —Jack Carr, Navy SEAL Sniper and #1 New York Times bestselling author of The Devil’s Hand
Waiting to be deployed on a critical mission, elite Marine Raider Matthew Redd stops to help a stranger and wakes up hours later to learn his team was wiped out in an ambush. Unable to remember anything, Redd can’t deny the possibility that he’s somehow responsible for the information leak that led to the massacre. He’s given a deal to avoid a charge of treason, but it means walking away from the Corps and the life he loved.
As he faces his loss, Matty gets a cryptic message from his adoptive father, J. B.: “Trouble’s come knocking. . . . Might need your help.” He points his truck home to rural Montana, only to discover that J. B. is dead and the explanation for his death is far from satisfying. Determined to dig up the truth, Redd uncovers a dark global conspiracy with his hometown at the center and no team at his back—except one he might find among past friends, old enemies, and new allies, if he can figure out who to trust.
Releases on September 6, 2022.

8 Comments on Seekerville: The Journey Continues: From HS Creative Writing Assignment to Debut Novel: The Evolution of Matty Redd