Who Makes the Meaning in a Book?

Who Makes the Meaning in a Book?

School ended yesterday. Today is the first day of summer vacation, so I promise you won't have to read middle school-inspired posts for a while after today. But today, we do have one more. I recently read Lord of the Flies with my 8th grade class. The book is old (older than me!) and a lot of people don't like it, but I have so many activities that we do with it, that the book really comes alive. I'm always stunned when students tell me it's one of their favorite books we've read.

This year, after we finished, I asked them to reflect on this quote by the author William Golding.

When asked about the meaning of his book, he replied:

“There have been so many interpretations of the story that I'm not going to choose between them. Make your own choice. They contradict each other, the various choices. The only choice that really matters, the only interpretation of the story, if you want one, is your own. Not your teacher's, not your professor's, not mine, not a critic's, not some authority's. The only thing that matters is, first, the experience of being in the story, moving through it. Then any interpretation you like. If it's yours, then that's the right one, because what's in a book is not what an author thought he put into it, it's what the reader gets out of it.”

I love this answer so much.

I was thinking about it with two different caps on my head - as the teacher who asks students to consider the meaning of the story, but also as an author who is in the business of making meaning out of words.

I was really interested to hear my students' thoughts - both as their teacher and as an author.

It turns out that the line that most spoke to them was  "The only thing that matters is, first, the experience of being in the story, moving through it."

One student, in explaining how she had moved through the story stated, "Through the characters, I got to experience the chaos, the peace, the sadness, and the thrill of everything that happened."

Another said: "In some parts of the book, I felt like I was actually in the book and moving through it. But there were parts where I did not get this feeling. An example where I did not get this feeling is when the hunters went hunting I didn’t really feel the story moving. The part where I felt the story moving along was when everyone was working together and not fighting."

But a third said "There were parts of the book where I felt as if I was really going through the motion of everything and other parts where I was left confused. Some parts that I really connected to were the murders. When both Piggy and Simon died I truly felt like I was there watching it happen."

Another: "I felt like I was  on the island with all the other boys I felt like I was one of the little ones watching everything fold in itself, watching Jack become a brutal savage and watch Ralph losing control and seeing Piggy get killed I really felt part of the story I was reading."

They were also really eager to tell me the meaning they took from the book. I think William Golding would have been proud of the range of thoughts. They took his words to heart: "If it's yours, then that's the right one."

I think this book was about how people can get insane and out of control with an obsession with a passion, they have while others try and prevent it but end up getting hurt in the process.

What are we really without manners and common sense? Savages? That would make us no different than animals. We hide behind a mask of intelligence and basic knowledge to separate how similar we are compared to animals. Without all we have learned, we’re basically just a vessel driven by emotions of hatred and greed. Would we really know right from wrong if we didn’t have common knowledge or at least look like we have the brains? It really felt overwhelming to interpret so much. Then again, it would make sense. The only difference is that we are more evolved than animals. We have the common sense to just go around killing people, there are usually reasons behind it. But sometimes, there isn’t a reason behind it. Does that make us unstable to live in such a “perfect” society? If we compare ourselves to savages, then killing would be completely normal right? Or would it?

I believe the book is really about the true nature of us. How we act when theres no adults or rules around. When we can do anything without being punished since theres no boundaries.

This book is about nothing more than boys trying to survive on their own and trying to keep their insanity (sic) in the process.

While the topic of change was a big message of the book, I do believe there is another main message. Lord of the Flies also shows us the importance of rules and civilization. Once the boys turned away from Ralph all humanity and civilization were lost. They began to become too accustomed to Jack’s uncivilized methods. Without any rules or grasp on humanity boys such as Roger turned from normal kind kids into animals. It was because of this lack of civilization and order that Piggy and Simon died so tragically. It was also why it was so hard for the boys to look at themselves once the navy found them. They knew they could never truly return home because a part of them would always be on that island.

So why am I talking about this today?

Because as a teacher, I am privileged to have the opportunity to really talk to readers about their reading, and that is invaluable to me not only as their teacher, but as an author. Hearing what matters to them as readers, learning how invested they were in making their own meaning from the books gives  author me something to ponder.

As authors, are we trying to impose our meaning on our readers? Are we heavy-handed with our message, or do we wield our pen delicately, giving the reader options, offering a chance for them to create their own message from our books. Especially if it's a message they need in their lives.

As I was pondering this, I was also thinking about a book I had recently read. Because I could really relate to the widowed character, I probably took a completely different meaning from the book than a different reader would - and I appreciated the nuances of the character that allowed me to do so.

And that leads me to thinking about craft and how we make our books the best possible experience for readers because, to quote another student,

He didn't write the book to give it a specific ending (message) but to entertain the readers.

And of course that is what we have to keep at the forefront as we write.

One of my students was rather succinct in describing Golding's craft.

Mr. Golding used good words to set the mood for the story.

As writers, that is our task, to use good words to entertain.

If only it could be that easy!

But easy or not, it is the responsibility we assumed when we chose to write stories. Our good words have the power to affect readers.

One of my students commented: "The experiences of reading books helps us to open our eyes to different wonders in imagination. It leads us to creating our own works and maybe inspiring others."

And to finally quote a wise student - "That is the great thing about reading."

And we get to inspire that. How lucky are we to be writers???

I'd love to hear your thoughts - as readers and writers. 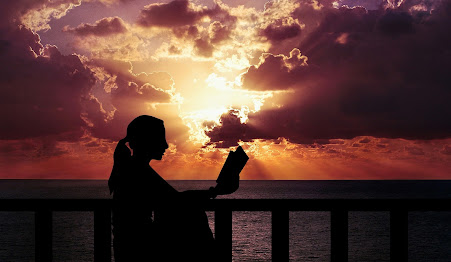 8 Comments on Seekerville: The Journey Continues: Who Makes the Meaning in a Book?

Report "Who Makes the Meaning in a Book?"