Populating Your Story with Background Characters

Populating Your Story with Background Characters 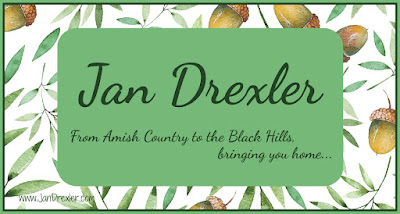 We all enjoy the secondary characters in stories, right?

The heroine’s best friend, the hero’s fun younger brother, the sidekick, the pal, the mentor.

These characters are necessary to your story. They provide someone for your characters to confide in and someone to push your hero or heroine to make the move toward romance or toward the next plot point in your story.

But what about the background characters?

First, let’s define what a background character is. 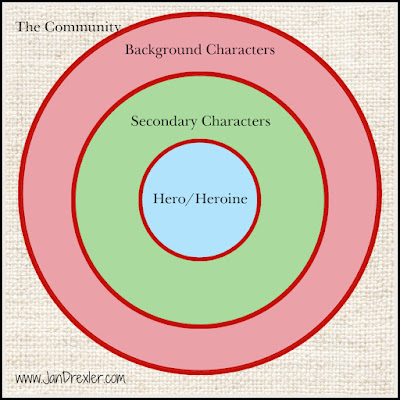 These are characters who populate the third circle of your cast. They are more than a part of the community, but they don’t have as much of a relationship with your hero/heroine as your secondary characters.

But what purpose do they serve?

Unlike the secondary characters, background characters aren’t there to influence the story or your main characters. They provide a balance, a mood, or sometimes a way to ease or increase the tension of a scene.

They can also be a vehicle to give your story a reason to progress through the next scene, like an older couple in my Christmas novella, “An Amish Christmas Recipe Box.”

Let’s look at a couple background characters from fiction as examples.

First, there’s Rosie Cotton from Tolkien’s Lord of the Rings trilogy. If you’ve read the books or seen the movies, you know Rosie. Sam is in love with her – we know that from the beginning – but he doesn’t feel that he can “speak” for her quite yet. Her character is part of the community, and yet a little bit more. She doesn’t influence the story like a secondary character would, but she influences Sam. In a very subtle way, we know that she is his unstated and secret motivation to come home from the quest, and his hope for the future.

Another one is Mrs. McGregor from Peter Rabbit. She doesn’t play an active role in the story, but she is there. She is pictured in the third illustration in the book, along with Mrs. Rabbit’s ominous warning to Peter: “Your Father had an accident there; he was put in a pie by Mrs. McGregor.” That seemingly innocent act of fixing dinner for her family immediately cast Mrs. McGregor as the accomplice to murder! From that point on she isn’t mentioned again, but she is there, symbolizing the fate of careless rabbits who wander into the wrong garden. 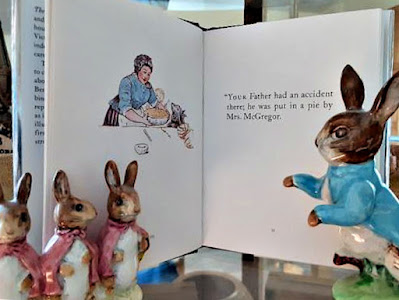 Background characters are important to your story, and they should be crafted with care. You don’t need to develop them with the same depth as your main and secondary characters, but they should have their own lives and personalities.
I’d like to introduce you to a background character in my Work-in-Progress, the second installment in my Sweetbrier Inn Mysteries. Her purpose in the story is simple – I have two artists who are at odds with one another as secondary characters, and neither one is very likeable. This character, Debbie, is also an artist, but I made her the kind of person you could sit down and enjoy a cup of tea with. She’s the counterbalance to the other two characters.

Here’s her introduction in the book:

“Good afternoon,” I said to the older couple. “You must be Rick and Debbie Harris.”
“That’s right.” Rick smiled at me, his graying beard unable to hide the friendly gesture. “We’re sorry we’re late, but we hadn’t expected the Dignity statue in Chamberlain to be so captivating.”
“Have you seen it?” Debbie asked. When I shook my head, she went on. “You have to. It is so beautiful and conveys the dignity of the Native Americans perfectly in the graceful lines of the woman. Like a dancer captured in motion.”
Her hands fluttered in the air as she spoke as if she was trying to express the movement that the statue could only represent. Her gently curled silver hair with strands of gold lowlights added to the ethereal quality of her description.
“I’m sorry.” She laughed as her hands dropped to her side like birds coming to roost on a branch. “I get carried away sometimes.” She shook her head as she laughed again.

We will see Debbie often as the story progresses since she and her husband are guests at the bed and breakfast where the book is set. She is part of the background and provides texture to the cast of characters. She might even provide some insight into the motive for the murder.

Have you given a thought to the background characters in your story?

Tell us about your favorite background character, either in your own work or in a favorite book or movie in the comments. 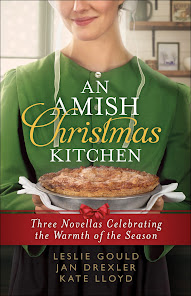 As the weather grows cold and the nights grow long, the cheer and warmth of the Christmas season is one thing all readers can find comfort in. This collection from bestselling Amish fiction novelists Leslie Gould, Jan Drexler, and Kate Lloyd finds the beating heart at the center of the holiday and offers three novellas that celebrate family, faith, and especially the sights and smells of a bustling holiday kitchen.Leslie Gould tells the story of how, in the wake of a heartbreaking loss, a young Amish woman finds unexpected comfort and hope in a yearly baking tradition surrounding the local Lancaster Christmas market. Jan Drexler offers a sweet tale of a shy Amish woman who decides to use her gift for sweets to woo a local Amish boy with her beloved Christmas cookies. And Kate Lloyd offers a heartwarming tale of a woman's unexpected discovery about the truth of her past, and the warm and welcoming Amish family table she finds herself invited to on Christmas.
The giveaway is for a physical copy of the collection (US addresses only) or an e-copy of either the collection, or Jan's story alone (wherever Amazon will send the e-book.)
Source: seekerville.blogspot.com
+ Sharelabels (3)Flag
AllJan DrexlerWriting Tipscharacters

27 Comments on Seekerville: The Journey Continues: Populating Your Story with Background Characters